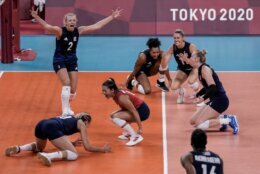 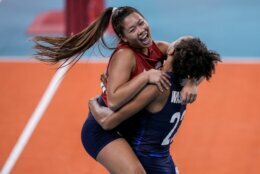 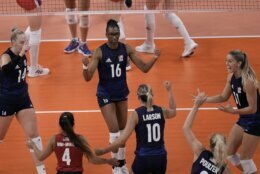 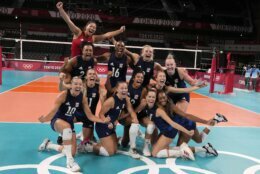 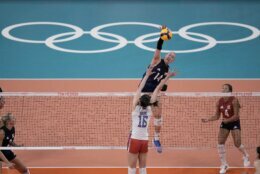 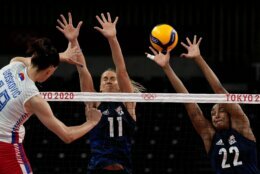 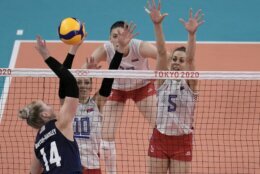 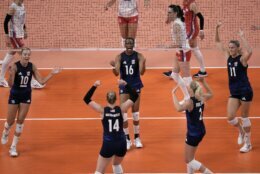 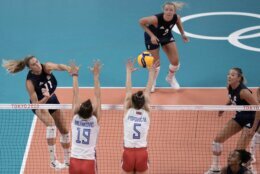 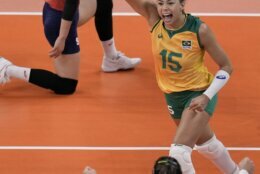 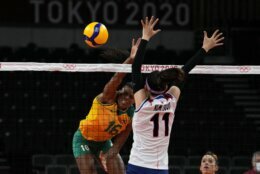 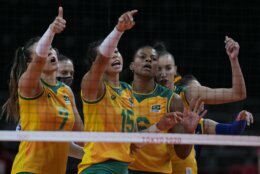 TOKYO (AP) — U.S. volleyball star Foluke Akinradewo Gunderson woke up with a vision that her team was poised to make it back to the gold medal game.

Five years after Akinradewo Gunderson could only watch the end of a crushing five-set loss to Serbia in the Olympic semifinals because of an injured knee, she helped lead her team one step closer to the ultimate prize.

Akinradewo Gunderson provided key blocks at the net, her best attacking match of the tournament and emotion to help the U.S. make it to the gold medal match for the fourth time ever by avenging a 2016 semifinal loss to Serbia with a 25-19, 25-15, 25-23 victory Friday.

“I just felt it,” Akinradewo Gunderson said. “I just felt trust in our group. It was just a feeling I had. Actually I’ve never felt that before, to be honest. But this morning I woke up and I was like: ‘We’re going to do this. We’re going to get it done.’ I’m glad that came to fruition.”

The Americans easily dispatched the team that denied them a chance at their elusive first gold medal in Rio de Janeiro. They advanced to the gold medal match against Brazil, which beat South Korea in straight sets in the other semifinal.

Serbia will play South Korea for the bronze after beating the U.S. in five sets in Rio in a loss that haunted the U.S. players and staff.

“It wasn’t like, ‘Oh we have to get redemption of this or that,’” Akinradewo Gunderson said. “It was we just want to win a gold medal and whatever that’s going to take, we’re going to do that.”

The U.S. played from ahead for most of the match thanks to a strong serving performance by Akinradewo Gunderson to open the game.

The Americans earned nine set points in the opening frame, when Jordan Larson scored on a block at the net. After squandering its first four chances, the U.S. took the set on a kill by Akinradewo Gunderson, whose knee injury five years ago against Serbia contributed to the loss.

Akinradewo Gunderson let out a scream after winning the second set with a block at the net and came up with another key block late in the third.

Larson then won it with a kill that Serbia couldn’t return and fell to her knees in celebration as her teammates poured onto the court.

Larson and Akinradewo Gunderson are three-time Olympians who have played major roles in the success of the Americans the past decade. Now with their international careers likely nearing the end, they have one more shot at the prize that has eluded them.

It would make all the work they put in during the coronavirus pandemic, working out in their garages and building team chemistry through monthly Zoom calls with a performance coach, pay off.

“I don’t know if I’ve come to words yet on the how to express it, but like Foluke said, we put in a lot of work off the court and it’s paying dividends now,” Larson said. “We committed to that as a team. You’re seeing that now. You’re seeing it pay off and that all those conversations that happened a year and a half ago when everything was shut down, this is for it.”

The U.S. has been one of the top teams in the world for much of the past two decades but has been unable to attain the ultimate prize, losing to Brazil in the gold medal match in both 2008 and ’12. The U.S. also lost the gold medal game to China in 1984.

The Americans came into Tokyo as the top-ranked team in the world, and coach Karch Kiraly’s squad has played up to that standard despite dealing with a couple of key injuries.

Setter Jordyn Poulter returned after missing the quarterfinal match with an ankle injury, but opposite Jordan Thompson sat out her third straight match with an injured right ankle.

Replacement Annie Drew stepped up again and led the team with 17 points.

Serbia was looking to return to the gold medal game after losing the final to China in 2016. The Serbians had swept five of their first six matches in Tokyo, losing only once, in four sets to Brazil, but had little answer for the Americans.

Brazil was dealt a blow before the match when Tandara Caixeta was sent home after she was suspended in a doping case. Tandara was a member of Brazil’s gold medal team at the 2012 London Olympics.

Brazil’s Olympic committee says Tandara is provisionally suspended for a potential violation of anti-doping rules. The case relates to a sample taken a month ago in Brazil in a pre-Olympic training camp.

A message posted on Tandara’s Instagram account says the athlete will speak about the case after it is concluded.

Brazil overcame that and knocked out South Korea to remain the only team in the men’s or women’s tournament to be undefeated through seven. Brazil has lost just four sets at the Olympics and is seeking its third gold medal in the past four Olympics.

South Korea is seeking its second medal ever after winning bronze in Montreal in 1976.

On the men’s side, the Russians will take on France for the gold medal on Saturday after Brazil faces Argentina for the bronze.

US stock indexes recover from a midday slump and turn higher