The ruling revolves around a dispute between Beshear and the GOP-led legislature over the scope of the governor’s executive authority in times of emergencies. It comes as COVID-19 cases and hospitalizations are surging in Kentucky.

The governor lifted most of his pandemic restrictions in June. But with COVID-19 cases spiking due to the delta variant, he signed a recent executive order imposing an indoor mask mandate in K-12 schools, child care and pre-kindergarten programs across Kentucky.

One of the contested laws limits the governor’s executive orders in times of emergency to 30 days unless extended by lawmakers.

— Though young and healthy, more unvaccinated in U.S. die of COVID-19

LA CROSSE, Wis. — A high-ranking Roman Catholic cardinal is off a ventilator and moving out of intensive care, according to officials at a Wisconsin shrine founded.

Cardinal Raymond Burke was to return to a regular hospital room Saturday at an undisclosed location, the Shrine of Our Lady of Guadalupe in La Crosse said in a statement.

Burke, 73, one of the Catholic Church’s most outspoken conservatives and a vaccine skeptic, had been sedated and on a ventilator following his tweet Aug. 10 that he had contracted the coronavirus.

He spoke out against mandatory vaccinations in May 2020, and said some in society want to implant microchips in people.

PARIS — Thousands of protesters are marching again in cities and towns across France against a COVID-19 health pass required to enter restaurants and cafes, cultural and sports venues.

For a sixth straight Saturday, opponents denounced what they see as a restriction of their freedom. Many have criticized the measure, claiming the French government was implicitly making vaccines obligatory.

In Paris, four demonstrations were organized by different groups. Elsewhere in the country, over 200 protests were taking place.

Despite the protests, polls have shown the majority of French people support the health pass. More than 40.5 million people in France, or 60%, are fully vaccinated.

Since last month, France is registering a high number of infections — about 22,000 each day.

MONTGOMERY, Ala. — U.S. Rep. Barry Moore of Alabama says he and his wife have been diagnosed with the coronavirus. The congressman disclosed the diagnosis in a post on social media. He says he’ll continue to work virtually as much as he can while recovering in quarantine.

The Republican congressman encouraged people to discuss vaccines and treatments with their medical providers. Alabama is seeing a surge in virus cases and hospitalizations that medical officials say is fueled by the highly contagious delta variant and low vaccination rates in the state.

BERLIN — Austria’s government says it may limit access to nightclubs to people who have been vaccinated against COVID-19 if infections rise in the fall.

Like many other European countries, Austria is seeing coronavirus infections increase as the delta variant takes hold, particularly among younger people who haven’t been fully vaccinated.

Currently, people need to have been vaccinated or have a recent negative PCR test to enter nightclubs.

A joint statement Saturday from the chancellery and the health ministry says a vaccinated-only approach may be necessary in the fall if infection rates continue to rise and the number of vaccinated young people remains relatively low. It pointed to a “particular risk of so-called superspreader events” as social life moves indoors after the summer.

WASHINGTON — President Joe Biden’s job approval rating has ticked down and Americans are taking a less positive view of his handling of the coronavirus pandemic.

That’s according to a new poll from The Associated Press-NORC Center for Public Affairs Research. The survey shows Biden’s overall job approval rating dipping from 59% last month to 54%. The public’s assessment of his handling of the pandemic has fallen even further, down from 66% support in July to 54%.

That coincides with increased COVID-19 cases in the United States and stalled vaccination rates. Jeanette Ellis-Carter, 69, wants to see Biden push for more vaccine mandates across the nation. Despite being fully vaccinated, the Cincinnati resident recently contracted COVID-19 and worries that without vaccine requirements, more Americans will be at risk of getting sick.

“When I was a child in school, we were mandated to get the polio shot, measles. What’s any different about this?” she said.

Republican officials have led the opposition to the vaccine and mask measures the Biden administration has put in place this summer. Some Republican governors are opposing masks in schools.

MONTGOMERY, Ala. — Health officials in Alabama say they are seeing a spike in cases among young adults and children as the highly contagious delta variant sweeps through unvaccinated populations.

“There is no question that the average age of people who are being hospitalized is going down,” State Health Officer Scott Harris said. The Alabama Hospital Association said this week 85% of hospitalized COVID-19 patients are unvaccinated.

EUGENE, Ore. — Oregon and Oregon State became the first Power Five schools to announce they will require proof of vaccination or a negative coronavirus test for people over age 12 to attend football games.

Oregon says the decision was made with public health authorities and “peer institutions in the state.” The mandate goes into effect Monday and comes at the end of a week when state officials warned of rapidly filling hospitals as daily reported cases reached record numbers.

The Oregon football team opens its season at 54,000-seat Autzen Stadium in Eugene on Sept. 4 against Fresno State. Oregon State begins its home schedule at Reser Stadium on Sept. 11 against Hawaii.

NEW YORK — The sounds of song will be ringing out from Central Park, with thousands expected for a superstar-laden concert meant to celebrate New York City’s recovery from the coronavirus.

Bruce Springsteen, Paul Simon, Jennifer Hudson, Carlos Santana, LL Cool J and Andrea Bocelli are among the performers at what is being billed as the “Homecoming Concert.”

Despite the joyful intention, the concert is taking place when there are worries over the contagious delta variant of COVID-19. According to state statistics, New York City has averaged just under 2,000 new cases of coronavirus a day over the past week. Those who attend the concert must show proof of vaccination.

ORLANDO, Fla. — The mayor of Orlando is asking residents to stop watering their lawns and washing their cars for at least a week.

Mayor Buddy Dyer says water usage needed to be cut back because of the recent surge of COVID-19 hospitalizations. The Orlando Utility Commission treats the city’s water with liquid oxygen and supplies that ordinarily go toward water treatment have been diverted to hospitals for patients suffering from the virus.

The city-owned utility typically goes through 10 trucks of liquid oxygen a week, but its supplier recently says that could be cut back to five to seven trucks a week to accommodate hospitals.

Officials at one of the Orlando area’s largest health care systems said this week they had 1,620 patients hospitalized with COVID-19, twice what it was during last winter’s peak high for AdventHealth.

SYDNEY — Authorities in Australia say more than 250 people have been arrested while protesting coronavirus lockdowns in the country. Many faced fines for defying health orders.

The protests took place Saturday in several cities nationwide, with the largest and most violent protest in Melbourne. At least seven police officers were treated for injuries after skirmishes broke out at some of the protests.

Sydney has been in lockdown for two months, while Melbourne and Australia’s capital, Canberra, went into lockdown earlier this month. Under the rules of the lockdown, people are mostly confined to their homes and have limits placed on their social interactions.

Protestors say the lockdowns should end, but authorities say they are necessary to suppress the spread of the virus and save lives.

BERLIN — New coronavirus infections in Germany have reached their highest level in nearly three months amid a steady rise powered by the delta variant.

The national disease control center, the Robert Koch Institute, says Saturday that 51.6 new cases per 100,000 residents were reported over the last seven days. It’s the first time since May 25 that the infection rate has been above 50, but it has been increasing since hitting a low of 4.9 in early July.

The disease control center says 8,092 new cases were reported over the past 24 hours — up from 5,644 a week earlier. More cases are getting detected as summer vacations end and children return to schools in some parts of Germany.

German authorities have been trying to reinvigorate the country’s vaccination drive, which has slowed considerably. Official figures showed that 63% of Germany’s population had received at least one vaccine dose as of Thursday and 58% was fully vaccinated.

HANOI, Vietnam — Vietnam’s government says it is sending troops to Ho Chi Minh City to help deliver food and aid to households as it further tightens restrictions on people’s movements amid a worsening surge of the coronavirus.

The army personnel will be deployed to help with logistics as the city of 10 million people asks residents to “stay put” for two weeks starting from Monday, a report on the government website said Friday.

The move comes as Vietnam, which weathered much the pandemic with very few cases, recorded more than 10,000 new infections and 390 deaths on Friday. Ho Chi Minh City accounted for 3,500 of those infections.

Ho Chi Minh City has had strict coronavirus measures in place since June, including banning gatherings of more than two people in public and only allowing people to leave home for essential matters like buying food or going to work in certain permitted businesses. Under the new measures, people in high risk areas cannot leave home at all.

HONOLULU — A hospital serving a Honolulu suburb has filled up as the community faces a surge of COVID-19 cases.

All 104 beds at The Queen’s Medical Center-West Oahu are full, said Jason Chang, the CEO of The Queen’s Health Systems.

The Ewa Beach hospital has sent some patients to its sibling facility in downtown Honolulu. It’s also asked staff from other parts of the Queen’s system to come help.

The city has set up a triage tent outside the hospital that has 25 cots. The hospital may add beds in hallways and other makeshift areas but not all patients will get rooms.

Chang says the hospital had 63 patients in its emergency room at one time, which is a crisis given the hospital only has 24 ER beds. Twenty-six of those in the ER were there with possible COVID-19 infections. 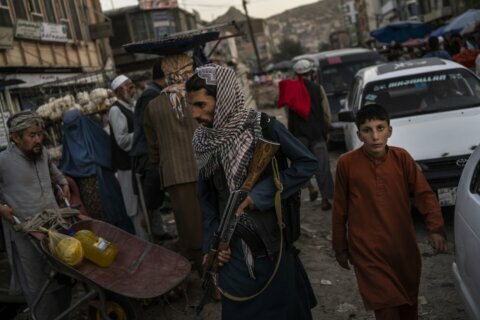