TOKYO (AP) — A roundup of gold medals from Sunday, August 1, at the Tokyo Games:

Worthington crashed on her first run, but pulled out all the stops in her second. The 25-year-old added a front flip to her 360 backflip and closed with another backflip for a 97.5.

Switzerland’s Nikita Ducarroz took bronze with an 89.2 in her second run.

Australia’s Logan Martin capped quite a show in BMX freestyle’s Olympic debut, putting together a sterling first run to win gold at the Tokyo Games.

The 27-year-old two-time world champion posted a 93.3 in his first ride and watched as the other eight riders failed to catch him. Martin went for a victory lap after the final rider made his second run, but cut it short after a hard landing on a jump.

Venezuela’s Daniel Dhers secured silver with a 92.05 on his second run and Britain’s Declan Brooks had a second-run 90.8 to take bronze.

Shi has now won four gold medals in her career, the latest in a long line of dominant Chinese divers.

The French men’s foil team avenged its loss in the 2016 Olympic final by beating a trio of Russians for a gold medal in Tokyo.

The ROC still finished the fencing slate with eight medals and four golds.

The United States team of Alexander Massialas, Race Imboden and Gerek Meinhardt won the bronze with a 45-31 victory over Japan.

Xander Schauffele won the Olympic gold medal in golf in a tense finish.

Schauffele was tied for the lead with Rory Sabbatini of Slovakia with two holes to play.

Sabbatini set an Olympic record with a 61 and won the silver. Hideki Matsuyama missed a 12-foot birdie putt on the last hole that would have secured him the bronze. He was in a seven-man playoff for the final medal.

Dolgopyat and Zapata were both awarded a score of 14.933 during the event finals. They both had matching execution scores during their routines. Dolgopyat earned the gold because his set was slightly more difficult than Zapata’s.

Xiao Ruoteng of China earned the bronze for his third medal in Tokyo. He took silver in the men’s all-around and won a bronze during the team event last week.

Whitlock led off the eight-man final and posted a score of 15,583 points. That is the highest of any male or female gymnast on any event so far at the Tokyo Games.

Lee Chih Kai of Taiwan took silver to earn the first-ever medal for his country in gymnastics.

Kazuma Kaya of Japan took the bronze to earn a second medal to go with the silver he won in the team competition.

Nina Derwael of Belgium won the gold medal in the uneven bars and Olympic all-around gymnastics champion Sunisa Lee added a bronze medal to her haul at the Tokyo Games.

The 18-year-old Lee’s total of 14.500 points was good enough for third behind Derwael and Russian athlete Anastasiia Iliankova.

Lee’s bronze gives her three medals so far at the Ariake Gymnastics Centre.

Brazilian gymnast Rebeca Andrade added a gold medal on vault to go with the silver she earned in the all-around.

Andrade put together a pair of soaring vaults to post an average of 15.083. The medals she won in Tokyo are the first and second ever for Brazil in gymnastics at the Games.

American MyKayla Skinner, who entered the competition after defending Olympic champion Simone Biles pulled out to focus on her mental health, captured the silver.

Australian Matt Wearn has won gold in the men’s one-person laser event at the Tokyo Olympics.

He finished second in the medal race, scoring four points, which was enough for the win.

Jean Baptiste Bernaz of France won the medal race at Enoshima Yacht Harbor, but his total score of 92 meant that he finished sixth overall.

Hermann Tomasgaard scored 85 to clinch the bronze, giving Norway its first medal in sailing since 2004.

Rindom finished seventh in the medal race, but clinched gold with 78 points total.

It’s the first gold medal for Rindom, who won bronze in the same event in 2016.

Sweden’s Josefin Olsson crossed the finish line first but took silver with 81 points. Marit Bouwmeester of the Netherlands had to return to the start at the beginning of the race, but managed to win bronze. She won silver in London in 2012 and gold in Rio in 2016.

American Caeleb Dressel cruised to a relatively easy victory in 50-meter freestyle, touching in an Olympic record of 21.07 seconds.

France’s Florent Manaudou repeated as the Olympic silver medalist in 21.55, while Brazil’s Bruno Fratus claimed the bronze in 21.57 — edging out American Michael Andrew for the final spot on the podium.

Australia’s Emma McKeon claimed the gold medal in the women’s 50-meter freestyle at the Tokyo Olympics.

McKeon completed a sweep of the 50- and 100-meter freestyle with an Olympic-record time of 23.81 seconds. The silver went to Sweden’s Sarah Sjöström in 24.07, while defending Olympic champion Pernille Blume of Denmark settled for bronze in 24.21.

Just as he did in winning the 800-meter freestyle, Finke stayed closed throughout the 30-lap race and turned on the speed at the end. He touched in 14 minutes, 39.65 seconds.

Capping a brilliant performance by the entire Aussie women’s team, Emma McKeon followed her victory in the 50-freestyle earlier in the session to take the butterfly leg on the relay. Cate Campbell closed strong on the freestyle, touching in an Olympic record of 3 minutes, 51.60 seconds to edge the two-time defending champion Americans.

Kaylee McKeown and Chelsea Hodges started things off for the winning Australian team.

Abbey Weitzeil touched in 3:51.73 to give the United States a silver. She anchored a team that also included teenagers Regan Smith, Lydia Jacoby and Torri Huske.

The bronze went to Canada.

American Caeleb Dressel swam the butterfly leg as the Americans set a world record in the 4×100-meter medley relay with a time of 3 minutes, 26.78 seconds. That eclipses the mark of 3:27.28 they set at the 2009 Rome world championships in rubberized suits.

The top-seeded Czech team of Barbora Krejcikova and Katerina Siniakova won gold in women’s doubles at the tennis tournament.

Laura Pigossi and Luisa Stefani of Brazil took the bronze in doubles.

Fifth-ranked Alexander Zverev of Germany won the gold medal in men’s singles at the Olympics.

Zverev beat Karen Khachanov of the Russian Olympic Committee 6-3, 6-1 for the biggest title of his career.

It followed a comeback victory for Zverev over top-ranked Novak Djokovic in the semifinals. Pablo Carreno Busta of Spain won bronze Saturday.

Marcell Jacobs won the men’s Olympic 100-meter race, crossing the line in 9.8 seconds to bring the marquee sprint gold to Italy for the first time.

Even in a race with no clear favorites, Jacobs was a surprise. He topped America’s Fred Kerley and Canada’s Andre DeGrasse to take the spot held for the past 13 years by the now-retired Usain Bolt.

Born in El Paso, Texas, Jacobs moved to Italy as a young boy when the U.S. military transferred his dad to South Korea. He was a long-jump specialist for years, and his biggest major success was an indoor 60-meter win at European champions.

Mutaz Barshim of Qatar and Gianmarco Tamberi of Italy tied for the gold medal in the men’s high jump at the Tokyo Games.

Both men were clean at every attempt to 2.37 meters and both missed all three attempts at the Olympic record of 2.39.

The 30-year-old Barshim was the silver medalist at the 2016 Rio de Janeiro Games and was also on the podium at the 2012 London Games. He won the world championship gold medal at home in Qatar in 2019.

Maksim Nedasekau of Belarus won the bronze medal. He also cleared 2.37 for a national record.

Gong Lijiao of China won her first Olympic gold medal in the shot put with a personal best of 20.58 meters.

The reigning two-time world champion produced two efforts over 20 meters on her last two attempts at the Olympic Stadium to cement her victory ahead of Raven Saunders of the United States, who took the silver medal with 19.79.

Veteran Valerie Adams of New Zealand won a bronze medal with 19.62 in her fifth and likely last Olympics.

Yulimar Rojas of Venezuela set a world record with her final attempt to win the women’s triple jump gold medal at the Tokyo Olympics.

Rojas finished the competition with a mark of 15.67 meters to break a record set in 1995. Inessa Kravets of Ukraine held the record at 15.50.

Rojas broke the Olympic record of 15.39 with her first attempt in the final. The two-time world champion won a silver medal at the 2016 Rio de Janeiro Olympics.

Neisi Dajomes of Ecuador has won the women’s 76-kilogram weightlifting event as Kate Nye took silver for the United States’ best result in the sport since 2000.

It’s Ecuador’s second gold of the Tokyo Olympics after Richard Carapaz won the men’s cycling road race, and only the South American nation’s fourth medal of any sort in history.

Aremi Fuentes took bronze for Mexico on a total 245kg. 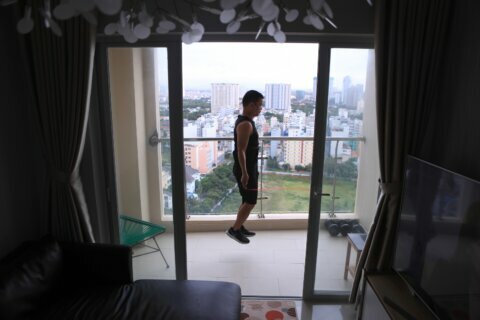