TOKYO (AP) — A roundup of gold medals from Friday, August 6, at the Tokyo Games:

The U.S. pair beat Mariafe Artacho del Solar and Taliqua Clancy of Australia 21-15, 21-16 for the championship on Friday. It’s Ross’ third medal in as many Olympics, to go with the silver she won in London and a bronze from Brazil. Klineman is a first-time Olympian.

The silver for Australia was its first beach volleyball medal since Natalie Cook and Kerri Pottharst took gold on Bondi Beach in Sydney in 2000.

In the bronze medal match, Switzerland’s Joana Heidrich and Anouk Verge-Depre cruised to a straight-set victory over Latvia.

La Cruz and teammates Roniel Iglesias and Arlen Lopez have all won their second career gold medals in Tokyo after moving up to a higher weight class. La Cruz was the light heavyweight gold medalist in Rio de Janeiro, and Lopez succeeded him to claim gold in that class in Tokyo.

In the Madison, teams of two riders are on the track at once but only one rider is considered in the race. They are allowed to tag each other at any point in the 120-lap event with points awarded at the finish of every 10 laps.

It was a replay of the past two world championship finals, each won by Lavreysen. But it appeared as if Hoogland would finally get the better of his teammate when he held on to win their first race.

The Netherlands defeated Argentina 3-1 to claim the gold medal in women’s field hockey.

Caia van Maasakker scored two goals for the Dutch, who claimed silver in 2016.

The Netherlands rolled through pool play with a 5-0 record, outscoring their opponents 18-2. They won their quarterfinal 3-0 over New Zealand and their semifinal 5-1 over Britain.

In the bronze medal match, Grace Balsdon scored the winner on a penalty corner early in the fourth quarter to help Britain defeat India 4-3.

Kiyuna was given a score of 28.72 for his demonstration of karate forms. His score topped the 27.66 recorded by Quintero, who went first in the final.

Neither karateka could score a point in the three-minute bout, but Preković was chosen as the winner by three of the four judges on the tatami.

The 25-year-old Preković won the world championship at 61 kilograms in 2018. Her gold medal is the second of the Tokyo Olympics for Serbia.

Aghayev’s silver is the first non-bronze medal in Tokyo for Azerbaijan, but he fell just short of winning his nation’s eighth-ever Olympic gold.

Kate French of Britain won the gold medal in modern pentathlon and set an Olympic record along the way.

Laura Asadauskaite of Latvia took silver and Sarolta Kovacs of Hungary got bronze at the Tokyo Games.

French is the second British athlete to win the women’s modern pentathlon at the Olympics. Stephanie Cook won it at the 2000 Sydney Games.

Garnbert finished fifth in the speed discipline, her weakest event, then topped two of three “problems” to win bouldering. The 22-year-old capped a muggy night at Aomi Urban Sports Park by reaching 37 holds to win lead and wrap up gold.

The six-time world champion finished with five points — the total of her finishes multiplied together — to beat Japan’s Miho Nonaka by 31 points.

Japan’s Akiyo Noguchi had 48 points to take the bronze.

Dawid Tomala of Poland won gold in what might be the last 50-kilometer race walk at the Olympics.

Tomala won in 3 hours, 50 minutes and 8 seconds in Sapporo for the gold medal.

Jonathan Hilbert of German was second, 36 seconds behind Tomala in 3:50:44. Evan Dunfee of Canada was third in 3:50:59. The race walking events were moved to Sapporo because of Tokyo’s summer heat and humidity.

The 50-kilometer walk has been dropped from the schedule for the next Olympics in Paris in 2024 and may not return.

Palmisano won the race, one of the long-distance road events moved to Sapporo in a bid to escape the Tokyo heat, in 1 hour, 29 minutes and 12 seconds.

She was 25 seconds ahead of Sandra Lorena Arenas of Colombia and 45 seconds clear of 2016 Olympic gold medalist and three-time world championship winner Liu Hong of China, who settled for bronze.

Italy has surprisingly won the men’s 4×100-meter relay to give Marcell Jacobs his second gold medal of the Tokyo Games.

Jacobs won the men’s 100-meter title last Sunday in the first Olympics in the post-Usain Bolt era and was part of the team that won the sprint relay in a national-record 37.50 seconds.

The Italians edged Britain by 0.01 and Canada took bronze in 37.70. It was Italy’s first Olympic medal in the relay since a bronze at the 1948 London Olympics.

China placed fourth ahead of Jamaica.

Joshua Cheptegei of Uganda won the gold medal in the men’s 5,000-meter race a week after earning silver in the 10,000 at the Tokyo Games.

Chepetgei was in the leading pack for most of the race and won in 12 minutes, 58.15 seconds.

Mohammed Ahmed of Canada surged into second place to get the silver medal in 12:58.61 and Paul Chelimo of the United States picked up bronze in 12:59.05.

Chelimo was a silver medalist in the 5,000 at the 2016 Rio de Janeiro Olympics. He dived across the line to edge Nicholas Kipkorir Kimeli of Kenya.

Felix now has more Olympic track and field medals than any woman in history. She came into the Tokyo Games even with Jamaican runner Merlene Ottey.

Marileidy Paulino of the Dominican Republic finished second a full .84 seconds behind Miller-Uibo.

The Jamaican women added the 4×100-meter relay title to their Tokyo Olympic collection after sweeping the podium in the 100-meter final.

The Jamaican team won in a national-record 41.02 seconds. It was the second-fastest time in history and ended the U.S. team’s push for a third consecutive Olympic gold in the event.

Elaine Thompson-Herah won the 100 meters on Saturday in an Olympic record. Shelly-Ann Fraser-Pryce was second and Shericka Jackson was third in that race. Those three joined Briana Williams as the Jamaicans added the Olympic relay title to their world championship gold in 2019.

Faith Kipyegon of Kenya won the 1,500 meters and retained her Olympic title as Sifan Hassan’s chase for three gold medals withered in her fifth of six races at the Tokyo Games.

Kipyegon won in an Olympic-record time of 3 minutes, 53.11 seconds. Laura Muir of Britain took the silver in 3:54.50 and Hassan clung on for bronze after she started fading on the back straight.

Hassan already has a gold in the 5,000 meters and could still complete a rare set if she wins a third medal in the 10,000-meter final on Saturday.

American Kyle Dake defeated Italy’s Frank Chamizo 5-0 for bronze. Chamizo was the No. 1 seed, and both are two-time world champions. Dake beat 2012 Olympic gold medalist Jordan Burroughs at the Olympic Trials to earn the spot on the team.

Steveson outscored his opponents 23-0 in the first three rounds. He rolled past 2016 Olympic gold medalist Taha Akgul 8-0 in the quarterfinals.

It was Japan’s third gold in women’s wrestling.

Jessie Fleming made Canada’s first kick in the shootout, but Ashley Lawrence, Vanessa Gillies and Adriana Leon all failed to convert.

Kosovare Asllani hit a post with Sweden’s first kick, and Nathalie Björn and Olivia Schough built a 2-1 Sweden lead. Anna Anvegard was saved by Canada goalkeeper Stephanie Labbe and with a chance to win the gold, Caroline Seger put her kick over the crossbar.

Deanne Rose tied the score for Canada, and Jonna Andersson’s sixth kick for Sweden was saved by Labbe, who dived to her left.

Stina Blacksteinius had put Sweden ahead in the 34th minute from Asllani’s cross. The shot by the 25-year-old striker appeared to deflect off Gillies and just past the outstretched right arm of Labbe.

Blacksteinius’ goal was her tournament-leading fifth and the seventh of her Olympic career, moving her one ahead of Lotta Schelin for the most in the Olympics for the fifth-ranked Swedes. Blacksteinius has 28 goals in 68 international appearances.

Fleming tied the score with a penalty kick in the 67th minute. Referee Anastasia Pustovoitova of Russia didn’t call for the penalty at first after Amanda Ilestedt slid into Fleming’s left foot but the decision was made after a video review.

This match was moved from Tokyo’s National Stadium to Yokohama’s Nissan Stadium and kickoff time pushed back 10 hours to 9 p.m. local time because of the oppressive heat. Even with the shift, it was 83 degrees at kickoff with 78% humidity. With fans barred because to the pandemic, the sound of boots kicking balls echoed around the 72,000-capacity venue, the site of Brazil’s 2-0 victory over Germany in the 2002 men’s World Cup final. 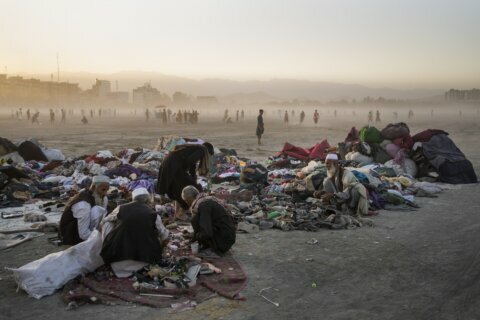