TOKYO (AP) — Her blue ribbon soared halfway to the rafters, and Israel’s Linoy Ashram spun and swirled and caught it, winning gold in a performance that ended Russia’s decades-long dominance in rhythmic gymnastics.

Ashram, 22, became the first Israeli woman to ever win an Olympic gold medal, edging out a pair of Russian identical twin sisters who were the favorites heading into Tokyo.

“This is history. I’m proud of represent Israel here, on the biggest stage in the world,” Ashram said after her victory. “It’s like a dream, I think it’s like I’m not here.”

Ashram, 22, has served as an Israeli military secretary since 2017, and she works there every day when she’s not performing. Israeli women are required to perform at least two years of military service, and she said it is important to her to give time and energy to her country.

In her final performance in the four-round competition, she danced to a techno remix of the Jewish celebratory folk song “Hava Nagila” as the crowd clapped along. Ashram, wearing a blue and white feathered bird leotard in the colors of the Israeli flag, missed a catch, and spectators gasped.

Dina Averina, who was set to perform just after Ashram, saw her mistake and was hopeful it was a chance for her to take the gold medal back to Russia.

Russia has swept the sports’ gold medals in every Olympics since 2000. Averina, a three-time world champion, said after the competition that she wasn’t expecting gold, but she’d been working hard to win it.

In the rhythmic gymnastics individual all-around competition, gymnasts perform with each of the sport’s four apparatuses — a hoop, a ball, a pair of clubs and a ribbon — tossing and catching them while dancing and spinning in leotards heavy with thousands of crystals.

Rhythmic gymnasts are judged on two criteria, the difficulty of their routines and how well they execute them.

The sport rewrote its code of points after the 2016 Games and removed the cap on the difficulty score. Now there is no ceiling for how many points a gymnast can get for the difficulty of their performance, compelling them to cram their routines with risky, high-scoring moves: long throws, spinning, leaping, passing balls and clubs behind their backs.

But to make room in their allotted 90 seconds, they had to cut something, and some of the performers said what they lost was room for the artistry and storytelling that has long been central in rhythmic gymnastics.

“With this new regulation it looks more like you’re juggling in a circus instead of expressing yourself in an artistic way,” said Italian gymnast Milena Baldassarri, who finished sixth. “It’s much more difficult and it’s fun to see, but with the old system you can transmit more of your feeling and inspire the audience much more than now.”

But both Ashram and Dina Averina said they believed the new scoring system helped them. Both performed intricate, complicated routines at head-spinning speed, running up wildly high difficulty scores.

Ashram took the lead from the very first round of competition, but Averina was just behind her, performing at one point to a remix of AC/DC’s “Thunderstruck.” Ashram went next, tossing and catching a set of neon yellow clubs to the beat of Beyonce’s “Crazy in Love.”

“I focused only on myself. I didn’t look at the routines of Dina and Arina,” Ashram said. “I worked so hard for this, so it’s worth it.”

In the end, Dina Averina finished her ribbon routine without any mistakes — while Ashram had dropped hers — and Averina said she hoped that would be enough to push her over the top. But it wasn’t.

When the scores appeared on the screen overhead, she dropped her head into her hands and tears welled in her eyes. Her sister had fallen into fourth place, and they sat down next to each other.

Arina, born 20 minutes before her twin, has described her sister as headstrong, and herself as more mild-mannered. They have said they have an extraordinary connection: They share a bedroom and even when apart, they wake up at the same time. They began training at 4 years old, after they’d taken to mimicking the Russian rhythmic gymnasts they saw on television.

Now 22, Dina Averina said she has back problems and she doesn’t think her health will allow her to stay in the sport another three years to make it to the next Olympics. But she’d like her sister to keep going, she said.

She felt sad for her when she fell off a place on the podium, she said. Fourth place is the most unfortunate spot to find yourself — close, but not close enough to have anything to take home with you.

The first thing she asked her sister was if she’d stick with gymnastics.

“Are you going to stay and fulfill your dream?” she said she asked her. “And she said no. But I think she said it because she was emotional at the moment.” 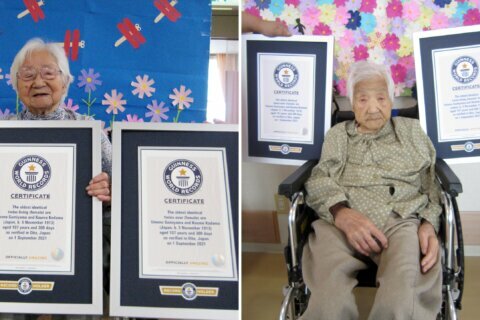