Coronavirus News: 'Is It Normal Yet' Podcast: A perfect storm | Who's getting coronavirus in Montgomery Co.? | Future of rapid testing | Latest cases in DC region
Home » Asia News » Indonesia Cabinet minister gets…

JAKARTA, Indonesia (AP) — Indonesia’s anti-graft court sentenced a former Cabinet minister to 12 years in prison on Monday after finding him guilty of bribery related to the government’s distribution of coronavirus aid.

Former Social Affairs Minister Juliari Peter Batubara was arrested in December after he turned himself in to the Corruption Eradication Commission, hours after its chairman publicly called on him to surrender.

His arrest came a day after the commission foiled an attempt to hand over seven suitcases and backpacks containing $1.3 million in cash to ministry officials. He was immediately dismissed by President Joko Widodo.

The case drew a public outcry as Indonesia struggles to combat corruption and tackle the profound health and economic impact of the coronavirus.

The corruption court ruled that Batubara was guilty of abusing his power by enriching himself and other officials. It also ordered him to pay a 500 million rupiah ($34,690) fine, and said he would be subject to another six months’ imprisonment if he fails to pay.

“The defendant has legally and convincingly been proven guilty of corruption,” presiding Judge Muhammad Damis said. “The crime was committed at a time of COVID-19 pandemic hardship,” he said in explaining why Batubara deserved the punishment.

Batubara, 49, a former politician with the governing Indonesian Democratic Party of Struggle, accepted the bribes through two subordinates in charge of procuring goods for the government’s social aid program, Adi Wahyono and Matheus Joko Santoso, a court document said.

It said the suppliers were asked to set aside 70 cents for each package of basic food distributed to the poor for Batubara’s benefit. They collected up to 32.3 billion rupiah ($2.2 million) on behalf of Batubara from 63 companies between May and December 2020, the court document said.

The project, supervised by the Social Affairs Ministry, is worth 5.9 trillion rupiah ($407 million).

Wahyono and Santoso are being tried separately at the same court.

Batubara was the second Cabinet member arrested for alleged graft in less than two weeks in December. Maritime Affairs and Fisheries Minister Edhy Prabowo, who has since resigned, was arrested on suspicion of taking bribes in connection with exports of lobster larvae and allegedly used the money for a luxury shopping spree in the United States.

Prabowo was sentenced to five years in prison last month.

The cases have tarnished President Widodo’s credibility in fighting corruption. Two other Cabinet ministers, including Batubara’s predecessor, were also given prison terms in corruption cases.

Widodo campaigned in part on a pledge to run a clean government in a country that ranked 102th out of 180 nations in the 2020 Corruption Perceptions Index compiled by Transparency International.

Indonesia has reported more than 3.9 million COVID-19 cases, including 126,372 deaths, the largest tally in Southeast Asia. 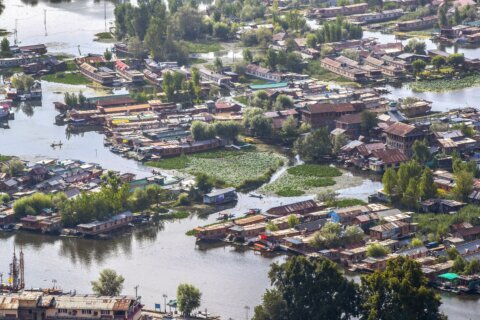