Coronavirus News: The nuance of dealing with COVID-19 | New cases in Montgomery Co. | 'Is It Normal Yet' Podcast: A perfect storm | Latest cases in DC region
Home » Asia News » Griner leads US to… 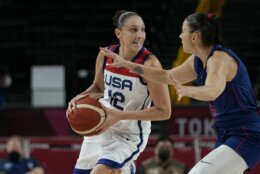 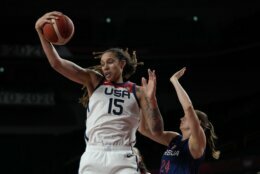 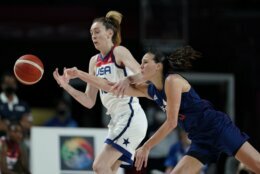 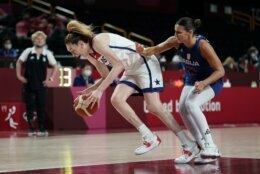 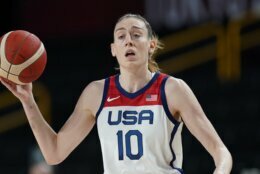 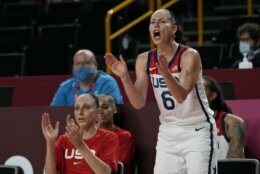 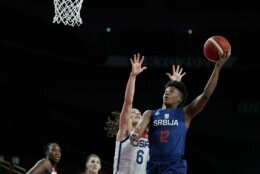 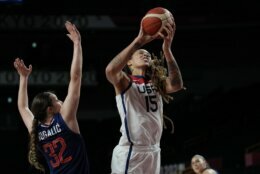 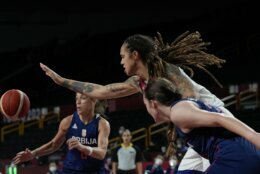 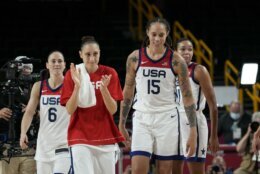 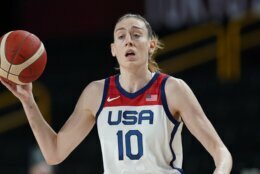 The U.S. already knows that drill.

Brittney Griner had 15 points and 12 rebounds to help the Americans beat the Serbians 79-59 on Friday to advance to title game.

“This is exactly where we want to be,” said Breanna Stewart, who also had a double-double with 12 points and 10 rebounds. “Everything is on the line. We’re going to do what we can to make sure we come home with a gold.”

The Americans are now one win away from a seventh consecutive gold medal which would match the U.S. men’s team that won seven Olympic titles in a row from 1936-68.

It would also give Sue Bird and Diana Taurasi five gold medals — the most ever by a basketball player in the Olympics. The Americans will face Japan on Sunday. The teams played in the preliminary round and the U.S. won 86-69. Japan beat France 87-71 in the semifinals, assuring the host nation its first medal ever in women’s basketball.

“I think everybody here wants to win gold for them, for us, for everybody that’s started this streak that got us here,” Griner said. “You know there’s a lot of different reasons why we want to win this gold medal. So I think you’re going to see some really good basketball in the gold medal game.”

The U.S. got a scare when Taurasi, grimacing and appearing to rub her left hip after collision, left the game midway through the third quarter. U.S. trainer Ed Ryan was talking with Taurasi when she went to the bench and she didn’t return. Taurasi missed the three exhibition games in Las Vegas with a hip pointer but appeared to moving without any issues during timeouts.

The U.S., which beat both France and Japan in pool play, has won 54 consecutive Olympic games now dating back to the semifinals of the 1992 Barcelona Games.

The Americans got off to another strong start for the second straight game. Trailing 4-3, they methodically went on a 20-4 run to take control with a berth in the gold medal game on the line. Griner had four points on one possession. She hit two free throws after a foul was upgraded to unsportsmanlike and then scored cutting to the basket on a pin-point pass from Stewart and the Americans led 25-12 after one.

Neither team could really get much going for the first few minutes of the second quarter as there were more missed shots and turnovers than points. Serbia cut the deficit to nine points behind Yvonne Anderson, who played at Texas and became a Serbian naturalized citizen last year to play in the Olympics. She finished with a team-high 15 points.

The U.S. scored the next nine points, a run started by A’ja Wilson’s three-point play and led 41-23 at the half. The lead ballooned to 23 points early in the third quarter before the Serbia reserves started pressing and cut the deficit to 14 late in the period. The Americans scored the final five points to put the game away.

Serbia rested its starters for most of the second half with the bronze medal game roughly 24 hours away. The country won the bronze in the 2016 Rio Games.

“When you have one last chance to get a medal, it’s definitely who will want it more, who will be more hungry,” Serbia coach Marina Maljkovic said.

Serbia didn’t get a chance to warm up until 25 minutes before the game because traffic delayed the team’s arrival and the NBC Spydercam that hovers above the court had a cable break about 40 minutes before tip.

“It definitely was untimely to have these issues,” said Anderson. “What can you do? We’re an hour away and hit traffic. We tried to come out and there were camera issues. In the end you have to take what you’re given. We already faced an uphill battle.”