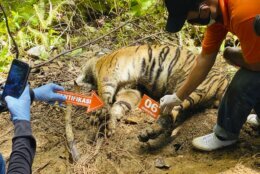 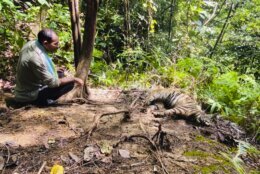 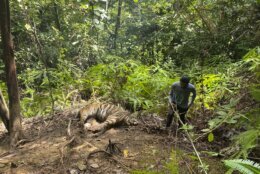 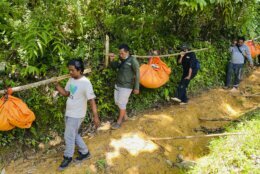 The mother and a female cub were found dead Tuesday in the Leuser Ecosystem Area, a forested region for tiger conservation in Aceh province, said Agus Arianto, head of the conservation agency. The body of a male cub was found on Thursday about 5 meters (15 feet) away, he said.

An examination determined they died from infected wounds caused by traps, Arianto said.

He said several traps similar to ones used to capture wild pigs on farms were found in the area of the bodies.

“Setting traps for pigs in a conservation area is very unlikely,” Arianto said, “This was intended to poach endangered animals for economic gain.” He said his agency will cooperate with law enforcement agencies in an investigation.

Sumatran tigers, the most critically endangered tiger subspecies, are under increasing pressure due to poaching as their jungle habitat shrinks, according to the IUCN Red List of Threatened Species. It estimated fewer than 400 Sumatran tigers remain in the wild.

It was the latest in a series of killings of endangered animals on Sumatra island. Conservationists have warned that the coronavirus pandemic has led to increased poaching as villagers turn to hunting for economic reasons.

Early last month, a female tiger was found dead with injuries caused by a snare trap in South Aceh district.

An elephant was found without a head on July 11 at a palm plantation in East Aceh. Police arrested an alleged poacher along with four people accused of buying ivory taken from the dead animal.

Aceh police also arrested four men in June for allegedly poaching a tiger with a snare trap and selling its remains for 100 million rupiah ($6,900). Days later, another Sumatran tiger died after it ate a goat laced with rat poison in neighboring North Sumatra province.

Liu wins Nebelhorn to give US 3rd entry for Beijing Olympics