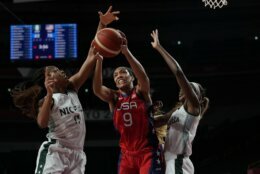 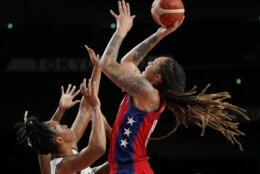 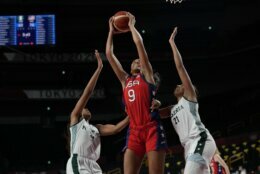 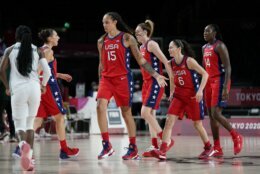 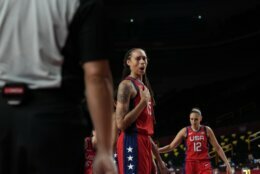 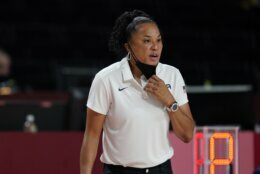 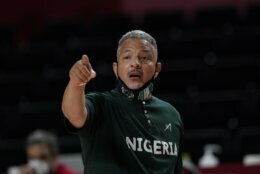 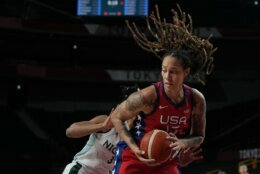 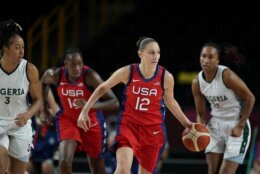 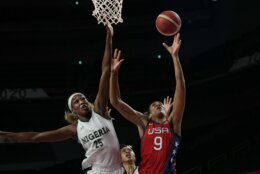 SAITAMA, Japan (AP) — The U.S. women won, as usual. It just wasn’t in the dominant fashion that the Americans are accustomed to.

The winning streak for the world’s top-ranked team is now 50 games and counting in Olympic competition. A’ja Wilson scored 19 points and grabbed 13 rebounds in her debut as the Americans beat Nigeria 81-72 on Tuesday in the opener for both teams.

It was the first time that a team had come within single digits of the U.S. since a four-point win over Russia in the semifinals of 2004 Athens Games.

Sue Bird has been a part of the past five Olympics and wasn’t too concerned by the final margin.

“You’re talking about some of the greatest Olympic teams of all-time,” she said of the previous ones that won by double-digits. “I don’t know how many teams would beat that Rio team, the London team or the Beijing team. This team is still figuring it out. We’ll get there.”

The U.S. came to Tokyo coming off two rare exhibition losses in Las Vegas earlier this month. The Americans also beat Nigeria by 31 points in that game.

Diana Taurasi, who was playing in her first game in nearly a month after suffering a hip injury, has competed in the last 33 of those victories to set a record for most games in the Olympics. She showed no ill-effects from the injury that sidelined her for the team’s three exhibition games in Las Vegas two weeks ago.

“It was a nice to get out there and compete a little bit with the group,” said Taurasi, who injured her hip in early July. “Yeah, I felt pretty good hopefully it keeps getting better day by day. As a group I think we did some good things today, some things we have to work on. I think overall it was a pretty good match by us.”

With a roster full of former U.S. college players, Nigeria wasn’t intimidated by the Americans. The African country jumped out to an 8-1 lead as the U.S. missed its first four shots and committed four turnovers. The Nigerians were up 20-17 after one quarter and extended the lead to 25-20 before the U.S. took over.

The Americans scored 23 straight points, the first four by Wilson — one of six newcomers on the U.S. roster.

“It felt good to get in the flow of things out there,” Wilson said. “I was definitely nervous, but then had that moment when I was like I’m supposed to be here.”

Breanna Stewart scored seven points during the game-changing burst. The U.S. led 44-32 at the half as Nigeria regrouped to score seven of the final eight points of the second quarter.

The U.S. extended the lead to 70-50 at the end of the third quarter on a buzzer-beating 3-pointer by Jewell Loyd. The Americans led 75-55 before Nigeria scored 12 straight points to cut it to eight with 3:19 left.

That’s as close as they would get,

“It’s a mix of disappointment but also encouragement for us because we wanted some rhythm, and I think we got it toward the end,” said Nigeria’s Adaora Elonu. “So if we can carry it on for the next game it’ll be good. But I think it’s good we got it under 10 because here in this tournament all points matter.”

The U.S. also holds the second longest Olympic win streak with 15 consecutive victories. … Turnovers plagued the Americans, who committed 12 in the first half and 25 for the game. … Joining Wilson as first-time Olympians were Loyd, Skylar Diggins, Ariel Atkins, Chelsea Gray and Napheesa Collier. … Bird recorded her 100th career assist in the game. She has 102 now and trails Teresa Edwards who holds the record with 143.

The U.S. team locked arms before the games during the playing of the national anthem, the same thing the team did during its three exhibition games in Las Vegas. During the WNBA season players usually leave the court to raise awareness for social justice before the anthem is played at games. Bird, who was a U.S. flag bearer at the opening ceremony, believes people know where she and her WNBA teammates stand on social justice issues.

The Nigerians had 18 more field goal attempts than the U.S. but made six less shots.

LOOKING FOR A WIN:

Nigeria was attempting to become the first African nation to win an Olympic contest in women’s basketball since 2004 when the team went 1-5 in Greece. No team from the continent has won a game since. There are hopes for that to potentially change: Nigeria went 3-4 at the World Champions in 2018, falling to the U.S. in the quarterfinals.

Shares gain as Evergrande says it will make interest payment