Seoul spy agency: No sign NKorean leader has been vaccinated

SEOUL, South Korea (AP) — There is no sign that North Korean leader Kim Jong Un has been inoculated against the coronavirus and his country hasn’t received any foreign vaccines, South Korea’s spy agency said Thursday.

The National Intelligence Service told lawmakers in a closed-door briefing that it hasn’t detected any information that North Korea has acquired vaccines, according to Ha Tae-keung, one of the legislators who attended the session. He quoted the NIS as saying there were no signs that Kim has been inoculated.

COVAX, the U.N.-backed program to ship COVID-19 vaccines worldwide, said in February that North Korea could receive 1.9 million doses in the first half of the year. But the shipment hasn’t been made, and there have been no reports that North Korea has tried to secure vaccines elsewhere for its 26 million people.

The NIS has a mixed record in reporting developments in North Korea, one of the world’s most secretive countries. Some non-government experts have speculated that Kim and his top deputies may have received vaccines imported through unofficial channels.

Another lawmaker, Kim Byung-kee, quoted the NIS as saying that North Korea’s government is trying to dispel any expectations among ordinary citizens that they will receive vaccines from abroad and is instead urging them to boost their anti-virus vigilance.

He said North Korea is building guard posts and concrete structures along its border with China to prevent illegal border crossings as part of its anti-virus steps. He said the lawmakers were told that North Korea isn’t even allowing the entry of diplomats from China, its main ally and aid benefactor.

Kim Jong Un recently berated top officials for “crucial” failures in coronavirus prevention that he said caused a “great crisis.” But his government continues to claim a perfect record in fending off the virus from its territory, an assertion that is widely questioned by outside experts.

The World Health Organization said last week that North Korea has reported to it that it has tested 31,794 people for the virus through June 24 and that all were negative.

Kim in recent speeches has called for the nation to brace for prolonged COVID-19 restrictions, indicating the country isn’t ready to reopen its borders despite the massive toll on its economy, which had already been devastated by years of mismanagement and U.S.-led sanctions over its nuclear program.

According to the NIS briefing, North Korea had planned to reopen its border with China in April but shelved the idea due to a shortage of disinfecting equipment, Ha said.

UNICEF, which procures and delivers vaccines on behalf of COVAX, said it remains unclear when vaccines could be delivered in North Korea, which has yet to complete its paperwork for receiving supplies from COVAX.

Kim has repeatedly urged the North Korean public to unite under his family’s leadership to build a self-reliant economy and withstand pandemic-related difficulties.

On Thursday, Kim paid respects at the mausoleum where the embalmed body of his grandfather, national founder Kim Il Sung, lies in state to mark the 27th anniversary of his death. As at other recent events, he and other top officials did not wear masks.

During the visit, Ri Pyong Chol, one of Kim’s closest associates who is considered a central figure in North Korea’s nuclear and missile programs, was standing in the third row, not in the front row along with Kim. This suggests Ri was dismissed from the Politburo’s powerful five-men Presidium leadership body. North Korean state media said recently that some unidentified top officials including a Presidium member had been dismissed.

Some experts say Kim aimed to shift public dissatisfaction over economic difficulties to those officials.

The NIS also told lawmakers that Kim doesn’t appear to have any health problem despite his recent weight loss. It said it has seen no intelligence that hospitals in charge of Kim’s health have imported medicines, and that Kim has recently presided over meetings for several hours and walked normally.

Recent North Korean photos show Kim looking much thinner, sparking speculation that he might have health issues. The NIS said it believes Kim went on a diet to improve his health and lost 10-20 kilograms (22-44 pounds) between February and June. 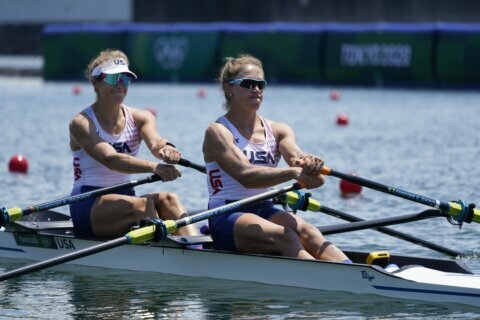