Plenty at stake for NBC as COVID Olympics opening looms

NEW YORK (AP) — If all goes well for NBC Universal over the next several weeks, Americans will be buzzing about the Olympic performances of Simone Biles, Gabby Thomas, Kevin Durant or some unexpected star.

The year-delayed Tokyo Olympics officially opens with NBC’s telecast of the opening ceremony on July 23 — live in the morning and with an edited version in prime time.

The Olympics arrive dripping in bad vibes, amid a COVID-19 state of emergency in Japan. The majority of Japanese citizens are unvaccinated against the virus and most wish the Olympics weren’t taking place this summer. Most events will occur in near-empty venues. Star sprinter Sha’Carri Richardson was kicked off the U.S. team after a positive marijuana test, and the U.S. men’s basketball team suffered embarrassing exhibition losses to Nigeria and Australia.

Yet once the competition begins, NBC is banking on a COVID-weary United States to embrace the Games.

“I really believe that people are craving a shared experience after all we’ve been through,” said Molly Solomon, executive producer of NBC’s Olympics coverage.

If you miss anything, it won’t be NBC’s fault. More than 7,000 hours of Olympics coverage will be offered, on NBC, cable outlets like USA and NBCSN, on NBCOlympics.com and the Peacock streaming service, on Twitch, Twitter and Snap.

The length of COVID’s shadow is difficult to predict.

While the International Olympic Committee gave the go-ahead for the Games, it’s hard to fathom that NBC Universal, which is paying $7.75 billion to broadcast the Olympics between 2022 and 2032, didn’t make its voice heard. Mike Wise didn’t exempt NBC when he called it “one of the most brazen, hubris-over-humanity cash grabs in modern history” in a Washington Post column this week.

Asked about the issue, Solomon said, “if there’s an Olympic Games that’s happening, as the American broadcaster, we’re going to be here to chronicle the stories of the games.”

NBC News anchor Lester Holt will report during the opening ceremonies about the COVID-19 concerns and restrictions placed on participants.

“You would hope that (NBC) would be willing to, as much as it is feasible, step out of the Olympics bubble and talk to everyday people in Japan to hear their thoughts,” said Jules Boykoff, a Pacific University professor and author of “Power Games: A Political History of the Olympics,” who has been critical of the decision to proceed with the games.

How much Holt will be needed after opening night is anybody’s guess. Only a determined optimist would believe that no athlete will catch the virus or be exposed. The question is whether it will happen often enough to wreak havoc on the schedule.

NBC tends to handle news at the Olympics in perfunctory fashion and keep the focus on sports. There’s also a history of pre-games concerns melting away once competition begins. Remember the Zika virus? Worries about terrorism in London?

A recent survey suggested there’s not a great deal of public interest leading into the games. COVID restrictions will also mean fewer reporters will be there to cover the events, eliminating some avenues of attention, said John Affleck, professor of sports journalism and society at Penn State University.

NBC considers anticipation levels relatively meaningless before Olympians get into the starting blocks. Andy Billings, director of the sports communications program at the University of Alabama, said he sees positive signs for NBC in the attention paid to televised Olympic team trials.

The lack of a live audience is one issue NBC is working hard to counteract.

The company said it would not pipe in fake crowd noise. That’s a technicality, since the Olympic Broadcasting Service, which provides the video and audio feeds of events that NBC will use, is working to “create … an atmosphere for the athletes so they’re not competing without any crowd murmur or presence,” Solomon said.

NBC is looking to amplify the sounds of competition — the splash of the pool, the interplay between coach and athlete — to give viewers the feel of being there, she said.

Without the broadcast staple of a cutaway to nervous parents in the stands, NBC will try to recreate that by showing viewing parties back in the United States.

NBC’s prime-time coverage will almost exclusively be devoted to swimming and diving, track and field, gymnastics and beach volleyball, as it has in the past. There will be some exceptions, like gold medal games in men’s and women’s basketball.

That lack of variety is less a point of contention than it used to be, since there are other outlets for competition. The time difference — Tokyo is 13 hours ahead of the Eastern United States, 16 hours ahead of the West — means limited opportunity for live coverage in the evening.

All of the consumer options give NBC Universal other ways to make money; NBC prime-time ratings will be the biggest factor, but no longer the sole determinant, of financial success or failure.

NBC Universal announced just before the pandemic shutdown in March 2020 that it had sold a record $1.25 billion in advertising time for the games, then scheduled for four months later. With the games rescheduled, NBC Universal has not publicly updated that figure. The company has said that it expects to exceed advertising sales from the last Summer Games, in 2016, with more advertisers than any previous Olympics.

“If they break even, that is a great success,” Alabama’s Billings said. “If you can simply not lose money and have a massive number of new subscriptions for Peacock, from people checking that out, that’s an incredible promotion for what they probably see as the future of television.”

Peacock is the new wrinkle this year. The service, looking to compete in a streaming world dominated by Netflix and Disney, claims 42 million subscribers. Customers can get it for free, or there are $5 and $10 options with fewer ads and more content.

It is experimenting with Olympics content, much of it highlight-based, although it will offer some events streamed live or later on demand. The $5 option opens access to live U.S. basketball games. The NBCOlympics.com website remains the place for customers to access the most content.

The first U.S. competition predates the opening ceremony: a softball game against Italy that will be broadcast on NBCSN on Tuesday night.

As he prepared to head for Japan this weekend, NBC commentator Ato Boldon, a former track and field Olympian, said he felt no anxiety despite the COVID-19 state of emergency.

“I know this is not going to be a typical Olympic Games,” he said. “But I still feel it has its purpose in not just the sporting landscape this year, but in the human landscape.” 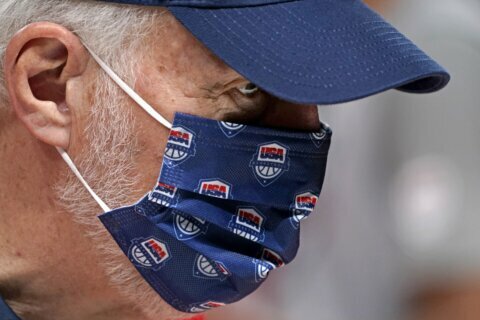