BANGKOK (AP) — A week into an ambitious but risky plan to open the Thai resort island of Phuket to vaccinated visitors, signs were encouraging that the gambit to resuscitate the decimated tourism industry was working, even as infections elsewhere in the country surged Thursday to record highs.

After seeing fewer than 5,000 foreign travelers over the first five months of the year, the island off Thailand’s southwest coast, whose economy is 95% reliant on the tourist industry, welcomed 2,399 visitors during the first week of July.

The so-called Phuket sandbox plan relies on a strategy of vaccinations, testing and restrictions — measures that officials are hoping are strict enough to mitigate any COVID-19 threat, while still providing enough freedom for tourists to enjoy a beach vacation.

In the week before the sandbox started on July 1, Phuket saw 17 new cases of the coronavirus. The numbers climbed the first week, but remained low at 27 new cases.

At the same time, Thailand as a whole has seen a spike in infections, with a record 7,058 cases reported Thursday with 75 deaths, which has made many skeptical about pursuing the Phuket reopening at this time.

Prime Minister Prayuth Chan-ocha has come under personal fire for his handling of the surge, and political cartoons have depicted him sitting on the beach enjoying himself while Thais die from the virus.

Prayuth was also forced to self-isolate this week after a businessman he had contact with at the sandbox launch tested positive for COVID-19.

Last-minute issues with the program meant some cancelations before it even began, and the initial target of 30,000 visitors for July was reduced to 18,000. Bhummikitti Ruktaengam, president of Phuket Tourism Association, said now that the program is up and running he expects 30,000 visitors from outside Thailand in August.

There’s still a lot of ground to make up to get back to the 2 million foreigners Phuket saw in the first five months of last year as the pandemic was beginning.

“The COVID-19 situation might affect the overall picture of the country, but I believe that the visitors will understand that Phuket is safe enough for them so it should not affect their travel plans,” he said.

Liron Or, a tourist from Israel, decided on a 10-day trip to Phuket with her husband and five children when she first heard about the sandbox plan three weeks ago.

They arrived on day one and she said the opportunity to relax on holiday has outweighed any of the mandated precautions.

“The process is not too difficult,” she said. “And this trip gives our children such big joy. There are not too many tourists here at the moment on the beaches.”

Travelers arriving elsewhere in Thailand are subject to a strict 14-day hotel room quarantine, but under the sandbox plan, visitors to Phuket can roam the entire island — the country’s largest — where they can lounge on beaches, jet ski and eat out in restaurants.

Visitors are only permitted from countries considered no higher than “medium” risk. Most so far have come from the U.S., Britain, Germany, the United Arab Emirates and Israel.

Adult foreign visitors must provide proof of full vaccination, a negative COVID-19 test no more than 72 hours before departure, and proof of insurance that covers virus treatment, among other things. Once on the island, they have to follow mask and distancing regulations and take three COVID-19 tests at their own expense — about $300 total — and show negative results.

After 14 days, visitors can travel elsewhere in Thailand without further restrictions.

Ahead of the program’s launch, some 70% of the island’s approximately 450,000 residents received at least one vaccine dose, and all front-line workers in restaurants, hotels and elsewhere were fully vaccinated.

So far, only one visitor has tested positive for the coronavirus; a man from the UAE who was taken to a hospital for treatment.

Angela Luxy Smith, a Briton who works in Qatar and had been a regular visitor to Thailand in the past, leapt at the chance to return.

She and her husband plan to take full advantage of the program, staying in Phuket for the initial 14 days and then traveling to other places in Thailand, before returning to Phuket for another week to wrap up a 40-day holiday.

She and her husband were amazed at how many restaurants were open in some areas that cater more to residents, but said much remains closed at beaches more popular with tourists.

“It’s so strange, quiet and closed — so sad for many people who rely on tourism,” she said. “We hope people come back very soon.”

Before the pandemic, some 20% of Thailand’s economy was related to the tourism industry and other areas in the country are closely watching the Phuket experiment as they look to gradually reopen themselves.

For Richard Van Driel Vis, his trip that began this week in Phuket was the first time he’d left the Netherlands since the pandemic started.

He said getting together the documentation and fulfilling the prerequisites for the trip was “difficult and stressful” but in the end, “totally worth it.”

“I am sitting here in the bar looking at the beach, in a nice warm weather,” he said.

“It’s Phuket or stay home so I came here,” he said wryly. 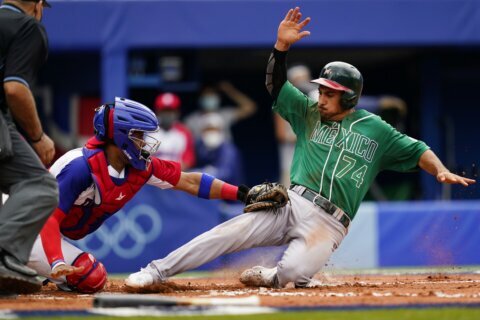