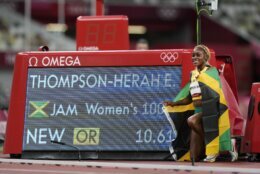 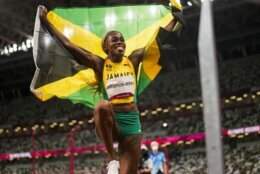 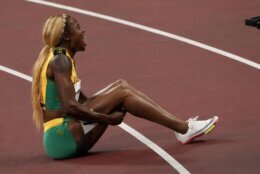 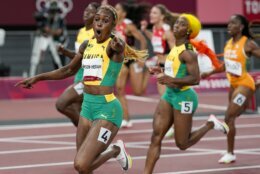 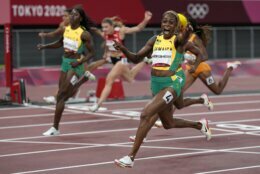 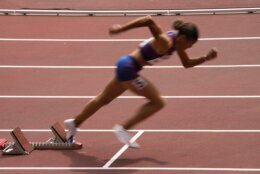 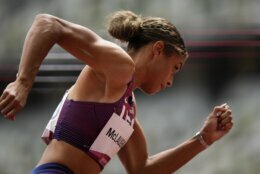 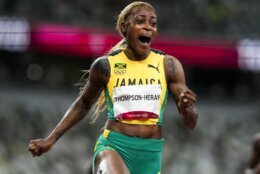 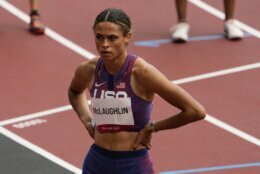 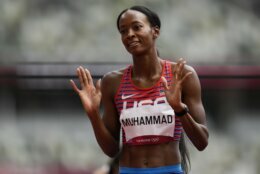 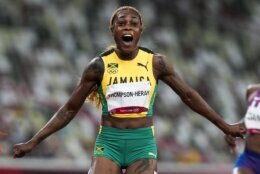 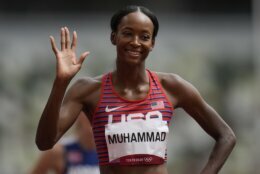 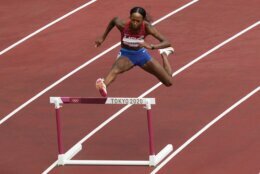 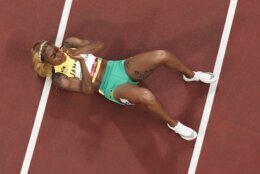 TOKYO (AP) — Streaking down the track, with only six steps to go until she reached the finish line, Elaine Thompson-Herah stuck out her left arm and started pointing at the clock.

She knew she had the win.

It was only a matter of what else would come with it.

With a time of 10.61 seconds, the latest in the long string of Jamaican speed stars defended her Olympic title in the 100 meters Saturday. She broke a 33-year-old Olympic record held by none other than Florence Griffith Joyner. And, as a more-than-fitting bonus, she revisited a debate first triggered by the fastest Jamaican of all — Usain Bolt.

Yes, the gold medal and Flo Jo’s venerable record were great. But the question could not be avoided: Just as people wondered what Bolt might have given up when he hotdogged his way to the finish line in his first Olympic victory in 2008, how much faster might Thompson-Herah have gone had she run hard for 100 meters, not just 90 or 95?

“I think I could have gone faster if I wasn’t pointing and celebrating, really,” she said. “But to show you that there’s more in store. Hopefully, one day I can unleash that time.”

As it was, she finished the night as the second-fastest woman in history. Flo Jo’s world record of 10.49 is only mark left to beat.

As it was, she beat a two-time Olympic champion, Shelly-Ann Fraser-Pryce, and joined bronze medalist Shericka Jackson in the first Jamaican podium sweep at the Olympics since 2008.

“The legacy we have in Jamaica is incredible,” Fraser-Pryce said.

Yet, with all that swirling around, it felt more than fitting that Thompson-Herah was drawing comparisons to Bolt, who redefined the sprint game with his antics, to say nothing of his speed, and left a hole in track and field after he left the Olympic scene in 2016 with nine victories in nine sprints.

In the first win, the 6-foot-5 speedster was well clear of the field in Beijing when he brought his hands out to his sides and started his celebration before he reached the finish line. His time, 9.69, was a world record. But the world went crazy — even then-IOC President Jacques Rogge leveled a sharp critique of the move — wondering what might have been had Bolt busted it through the line.

He answered the question a year later when he lowered the mark to 9.58 at the world championships in Berlin.

Thompson-Herah thinks she’ll get another chance like that, too.

On a sultry night in the near-empty Olympic Stadium in Tokyo, Thompson-Herah started pulling away from her top rival, Fraser-Pryce, early. By the 50-meter mark, it was a runaway. She won by .13 seconds, or about three body lengths, a veritable rout in a 100-meter final.

Jackson, a bronze medalist five years ago at 400 meters who moved to the shorter sprints for the Tokyo Olympics, took bronze in this one, as well, in 10.76.

Flo Jo’s old mark of 10.62 came at the 1988 Seoul Olympics, not long after she ran the 10.49 on a breezy day in Indianapolis. For decades, debate has raged about whether the marks are legit, and the longer they held up, the more amazing the records seem.

No Olympic champion had even broken 10.7 since Flo Jo back in the day. Thompson-Herah insisted she wasn’t sure she would either as she approached the finish. But, she said, “I knew that I won.”

“The pointing, I don’t know what it means. To show that I was clear,” she said.

Thompson-Herah is now firmly entrenched in a long list of Jamaican women track stars — a string some say is even more impressive than the men’s. The Caribbean island was putting greats such as Merlene Ottey and Veronica Campbell-Brown out there long before Fraser-Pryce moved to center stage as a brace-faced 21-year-old in Beijing.

But she looked a bit stunned to finish that far behind her main rival on a track that has produced fast times over the first two days of competition.

After seeing Thompson-Herah hotdog it to the finish, the woman they call “Mommy Rocket” — she has a 3-year-old son, Zyon — stared, stone-faced, at the scoreboard and stood on the track with her hands on her hips.

She had been the favorite coming in, largely on the strength of a 10.63 she ran in June that showed she remained in top form some two years after winning the world championship title in 2019.

“Of course you’re disappointed,” said Fraser-Pryce, whose title in Doha was a comeback story, only two years removed from her pregnancy. “The only aim an athlete lines up for is to win.”

Not even the defending Olympic champion saw this coming. While Fraser-Pryce was at peak form, Thompson-Herah was something less, battling an Achilles injury that slowed her all the way through Jamaica’s national championships last month.

“Two months ago, probably a month and a half, I didn’t think I’d be here today,” Thompson-Herah said. “I held my composure. I believed in myself.”

Even without American Sha’Carri Richardson, at home because of a doping positive for smoking marijuana at the U.S. Olympic trials, the women’s 100 shaped up as potentially the best race of the Olympics, ahead of the Bolt-less men’s sprint.

As if to accentuate that point, the favorite in the men’s race, American sprinter Trayvon Bromell, finished fourth in his qualifying heat earlier in the evening and had to wait nearly an hour to see if he’d get one of three wild-card spots into Sunday’s semifinal round.

He did, and said, “Honestly, I have no words for it,” when asked to explain the lackluster run.

Another surprise came in the Olympic debut of the mixed 4×400 relay, where Poland won the gold and Alexander Ogando of the Dominican Republic sprawled over the line to edge the Americans for second.

The evening’s other medal event was men’s discus, where Daniel Stahl and Simon Pettersson led a 1-2 Swedish finish. The Swedes draped flags over their shoulders and jogged on the grass down the backstretch during a celebration in front of the empty stands.

Not long after, the real running began, and Thompson-Herah found herself in a spot she was familiar with — first at the Olympics — but with a time no woman had ever seen on this stage: 10.61.

Next is the 200, where Thompson-Herah is also the defending champion. It’s not hard to imagine her walking out of the Olympics the same way Bolt always did — with three gold medals, a few unanswered questions and leaving track fans wanting more.

Japan jumps, rest of Asia down, on China and virus concerns