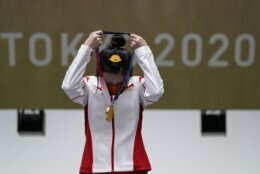 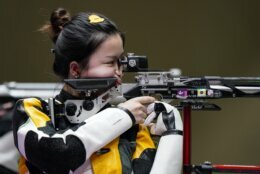 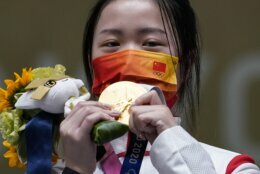 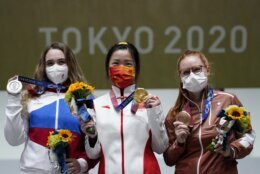 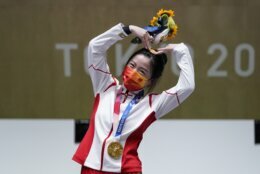 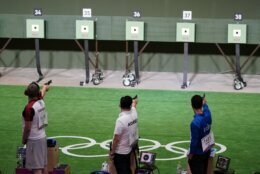 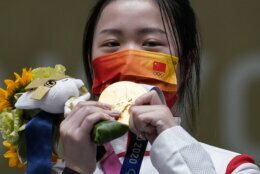 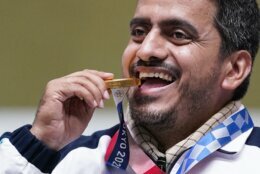 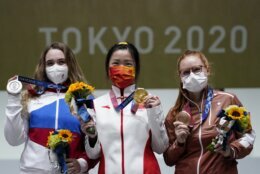 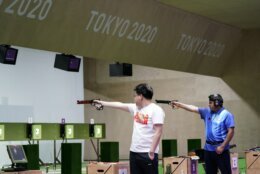 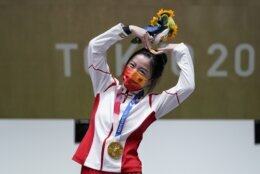 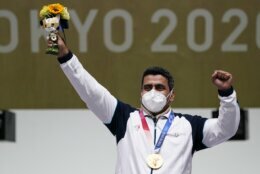 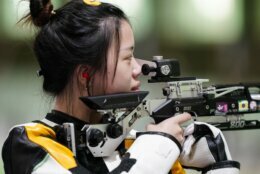 TOKYO (AP) — Javad Foroughi spent his nights caring for gravely ill patients, doing everything he could to help them breathe. Many didn’t make it.

Foroughi contracted COVID-19 himself, recovered and feared he would catch it again while doing his job.

Amid all the horrors and difficulties, the shooter never let his goal blur from focus.

Now the Iranian nurse is an Olympic champion.

Unshaken in his first Games, Foroughi became Iran’s oldest medalist and set a record in the process, earning gold in the men’s 10-meter air pistol Saturday at the Tokyo Olympics.

“I’m very happy I did my job on both sides,” Foroughi said through an interpreter. “As a nurse, we battled COVID and it was very hard. As a shooter, I worked a lot the last two years for this moment.”

On the women’s side, Yang Qian won the first gold medal of the Games, setting an Olympic record in 10-meter air rifle with 251.8 points despite a shaky final shot.

The 41-year-old Foroughi surpasses Iranian weightlifter Mahmoud Namdjou, who was 38 when he got bronze at the 1956 Melbourne Games.

The journey to the top step of the Olympic podium was an unlikely one.

Born with a defect that made his heart pump too hard, Foroughi was unable to participate in most sports growing up. Even shooting, which requires slowing the heart rate and steadying the nerves, was not an option.

Once he got his heart condition under control, he became hooked on shooting, learning to fire a pistol in the hospital basement. He trained after finishing his night shifts and turned himself into an elite shooter.

Forough contracted COVID-19 early in the pandemic and was unable to train for a month. Shutdowns left him nowhere to shoot once he recovered, so he worked on body and mind training. He eventually was able to train and compete online with other shooters, honing his craft so he would be ready when in-person competitions resumed.

Foroughi won two World Cups earlier this year and arrived at Tokyo ranked fourth in the world. He qualified fifth and immediately jumped to the lead in the finals with a series of shots in the 10-ring. He led Mikec by 4.2 points entering the final two shots and celebrated the gold medal by waving his towel before kneeling on it to pray.

Mikec joined in, wrapping up Foroughi in a bear hug and lifting him off the ground.

“I’m very happy that I received some success,” Foroughi said.

After lifting Foroughi, he went over to Serbian compatriots at the edge of the stands and began hugging them after earning silver in his first Olympic appearance.

Not exactly in line with coronavirus safety protocols, but a needed released after going through his own struggles, including a 10-day stint in the hospital with COVID-19.

“You’re not supposed to do that, but the emotions were stronger than anything else,” Mikec said.

Yang had a few emotions of her own after a close call and her worst shot of the finals.

Within 0.2 points of Russian Anastasiia Galashina, Yang missed the center ring on her final shot, a 9.8 that seemingly knocked her off the top step of the podium.

But as she was shooting, Galashina had a miscue of her own, hitting an 8.9 on her final shot as the limited crowd at Asaka Shooting Range let out a gasp.

“It’s unbelievable that I can be here,” Yang said through an interpreter. “I was really nervous. The competition was really tight, but I’m so happy that I could win.”

Yang, who qualified sixth, had been consistent throughout the finals, repeatedly hitting near the center of the 10 circle. She entered the final two shots just behind Galashina and figured the gold was gone with the 9.8.

Disappointed with her final shot, Yang looked up to see Galashina missed on her chance and the two center rings. The Russian’s 8.9 meant IOC President Thomas Bach would present Yang the gold medal on a tray — per pandemic protocols — instead of Galashina.

“I got too nervous, held on too long,” said Galashina, who finished with 251.1 points. “My thoughts were not in the right place. I lost concentration. The explanation is very simple.”