Asian shares higher, but China down after tough talk from Xi

TOKYO (AP) — Shares were mostly higher in Asia on Friday, though markets in Shanghai and Hong Kong declined a day after the Chinese Communist Party marked its centenary with tough talk by Chinese President Xi Jinping.

On Wall Street on Thursday, the benchmark S&P 500 touched a new record in anticipation of a positive U.S. jobs report, expected later Friday. Recent data have provided encouraging signs of a steady recovery from the pandemic.

In a speech Thursday, Xi warned that anyone who tries to bully China “will face broken heads and bloodshed.”

Xi appeared to be hitting back at the U.S. and others that have criticized China’s trade and technology polices, military expansion and human rights record. The harsh rhetoric also appeared aimed at a domestic audience. But coming at a time of sharp tension with Washington, it struck an ominous tone.

Fitch Solutions forecast in a report that Japan’s economy will start to recover as growing numbers of people are vaccinated for COVID-19. Japan’s vaccine rollout pace is about the same as the rest of Asia’s, with about 10% of the population fully vaccinated. That lags the U.S. and much of Europe.

”We do note that the economic impact of the Covid-19 pandemic did create a significantly low base from which to grow from,” Fitch said.

“The recovery in retail sales and consumer confidence will rely on the ability of the government to vaccinate enough of the population, so as to allow for the gradual easing of restrictions.”

Investors have been encouraged by data that show the economy continues its recovery from the pandemic. The latest weekly unemployment report showed the lowest number of claims for jobless aid since the pandemic walloped the economy. The highly anticipated jobs report for June comes out Friday.

“Investors are eager to see whether or not the labor market continues to recover as quickly as expected,” said Charlie Ripley, senior investment strategist for Allianz Investment Management.

Employment has been one of the shakier areas of the economic recovery, lagging other measures such as consumer confidence and retail sales. Economists and analysts have said that a much fuller and more stable recovery depends on more people going back to work.

The June jobs report is also being closely watched as a potential gauge for when the Federal Reserve might start easing its bond purchases and other measures that have kept interest rates low. Inflation fears have somewhat subsided, but investors are still trying to figure out whether rising inflation will be temporary or more long-lasting.

Investors will look to see if wages kept rising, which could add to inflation.

Oil prices jumped as OPEC met. The group of oil-producing countries is considering whether to increase production as the global economy recovers from the pandemic. Prices of oil and other raw materials have risen steadily this year as demand has increased. Oil gained 2.4% Thursday and is up 55% so far this year.

“Crude oil has really been the story of the day,” said J.J. Kinahan, chief strategist with TD Ameritrade. “Crude oil, because almost everybody is going to use gasoline directly to drive somewhere, that’s going to hit people’s pocket books a lot quicker and has a lot bigger effect.”

Higher oil prices translated into higher energy company stocks. Occidental Petroleum rose 5.1%, ConocoPhillips gained 3.3% and Marathon Oil added 4%. The energy sector of the S&P 500 was the biggest winner in the first half of the year with a gain of over 40%. 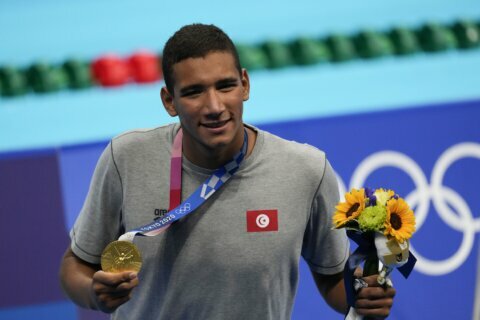