US envoy: Children in conflict taught to commit war crimes

UNITED NATIONS (AP) — Children caught in conflict are being taught to commit war crimes before they can count, the U.S. ambassador to the United Nations said Monday, pointing to the deadliest attack in Burkina Faso in years, with more than 130 civilians killed by an armed group comprising “mostly 12- to 14-year-olds.”

During nearly four decades as an American diplomat, Thomas-Greenfield said, she met many victims of conflict, and the children “break your heart the most.”

“Children will tell you stories that no child should be able to recount: Of being conscripted at gunpoint. Of being raped. Of being forced to murder their own siblings, their own parents,” she said. “These children are often no taller than the guns they actually carry.”

Thomas-Greenfield also pointed to the recent horrific attack on a school in Afghanistan that killed at least 90 girls, and the regular attacks on schools in northern Nigeria where “children are abducted for ransom.”

Twenty five years after the U.N. started focusing on children in conflict, “we have not done enough,” she said.

U.N. Secretary-General Antonio Guterres told the Security Council that “the disregard for children’s rights at times of conflict and upheaval is shocking and heartbreaking.”

During 2020, almost 24,000 grave violations such as recruitment and rape were committed against 19,300 children in 21 conflicts, and the COVID-19 pandemic made it difficult for experts to reach them, the U.N. chief said in a recent report.

More than 8,400 youngsters were killed or injured in the wars in Afghanistan, Syria, Yemen and Somalia, while nearly 7,000 more were recruited and used in fighting, mainly in Congo, Somalia, Syria and Myanmar, according to the report.

It also said rape and other forms of sexual violence shot up 70% last year and abductions soared 90%. Attacks on schools and hospitals “remained excessively high,” it said.

“I call on all parties to conflict to prioritize the prevention of violations against children and to engage in dialogue, cease-fires and peace processes,” Guterres told the council in a video briefing.

Henrietta Fore, the head of the U.N. children’s agency, said the report shows the world’s increased understanding of the devastating impact of conflicts on children. “But,” she added, “it also shows how little progress the world has made in protecting children from the scourge of war” since the first U.N. report 25 years ago by Graca Machel, a campaigner for the rights of women and girls and wife of the late South African President Nelson Mandela.

Fore said conflicts are longer, increasingly complex, and devastate the futures of children who bear no responsibility for the fighting but suffer “the deepest scars” and “pay the highest price.”

“On average, over the last five years, the U.N. has verified at least 70 children every day who experienced grave rights violations,” Fore said.

The secretary-general’s report said girls were not only the victims of one-quarter of all violations — “they represented 98% of the victims of rape and sexual violence,” she said.

The council meeting was chaired by Estonian President Kersti Kaljulaid, who singled out serious consequences for children of the war in Yemen, the killing of children by Myanmar’s military junta and the killing of more than 150 children and injury to 400 in Afghanistan in the first three months of the year as well as damage to numerous schools preventing thousands of students from returning to classes.

Guterres later Monday appointed Kaljulaid to a new position as global advocate for Every Woman Every Child, a U.N. campaign to promote access to health care for women, children and adolescents.

The Estonian president called this among “the biggest challenges we are facing in the following decades,” saying COVID-19 exacerbated inequities and severely disrupted health care disproportionately affecting the most vulnerable women and children. 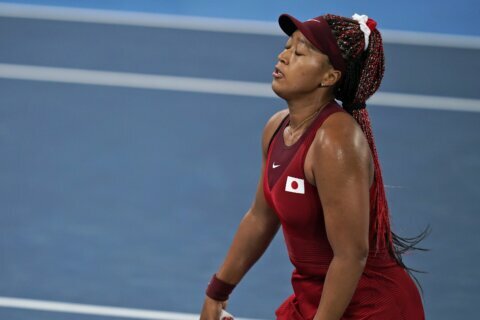 ‘A bit much’: Naomi Osaka cites pressure in Olympic loss

Global markets sink ahead of Fed update on economy