GENEVA (AP) — Russian former world champion hurdler Sergei Shubenkov was cleared on Tuesday in a doping case he explained was caused by his baby son’s medication.

The judges at Shubenkov’s hearing described the case as “genuinely exceptional,” said track and field’s Athletics Integrity Unit which prosecuted it in secret ahead of the Tokyo Olympics.

The 2015 world champion in 110 meters hurdles tested positive for “a low concentration” of a diuretic called acetazolamide in December.

Shubenkov cited a medication that was being taken by his son, who was then aged three months, in a post on his Instagram page after the verdict was announced.

“A child at this age cannot swallow, so the pills must have been prepared in a certain way,” he wrote in Russian and English. “That resulted in tiny almost invisible particles of powder being at my kitchen that have caused a positive test.”

The AIU said in a statement it made “a thorough investigation of the athlete’s explanation,” that related to “unintentional ingestion of residue from medication being used to treat a family member,”

The three judges at an independent tribunal “found that it was a ‘genuinely exceptional’ case, accepted the athlete’s plea of no fault or negligence, and rejected the AIU’s request that a period of ineligibility be imposed,” the AIU said.

The verdict can be challenged at the Court of Arbitration for Sport by the Monaco-based AIU or the World Anti-Doping Agency.

“Luckily, it ended up nicely,” Shubenkov wrote. “I’m glad and thankful to AIU and WA (World Athletics) that they have managed to review and resolve this case properly.”

Confidentiality surrounding the case was possible because of the category of banned substance and the fact Shubenkov was not suspended pending the verdict, the AIU said.

It is unclear if Shubenkov will be selected in the Russia team for Tokyo which is limited to 10 athletes in fallout from the long-running national doping scandal. He could not compete at the 2016 Rio de Janeiro Olympics.

The 30-year-old runner took silver medals in the 110 hurdles at the past two world championships and bronze in 2013 in Moscow.

Shubenkov was cleared in March by World Athletics to compete this season at international events as an “authorized neutral athlete.”

The “ANA” status is granted as an exemption for Russian athletes whose drug-testing record passes vetting to compete while their national athletics federation is suspended.

Olympics Latest: Another US team ousted in beach volleyball 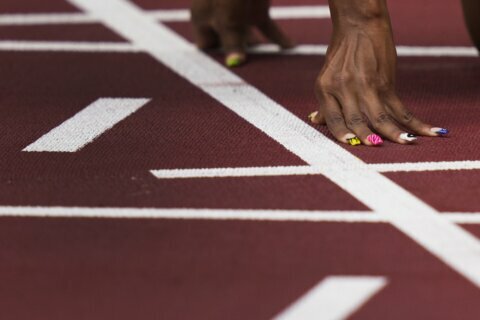