For years, Hong Kong was the only place in China where people were allowed to mark the anniversary of Beijing’s crushing of the Chinese democracy movement.

Despite the commemoration being banned for the first time last year, thousands of protesters defied authorities and proceeded to Victoria Park to light candles and sing songs. Police who were present at the vigil warned the protesters they may be breaking the law but made no arrests on the day itself.

Wong and three district councilors had pleaded guilty to knowingly taking part in an unauthorized assembly, and could have faced a maximum of five years in prison. Twenty other people face charges over the Tiananmen vigil but have not entered pleas.

Wong, who rose to prominence as a student activist and was the face of the 2014 pro-democracy protests, is already in jail after being convicted of illegal assembly in other protests and was sentenced to an additional 10 months. Councilors Lester Shum, Jannelle Leung and Tiffany Yuen received sentences that range from four to six months for the Tiananmen vigil.

Wong was also among the 47 activists charged under the city’s sweeping national security law for taking part in unofficial primary elections held last year by the pro-democracy camp to determine candidates to field in the legislative elections, which were later postponed.

Authorities have launched an intense crackdown on dissent in Hong Kong following months of anti-government protests in 2019. In addition to the new national security law, the criteria for elections has been changed and many outspoken democracy advocates have been jailed.

The Basic Law is Hong Kong’s mini-constitution and promises civic freedoms not allowed on the mainland. Democracy activists say those freedoms have been all but erased in the recent crackdown.

Chow urged Hong Kong people and others around the world to continue remembering the Tiananmen crackdown by lighting a candle on June 4, wherever they are.

On the night of June 3-4, 1989, Chinese military tanks and troops moved into Beijing’s Tiananmen Square to break up weeks of student-led protests that had spread to other cities and were seen as a threat to Communist Party rule. Hundreds and possibly thousands of people were killed.

US stocks dip from records ahead of Fed decision on rates 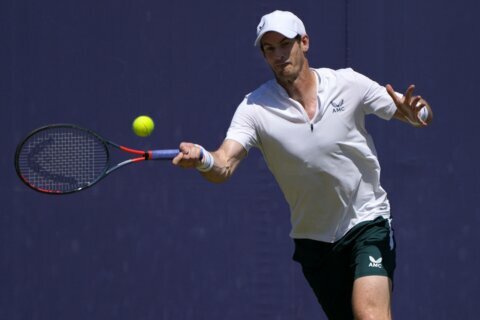 Murray in tears after beating Paire 6-3, 6-2 at Queen’s Club