WASHINGTON (AP) — The White House says that the intelligence community does not have conclusive evidence that Russian intelligence operatives encouraged the Taliban to attack American troops in Afghanistan.

The assessment, revealed Thursday as the U.S. announced a host of new sanctions on the Russian government, undermines one of the sharpest attacks Joe Biden and other Democrats leveled against former President Donald Trump during the 2020 White House race. Biden repeatedly attacked Trump on the campaign trail for not standing up to Russian President Vladimir Putin despite his administration being aware of intelligence suggesting Russian agents were offering bounties to the Taliban.

But on Thursday, White House press secretary Jen Psaki said that after a review of those classified reports, the intelligence community determined it had only “low to moderate confidence” in their authenticity. She said that was due in part to the ways in which the intelligence was obtained, including from interrogations of Afghan detainees.

In June, The Associated Press reported that Trump White House officials were briefed on intelligence about potential bounties in 2019 and again in 2020. Then-national security adviser Robert O’Brien said Trump himself had not been briefed on the matter because the intelligence reports “have not been verified.” U.S. military commanders at the time also said the raw intelligence did not lead them to change their force protection posture in Afghanistan.

“His entire presidency has been a gift to Putin, but this is beyond the pale,” Biden said of Trump last June, days after the reports first appeared. “It’s a betrayal of the most sacred duty we bear as a nation to protect and equip our troops when we send them into harm’s way. It’s a betrayal of every single American family with a loved one serving in Afghanistan or anywhere overseas.”

Biden raised the subject of the reported bounties on U.S. troops during his first call with Putin on Jan. 26, the White House said at the time. No mention of the topic was revealed by the White House after their latest call on Tuesday.

Defense officials and military commanders repeatedly said that the reports of bounties had not been corroborated by defense intelligence agencies and that they were not convinced the reports were credible. They also said they didn’t believe any bounties resulted in U.S. military deaths.

The White House said Thursday’s sanctions were in response to Russia’s interference in U.S. elections, crackdown on dissidents, cyberintrusions and its occupation of Crimea — but not the reported “bounties” placed on American troops.

Psaki added that U.S. intelligence has evidence that Russian military intelligence, known as the GRU, interacts with individuals in Afghan criminal networks.

“This information really puts the burden on Russia and the Russian government to explain their engagement here,” she said. 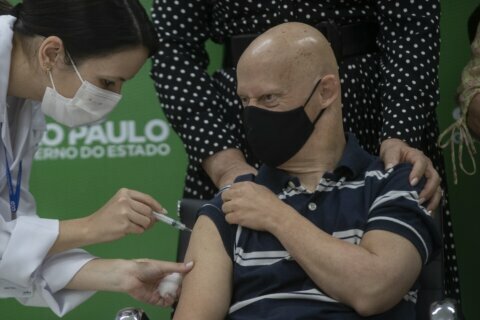