MANILA, Philippines — The Philippines is extending an already monthlong lockdown by two weeks as the country’s worst coronavirus infection spike starts to ease but remains alarming.

President Rodrigo Duterte said in televised remarks Thursday night that the second-most restrictive lockdown level will now run through May 14 in metropolitan Manila and four nearby provinces, a region of more than 25 million people. Mayors, however, cut a nine-hour night curfew in metropolitan Manila to six hours to help battered businesses.

Duterte is warning mayors and village chiefs that they face jail if they don’t prevent gatherings and other events that violate the pandemic restrictions.

Confirmed coronavirus infections in the Philippines soared past 1 million Monday, with deaths now at more than 17,000, the second highest in Southeast Asia.

— Vaccination teams in Italy visit homebound to give vaccine shots

DES MOINES, Iowa — With interest in coronavirus vaccines lagging in much of Iowa, public health officials plan to make shots available at gathering spots like farmers markets and sports events.

Gov. Kim Reynolds said Wednesday that the state is talking with groups including the Iowa Cubs baseball team and the Des Moines Downtown Farmers Market about holding mass vaccination clinics at those sites.

The governor is pushing to get 65% of Iowans vaccinated by May and 75% by June.

The new efforts are meant to overcome a decline in vaccination demand, as 80 of the state’s 99 counties this week have reduced requests for shots.

DETROIT — Detroit is adding to the gig economy: Drivers who take a city resident for a COVID-19 shot can get $50.

There is a $150 three-person cap per vehicle, but there’s no limit on the number of trips. Compensation will come in the form of a prepaid debit card.

“There shouldn’t be a single barrier for any Detroiter to get a vaccination, and certainly not transportation,” Mayor Mike Duggan said Wednesday.

Nearly half of Michigan residents 16 and older have received at least one shot. But in Detroit, it’s just 30%.

Drivers must register and schedule a first-dose appointment for their passenger. If they bring the person back for a second dose, they’ll get another $50 card, the city said.

Michigan continues to have the nation’s highest seven-day case rate, but the situation is improving. The seven-day daily average was 4,167, down from around 7,000 two weeks ago.

ALBUQUERQUE, N.M. — Gov. Michelle Lujan Grisham on Wednesday said she expects New Mexico to open by the end of June as long as the state reaches its goal of having at least 60% of residents fully vaccinated by then.

She made the announcement during a virtual briefing, proclaiming that the state was “conquering COVID.”

The governor and state health officials said the pace of vaccinations has been as an overwhelming driver for the progress seen in recent months, as more than 60 people are vaccinated for every new case of COVID-19 that is reported. The latest state data shows more than 41% of residents 16 and older are fully vaccinated.

“This is cause for incredible celebration,” the governor said as she predicted that New Mexico would be among the first states in the U.S. — if not the first — to have such a high percentage of its population fully vaccinated.

While capacity limits at restaurants and other businesses would be lifted once the vaccination goal is reached, the governor said COVID-safe practices will stay, including guidance on when and wear masks should be worn.

SAN FRANCISCO — California, swimming in vaccine, is in far better shape than just weeks ago when scoring an appointment was cause for celebration.

Today, Los Angeles, San Diego and other populous counties are advertising that anyone can walk in for a shot, and the state is texting reminders that plenty of appointments are available. Rural Humboldt County even declined 1,000 extra doses last week due to lackluster demand.

More than 18 million of an estimated 32 million people eligible for vaccine in California are fully or partially vaccinated, including nearly half of people in economically vulnerable ZIP codes hardest hit by the pandemic and 73% of residents 65 and older. The country’s most populous state, like much of the U.S., appears to have hit a vaccine plateau.

But that doesn’t mean everyone who wants a vaccine can get one.

Marlies Mokhtarzadeh was turned away from a downtown Millbrae pharmacy offering the one-shot Johnson & Johnson vaccine by a clerk who told her to make an appointment online. But Mokhtarzadeh, 80, isn’t able to do that and her granddaughters have also failed to book her an appointment so she’ll wait for her San Francisco Bay Area physician to get the vaccine instead.

MADRID — Spain’s health officials say that vaccination efforts are picking up pace after a record week in both the arrival of doses and the number of shots administered.

Spanish Health Minister Carolina Darias said Wednesday that the European country would receive 4 million doses of COVID-19 vaccines this week. That would be a high mark for Spain, whose vaccination campaign had suffered like the rest of the European Union from shipment delays by drugmakers.

Darias added that the 1.8 million shots administered over the past week was also a record for Spain.

Spain’s government is sticking to its pledge to get jabs in the arms of 70% of the population, some 33 million people, by the end of the summer. So far, 11.2 million of Spain’s 47 million inhabitants have received at least one shot.

Spain’s incidence rate remained steady at 230 cases per 100,000 inhabitants over 14 days. The nation’s state of emergency that has enforced mobility limitations and a nightly curfew is set to conclude on May 9.

ROME — A flight from New Delhi arrived Wednesday evening in Rome carrying 210 passengers, who will be placed in mandatory quarantine.

Officials said that a new ordinance signed earlier in the day by Health Minister Roberto Speranza requires that passengers arriving from India are quarantined for 10 days at a site indicated by Italian health officials, due to concerns about the deadly spike in that country.

The passengers were being tested upon arrival and anyone testing positive will be taken instead to a COVID hotel near Rome’s main Leonardo da Vinci International Airport. The 210 passengers include children.

Officials indicated that they were primarily Indian nationals who are residents in Italy.

DETROIT — A judge on Wednesday rejected a request to stop coronavirus testing of Michigan school athletes and other steps ordered by the state health department.

An injunction isn’t appropriate at this stage because a group called Let Them Play Michigan and its allies are unlikely to win the case, said Judge Michael Kelly of the Court of Claims.

The group argued that health department orders, especially quarantines and weekly virus testing for athletes ages 13 to 19, should have gone through a formal rule-making process.

But Kelly said state law “plainly gives” authority to the health director to issue emergency orders in response to a pandemic.

Spring lacrosse and soccer players must wear masks at all times. Athletes in baseball, golf, softball, tennis and track must wear a mask when on the sideline but not when actively competing, according to the Michigan High School Athletic Association.

Mexico has already received more than 1 million doses of Sputnik V in recent months. Ebrard says the state-owned company Birmex is working with the Russian Direct Investment Fund to prepare the bottling operations.

Mexico has already been bottling the Chinese-developed CanSino vaccine.

The domestic finishing of vaccines is part of Mexico’s efforts to obtain more shots. In addition to Sputnik V and CanSino, Mexico has been using the Pfizer, AstraZeneca and Sinovac vaccines.

The country has received 16.6 million doses and given some 12 million shots, coverng about 9.4% of the population. Mexico has vaccinated many of its senior citizens and plans to begin vaccinating people between ages 50-59 in May.

LONDON — Britain says it is buying 60 million more doses of the Pfizer coronavirus vaccine to give booster shots in the fall.

Health Secretary Matt Hancock says the new supply, which takes Britain’s total for the Pfizer shots to 100 million, will be part of the booster shot program later this year.

The government says the “most vulnerable” would be offered a booster shot before the winter, although it hasn’t identified those groups.

Britain has ordered 100 million doses of the AstraZeneca vaccine and tens of millions more of several other vaccines, not all of which have been approved for use. U.K. scientists are conducting a study on the effects of mixing different types of vaccine.

Like other countries, Britain has been hit by shortfalls in promised vaccine supplies. However, almost 65% of adults have received a dose of vaccine, while 25% have received both doses.

LONDON — Prince Charles says he is “deeply saddened” by the surge in coronavirus deaths in India and urged people to back a charity appeal to buy oxygen equipment to help the stricken nation.

In a message to the people of India, the heir to the throne says “as India has helped others, so now must we help India.”

Britain has a huge Indian diaspora community of about 1.4 million people, and many have sought to support their home country during this crisis.

The British Asian Trust, a charity Charles founded in 2007, launched an emergency appeal called “Oxygen for India” to buy oxygen concentrators, which can extract oxygen from the air when hospital infrastructure struggles to cope. The funds will be sent to the charity’s local partners in India to procure oxygen equipment for the seriously ill in both cities and harder to reach rural areas.

A first British government shipment of 200 pieces of medical equipment, including ventilators and oxygen concentrators, arrived in Delhi on Tuesday, and the rest is due to arrive by Friday.

ROME — Italy is sending India an oxygen production system that can be used to re-supply either traditional or field hospitals.

Draghi expressed his “deep closeness to the Indian people” and “Italy’s support won’t be lacking in this moment of difficulty.”

JOHANNESBURG — South Africa has resumed giving the Johnson & Johnson vaccine to health care workers after a more than two-week pause in the use of the only vaccine in the country.

South Africa restarted its drive to inoculate its 1.2 million health care workers with the J&J vaccines as part of a large-scale study. South Africa suspended its use of the J&J vaccine on April 13 after the U.S. Food and Drug Administration reported that it might be linked to rare blood clots.

With more than 1.5 million confirmed cases and 54,237 confirmed deaths, South Africa accounts for more than 30% of Africa’s 4.5 million cases and more than 40% of the 120,802 deaths, according to the Africa Centers for Disease Control and Prevention. 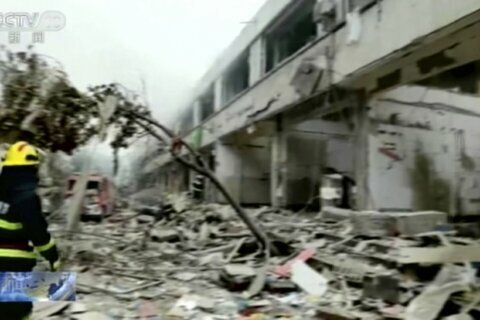