A South Korean exhibition company is trying to persuade an acclaimed American graffiti artist not to restore a $440,000 painting after it was accidentally vandalized by a couple who mistook it for participatory art.
Listen now to WTOP News WTOP.com | Alexa | Google Home | WTOP App | 103.5 FM

SEOUL, South Korea (AP) — A South Korean exhibition company is trying to persuade an acclaimed American graffiti artist not to restore a $440,000 painting after it was accidentally vandalized by a couple who mistook it for participatory art.

The artist, John Andrew Perello, also known as JonOne, has expressed a desire for his painting to be restored in a way that won’t financially burden the couple, who don’t face criminal charges, Jiyoon Son, a manager from Seoul-based Content Creators of Culture, said Friday.

While the exhibition was insured for damages, there’s no way the insurance company wouldn’t allocate at least some of the costs to the couple as long as JonOne wants his piece restored, Son said.

“We are trying to persuade the artist to consider not restoring his work. We have showed him the reactions from social media, which are favorable to his work but also sympathetic to the couple,” Son said.

She said it would take several weeks and about 10 million won ($9,000) to restore the painting, which remains on display at a shopping mall in Seoul.

The couple told Son’s company they thought spectators were meant to participate in JonOne’s artwork, “Untitled,” a huge wall painting that was set up with paint cans and brushes scattered around it. The piece wasn’t framed due to its large size.

The exhibition’s organizers alerted police when they found the new brush strokes on the painting, but withdrew their report after identifying the couple, saying they preferred handling the matter internally, according to Seoul’s Songpa Police Station.

“For us, the incident was baffling because we clearly stated in the caption that the paint cans and brushes were part of the artwork and also drew clear lines to separate the piece from spectators,” Son said.

Son said the defaced painting, which was part of an exhibition, will likely be displayed as scheduled until June 13. The painting’s size makes it difficult to move, which likely means any restoration work would have to be conducted on site, Son said. 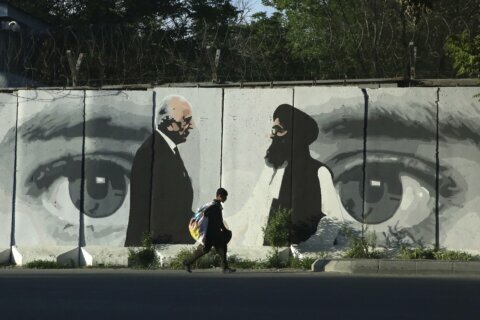