WASHINGTON (AP) — It won’t rival Netflix for drama, but 40 world leaders will try to save the planet from…
Listen now to WTOP News WTOP.com | Alexa | Google Home | WTOP App | 103.5 FM

WASHINGTON (AP) — It won’t rival Netflix for drama, but 40 world leaders will try to save the planet from ever-worsening global warming in a two-day climate summit livestreamed for binge viewing.

While there will be many faces on screen, this will clearly be President Joe Biden’s show.

Biden will convene the summit on Thursday, and what he says will call the shots for what’s to come. He’s trying to show that the United States is again serious about cutting pollution of heat-trapping gases with a new American goal for reducing emissions. Then he’ll try to cajole other nations to ratchet up the pollution-cutting promises they made in 2015’s Paris climate agreement. All of it via virtual diplomacy.

Along the way, there may be intrigue, potential conflicts and pathos. A viewer’s guide:

All sessions will be livestreamed on the White House and State Department channels. Sessions are scheduled to run from 8 a.m. EDT to midday on Thursday and Friday.

It’s simple: The U.S. is returning to the climate fight and wants to lead again.

For the Biden administration, this summit is “their version of ‘we’re baaack,’” said Henry “Jake” Jacoby, co-founder of the MIT Center for Global Change Science. “And they want to do that in a dramatic way.”

That dramatic way is to announce one of the world’s most ambitious national goals for cutting the gases that cause climate change: cutting them between 50% and 52% by 2030 compared with 2005.

“That is quite a welcome message after the four years we painfully witnessed,” said Christiana Figueres, the former U.N. climate chief, who helped forge the Paris accord. “The fact that the United States is back is very important.”

Human-caused climate change is getting worse around the globe. On average about 23 million people a year are displaced by weather-related storms, fires and floods, according to the World Meteorological Organization. Hundreds of billions of tons of snow and ice are lost each year. Sea level rise is accelerating.

“We are on the verge of the abyss,” U.N. Secretary-General Antonio Guterres said Monday.

Leaders still hope that somehow the more stringent Paris goal can be met even as scientists say it is less and less likely.

The leaders attending the summit represent “the group that will make it possible that we keep the 1.5-degree goal within reach,” U.N. climate chief Patricia Espinosa told The Associated Press.

The Paris agreement calls for ratcheting up 6-year-old commitments to cut carbon emissions with tougher goals aimed at 2030.

Biden’s new target aims for cutting the country’s greenhouse gas emissions from 50% to 52%, aiming to achieve it by emphasizing decarbonization across the government and economy.

That would put “the U.S. at the top of the pack,” said former Obama White House environment official Kate Larsen, a director at the private research Rhodium Group. It would be about the same as the European Union but behind the United Kingdom.

After the U.S. announces its target, other nations will be invited to present tougher targets.

Just as important is money, Espinosa said. That’s because poorer nations, which are using polluting fossil fuels to develop, need financial help to switch to cleaner but more expensive fuels. The Paris agreement commits richer nations, like the United States, to spend billions of dollars to help poorer nations because it makes the world cleaner for everyone, she said.

Years ago, the developed world committed to $100 billion in public and private financial help, much of which hasn’t been paid. Eventually that needs to increase to $1 trillion a year because that’s how much it will take to get the world to decarbonize and help poorer nations adapt to rising sea levels, worsening storms and other climate harms, former climate chief Figueres said.

The U.S. promised $3 billion in aid in Paris but paid only the first $1 billion. Then Trump canceled the rest. Biden has put $1.2 billion in his latest budget proposal.

“The U.S. is way behind on its commitment because of those four Trump years,” Figueres said. “And needs to play catch up, not on its own, but hand-in-hand with all of the other industrialized nations.”

This is Biden’s show, and he will kick it off, formally announcing the 50% to 52% emissions cut. He’ll be followed by the leaders of the world’s biggest economies, which spew 80% of the greenhouse gases.

The U.S., which has put the most greenhouse gases in the atmosphere over decades, and current top carbon-polluting nation China, last week issued a joint statement saying they’re working together to be more ambitious on climate. Chinese President Xi Jinping will deliver an important speech, the government announced. Also keep an eye on the leader of India, the third-biggest emitter.

Then there’s the human factor. The tighter Paris goal of 1.5 degrees Celsius is because small island nations, such as the Marshall Islands and Jamaica, said further warming and sea level rise could wash them out of existence. Some of those leaders will talk at the summit.

“The message they will bring humanizes climate change,” Figueres said. “Let’s not only talk about gigatons (of emissions), let’s talk about human impact today, not just in the future.”

Others to closely watch: leaders of Japan and South Korea, who are being pressured to stop financing new coal power plants in other countries.

Brazil President Jair Bolsonaro will be on the spot because his country’s 2030 goal is weaker than the nation’s 2025 goal and there’s pressure to stop Amazon deforestation. And Russia’s Vladimir Putin, who has clashed with Biden, will also appear.

This all leads to formal climate negotiations in November in Glasgow, Scotland, which is the big follow-up to the Paris agreement. The United Nations is counting on nearly 200 nations to announce tougher emission cut targets before that meeting, which will hash out still lingering issues.

“This week is getting the ball rolling,” said Nigel Purvis, a former State Department climate negotiator in Democratic and Republican administration. 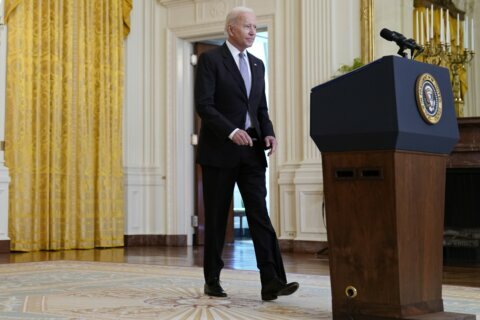