An additional 300,000 doses of the vaccine are expected to arrive on Friday, Civil Service Secretary Patrick Nip said Thursday.

Health officials said an investigation by BioNTech found no safety issues in the batch with packaging defects for some vials, as well as in a separate, unused batch of the vaccine.

“BioNTech believes that the efficacy of the vaccine has not been affected, so members of the public who have taken the BioNTech vaccine need not be worried,” said Constance Chan, Hong Kong’s director of health.

Random checks will also be stepped up to ensure that vaccine packaging is safe, she said.

Residents who missed their vaccine appointments due to the suspension will be rescheduled. Those waiting to receive their second doses will have appointments within the first few days of the resumption, officials said.

The packaging defects included loose caps and leakage from some bottles. Prior to the suspension, about 151,000 people had received the Pfizer vaccine in the city.

The suspension was a further blow to the city’s struggling vaccine drive. Since vaccinations began in February, only about 6% of the population has signed up and received shots compared to over 16% in Singapore, which started vaccinations only several days earlier.

Apart from the Pfizer vaccine, Hong Kong residents have the option to receive Chinese-made Sinovac shots, although acceptance of that vaccine has fallen after reports that several people with chronic illnesses died after getting it.

Hong Kong officials say the deaths were not directly linked to the vaccine, but widespread distrust of the government and of Beijing means fewer residents are willing to be inoculated with the Sinovac shots. 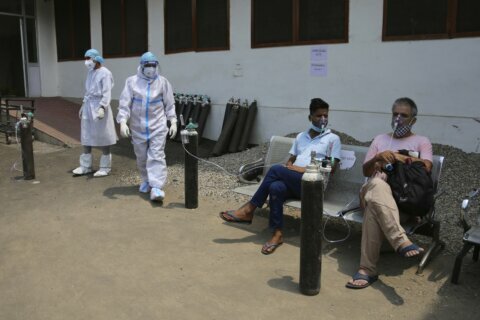