UNITED NATIONS (AP) — The U.N. special envoy for Myanmar warned Wednesday that the country faces the possibility of civil war “at an unprecedented scale” and urged the U.N. Security Council to consider “potentially significant action” to reverse the Feb. 1 military coup and restore democracy.

Christine Schraner Burgener didn’t specify what action she considered significant, but she painted a dire picture of the military crackdown and told the council in a closed briefing that Myanmar “is on the verge of spiraling into a failed state.”

“This could happen under our watch,” she said in a virtual presentation obtained by The Associated Press, “and failure to prevent further escalation of atrocities will cost the world so much more in the longer term than investing now in prevention, especially by Myanmar’s neighbors and the wider region.”

Schraner Burgener urged the council “to consider all available tools to take collective action” and do what the people of Myanmar deserve — “prevent a multidimensional catastrophe in the heart of Asia.”

A proposed press statement from the council was not issued after the meeting because China, a close neighbor of Myanmar, asked for additional time to consider its contents, likely until Thursday, several council diplomats said, speaking on condition of anonymity because the meeting was closed.

Chinese Ambassador Zhang Jun warned the council in remarks distributed by China’s U.N. Mission that “one-sided pressure and calling for sanctions or other coercive measures will only aggravate tension and confrontation and further complicate the situation, which is by no means constructive.”

He urged all parties to find a solution through dialogue that de-escalates the situation and continues “to advance the democratic transition in Myanmar,” warning that if the country slides “into protracted turbulence, it will be a disaster for Myanmar and the region as a whole.”

The coup reversed years of slow progress toward democracy in Myanmar, which for five decades had languished under strict military rule that led to international isolation and sanctions. As the generals loosened their grip, culminating in Aung San Suu Kyi’s rise to leadership in 2015 elections, the international community responded by lifting most sanctions and pouring investment into the country.

In the virtual meeting, Schraner Burgener denounced the killing and arrest of unarmed protesters seeking to restore democracy. She cited figures from Myanmar’s Assistance Association for Political Prisoners that as of Wednesday, some 2,729 people have been arrested, charged or sentenced since the coup and an estimated 536 have been killed.

The Security Council adopted a presidential statement — one step below a resolution — on March 10 calling for a reversal of the coup, strongly condemning the violence against peaceful protesters and calling for “utmost restraint” by the military. It stressed the need to uphold “democratic institutions and processes” and called for the immediate release of detained government leaders including Suu Kyi and President Win Myint.

The statement is weaker than the initial draft circulated by the United Kingdom, which would have condemned the coup and threatened “possible measures under the U.N. Charter” — U.N. language for sanctions — “should the situation deteriorate further.”

Stressing the urgency of action, Schraner Burgener told council members she fears that serious international crimes and violations of international law by the military “will become bloodier as the commander-in-chief seems determined to solidify his unlawful grip on power by force.”

“Mediation requires dialogue, but Myanmar’s military has shut its doors to most of the world,” she said at the virtual meeting. “It appears the military would only engage when it feels they are able to contain the situation through repression and terror.”

“If we wait only for when they are ready to talk,” Schraner Burgener warned that “a bloodbath is imminent.”

The U.N. envoy called on those with access to the military, known as the Tatmadaw, to let them know the damage to Myanmar’s reputation and the threat it poses not only to its citizens but to the security of neighboring countries.

“A robust international response requires a unified regional position, especially with neighboring countries leveraging their influence towards stability in Myanmar,” Schraner Burgener said, adding that she plans to visit the region, hopefully next week.

Schraner Burgener said intensification of fighting in Kayin State has sent thousands fleeing to neighboring Thailand and Conflict in Kachin State with the Kachin Independence Army near the Chinese border intensified “to its highest point this year.”

Armed ethnic groups on Myanmar’s eastern and western borders are also increasingly speaking out against “the brutality of the military,” she said.

The opposition of ethnic armed groups to “the military’s cruelty … (is) increasing the possibility of civil war at an unprecedented scale,” Schraner Burgener warned.

“Already vulnerable groups requiring humanitarian assistance including ethnic minorities and the Rohingya people will suffer most,” she said, “but inevitably, the whole country is on the verge of spiraling into a failed state.”

Democratically elected representatives to Myanmar’s National Assembly who formed a committee known by its initials CRPH sent a letter to Guterres and to Britain’s U.N. ambassador Wednesday urging the Security Council to impose “robust, targeted sanctions that freeze the assets of not only military leaders but also military enterprises and the junta’s major sources of revenue, such as the oil and gas sector.”

CRPH also urged the council to impose an arms embargo against the military, facilitate humanitarian assistance including cross-border aid, refer the situation in Myanmar to the International Criminal Court “to investigate and prosecute atrocity crimes committed by the military, including genocide, war crimes and crimes against humanity,” and consider whether there is a need to protect Myanmar’s people from such crimes.

British Ambassador Barbara Woodward, who called for the council meeting, said afterward that “we will continue to discuss next steps with other council members” to prevent the military “from perpetuating this crisis.”

“We want to consider all measures that are at our disposal,” she said, which include sanctions.

U.S. Ambassador Linda Thomas-Greenfield told reporters before the council meeting that if the military don’t go back to their barracks and continue to attack civilians “we can’t just step back and allow this to happen.”

“Then, we have to look at how we might do more,” she said.

Russia’s deputy U.N. ambassador, Dmitry Polyansky, told reporters Tuesday that all council members want the violence to stop and a restoration of dialogue and national unity. But he accused some countries and media outlets of “inciting the protesters to continue their protests,” which amounts to interfering in Myanmar’s internal affairs.

“Russia is not a big fan of sanctions” and “punitive measures,” Polyansky said, “We shouldn’t overstep this very thin line between trying to help and interfering into the internal affairs of sovereignty.” 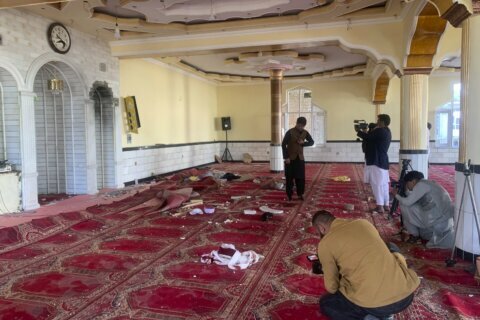 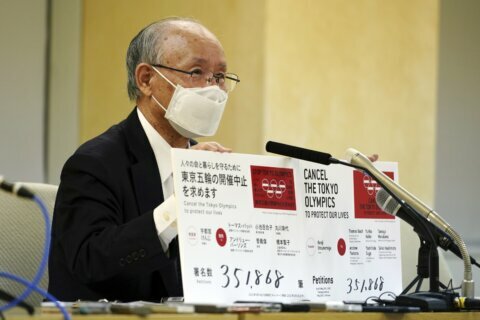