COLOMBO, Sri Lanka (AP) — Sri Lanka’s government said Tuesday it will allow India and Japan to develop a new container terminal at the country’s main port, several weeks after scrapping a deal with the two countries to develop one of the key terminals at the same port.

Sri Lanka halted the 2019 agreement for India and Japan to develop and operate the crucial East Container Terminal at Colombo Port after weeks of protests by trade unions and opposition parties. It said the terminal will be fully owned and developed instead by the state-run Ports Authority.

Japan said it regretted the Sri Lankan decision, while India urged that the 2019 agreement be implemented.

Sri Lanka announced on Tuesday that it would develop another terminal — West Container Terminal — at the same port with India and Japan.

Government spokesman Keheliya Rambukwella said the Cabinet approved the project, to be run as a public-private company with the Ports Authority and companies selected by the governments of India and Japan.

India has selected Adani ports, which was earlier chosen to invest in the East Container Terminal. Japan has not yet named its investor in the project, which will be operated on a build, operate and transfer basis for 35 years.

Rambukwella said the government was offering foreign participation in the West terminal because it requires a large investment to be developed, while the East terminal is completed and requires little additional money.

India was particularly interested in the East terminal because it contributes about 66% of the re-exports from that terminal.

India, which considers the Indian ocean region to be its strategic backyard, has for years been worried by rival China’s growing economic and political influence over neighboring Sri Lanka.

China considers Sri Lanka to be a critical link in its massive “Belt and Road” global infrastructure building initiative and has provided billions of dollars in loans for Sri Lankan projects over the past decade. The projects include a seaport, airport, port city, highways and power stations.

China already operates the Colombo International Container Terminal as a joint venture with the Ports Authority.

Critics say the Chinese-funded projects are not financially viable and that Sri Lanka will face difficulty in repaying the loans.

In 2017, Sri Lanka leased a Chinese-built port located near busy shipping routes to a Chinese company for 99 years to end the heavy burden of repaying the Chinese loan used to build it.

The facility is part of Beijing’s plan for a line of ports stretching from Chinese waters to the Persian Gulf. China has also agreed to provide a $989 million loan to Sri Lanka to build an expressway that will connect its tea-growing central region to the Chinese-run seaport.

Japan and India are members of Quad, a group of Indo-Pacific nations that also includes the U.S. and Australia that is seeking to counter Chinese influence in the region. 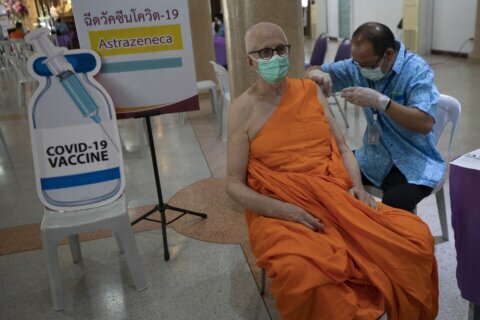