Shelters being built in Bangladesh Rohingya camp after fire

COX’S BAZAR, Bangladesh (AP) — Authorities and volunteers from aid agencies in southern Bangladesh were rebuilding shelters on Wednesday for thousands of Rohingya refugees who lost their dwellings to a devastating fire that killed at least 15 people, including children, officials said

Thousands of refugees became homeless in Monday’s fire that raced through Balukhali camp at Ukhiya in Cox’s Bazar district, home to more than 1 million Rohingya refugees from neighboring Myanmar.

But the devastation was widespread and it could take a while to rebuild what was destroyed.

In addition to razing the homes of 10,000 families, the fire destroyed the area’s infrastructure, hospital, food centers, markets, schools and health clinics, according to Manuel Marques Pereira, IOM’s deputy chief of mission in Bangladesh.

“And it will take several months to put everything back to the level that it was prior to the fire,” Pereira said.

He said easy access points for emergency services were important to avoid the loss of lives in the event of such disasters.

“It’s very important that there are access points for the emergency services and for the individuals to leave a certain area,” he said.

Khan said they ordered an investigation to see if it was a sabotage.

“I want to express our deepest sorrow for the people who have been affected by the fire,” he said while speaking to journalists after his visit.

The U.N. High Commissioner for Refugees said Tuesday rescuers recovered at least 15 charred bodies from the debris while at least 400 people were still missing and around 560 were injured by the fire.

Around 45,000 people were displaced by the fire, which broke out Monday afternoon and burned well into the night, the UNHCR said.

The U.N.‘s World Food Program in a situation report said Tuesday many affected people took refuge in nearby camps, at friends’ shelters, learning centers for children or temporary transit sites.

Monday’s massive fire came just months ahead of Bangladesh’s monsoon season, when cyclones and heavy rains between June and October batter the region and often lead to floods. In January, another fire destroyed hundreds of shanty-like homes in the camp, leaving thousands without shelter.

Bangladesh has sheltered more than a million Rohingya Muslims, the vast majority having fled Myanmar in 2017 in a major crackdown by that country’s military.

The U.N. has said the crackdown had a genocidal intent, a charge Myanmar rejects.

Bangladesh has hosted the refugees in crowded refugee camps and is eager to begin sending them back to the Buddhist-majority Myanmar.

Several attempts at repatriation under a joint agreement failed because the Rohingya refused to go, fearing more violence in a country that denies them basic rights including citizenship.

The move has fallen into more uncertainty after the country’s military staged a coup in February after a short span of quasi-democracy since 2011. 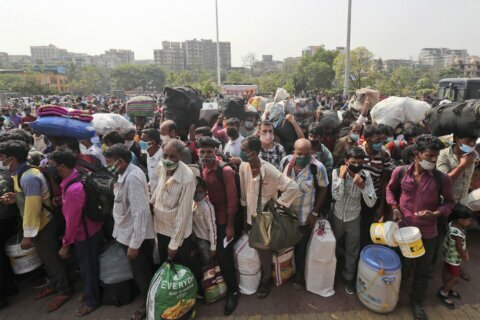