YANGON, Myanmar (AP) — Myanmar’s ruling junta on Monday imposed martial law in parts of the country’s biggest city, a day after at least 38 people were killed in the bloodiest crackdown yet on resistance to last month’s military coup.

NOT THE FIRST RESTRICTIONS

After the Feb. 1 coup that ousted Aung San Suu Kyi’s elected government, the military declared a nationwide state of emergency and gave itself broad powers. It also put in place similar but milder restrictions to martial law in dozens of townships across the country.

Those earlier measures used Section 144 of the penal code and the main impact was a ban on gatherings of more than five people — which was generally ignored — and an 8 p.m. to 4 a.m. curfew, which protesters last week began defying in large numbers.

MARTIAL LAW TRUMPS ALL ELSE

Martial law basically supersedes all other law, allowing the military total authority over the specified area, including administrative, judicial and law enforcement functions.

The imposition of martial law in six townships in Yangon in legal terms legitimizes actions that the military had already been taking to suppress the protests. The immediate trigger appeared to be escalating violence — mostly on the part of the security forces but with increasing signs that at least some demonstrators are starting to take active self-defense measures including burning tires at makeshift barricades.

The official order issued Monday said martial law was imposed “to take more effective measures for the security, rule of law and community peace and tranquility.”

Violators of orders issued by the military can now be tried by military courts and could face punishments as harsh as death or life imprisonment, according to local news outlet Eleven Media. The minimum punishment, it said, was three years in prison with hard labor and a fine.

The first two places martial law was declared were two Yangon townships that are industrial zones home to garment factories, a major source of export earnings for Myanmar. One of those townships, Hlaing Thar Yar, was the scene of Sunday’s worst violence, with at least 22 protesters killed. Later the order was extended to another heavily industrial Yangon township as well as three other townships in the city.

The declaration follows reports that at least two factories that have Chinese ownership were set on fire Sunday night. It was not clear who set the fires.

“China requires Myanmar to take further effective measures to stop all violent acts, investigate and deal with relevant perpetrators in accordance with the law, and ensure the safety of the lives and property of Chinese enterprises and personnel in Myanmar,” the statement said.

Many factories in Myanmar have Chinese ownership or partners. China’s political and economic clout in Myanmar is a point of great resentment among many Myanmar people, who accuse China of exploiting their country for its natural resources and protecting the military from international consequences. 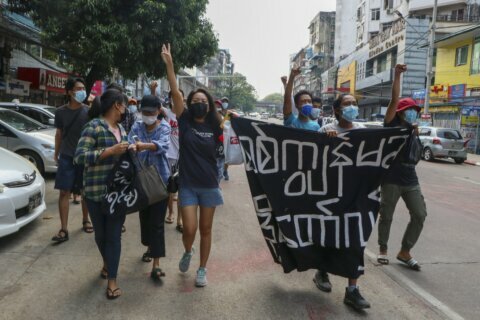 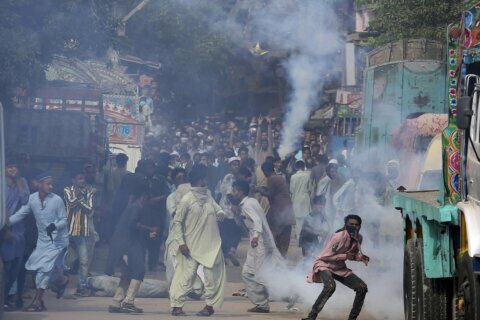