YANGON, Myanmar (AP) — Thein Zaw, a journalist for The Associated Press who was arrested more than three weeks ago while covering a protest against the coup in Myanmar, was released from detention on Wednesday.

Visibly thinner than before his arrest, Thein Zaw waved and smiled to photographers as he left Yangon’s Insein Prison, notorious for decades for holding political prisoners.

His brothers and best friend took him home, which is an area of Yangon that has been placed under martial law. He told the AP that his mother told him through tears: “We thought we’d never see you again.”

Thein Zaw had earlier said that the judge in his case announced at a court hearing that all charges against him were being dropped because he was doing his job at the time of his arrest.

He said that while in prison he was “worried every day,” and last week he marked his 33rd birthday behind bars.

Despite his relief, he said he was concerned about the many journalists who remain imprisoned.

“Thanks to all who tried so hard for my release,” he said. “But one thing that upsets me is that there are some people who are still inside, and I hope that they can get out as soon as possible.”

Thein Zaw’s father, Ba Win, greeted him with shampoo because it is local custom that people returning from prison must wash their hair before entering the house. His parents prepared pork curry and fish curry for his first meal at home.

His release was also emotional for lawyer Tin Zar Oo, who said she cried and jumped for joy when the judge announced the charges were being dropped.

“I was so happy. Thein Zaw looked at me, and I was even at a loss for words when they asked me if I had anything to say,” she said. “I hugged Thein Zaw, and we both cried with joy.”

Her client had been charged with violating a public order law that carries a penalty of up to three years’ imprisonment.

He was one of nine media workers taken into custody during a Feb. 27 street protest in Yangon, the country’s largest city, and had been held without bail. About 40 journalists have been detained or charged since the Feb. 1 coup that ousted the elected government of Aung San Suu Kyi, roughly half of whom remain behind bars.

Authorities have also arrested thousands of protesters since the takeover as part of an increasingly brutal crackdown. On Wednesday, more than 600 demonstrators were released, a rare conciliatory gesture by the military that appeared aimed at placating the protest movement.

The AP and many press freedom organizations have called for the release of Thein Zaw and the other detained members of the press.

“The Associated Press is deeply relieved that AP journalist Thein Zaw has been freed from prison in Myanmar,” said Ian Phillips, AP vice president for international news. “Our relief is tempered by the fact that additional journalists there remain detained. We urge Myanmar to release all journalists and allow them to report freely and safely on what is happening inside the country.”

Thein Zaw was arrested as he was photographing police, some of them armed, charging down a street at anti-coup protesters. A video shows that although he stepped to the side of the street to get out of their way, several police rushed over and surrounded him. One put him in a chokehold as he was handcuffed and then taken away.

Tin Zar Oo saw her client for the first time since his arrest at a hearing on March 12 at which his pre-trial detention was renewed — and even then it was through a video link.

The International Press Institute, headquartered in Vienna, welcomed the release, saying he “was detained for doing his job as a journalist and should never have been behind bars in the first place.”

“Myanmar must now immediately release all other journalists it is holding,” said Scott Griffen, the institute’ deputy director. “The military junta must stop all forms of harassment and intimidation of media covering demonstrations against the coup and end restrictions on publication and broadcasting by media outlets in the country.” 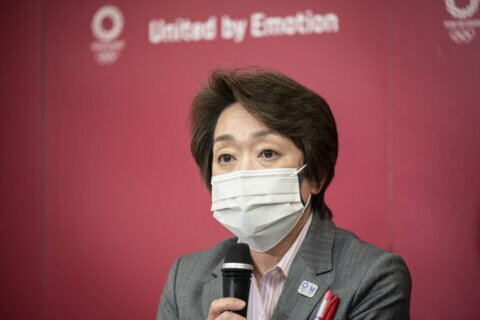