TOKYO (AP) — The Japanese economy grew at an annual rate of 12.7% in October-December, marking the second straight quarter of growth, amid a recovery from the slump caused by the coronavirus pandemic, according to government data released Monday.

The world’s third-largest economy saw growth in consumption, government spending and exports for the final quarter of last year, compared to the previous quarter, the Cabinet Office said.

Japan’s seasonally adjusted gross domestic product had grown at a dramatic annualized rate of 22.9% in the July-September period.

GDP is the sum value of a nation’s products and services. The annualized rate shows what the rise or drop would have been if that same pace had continued for a year.

Prospects for the future appear relatively good, with trade resuming, and a vaccine rollout in nations that are Japan’s key trading partners, such as the U.S. and other Asian nations.

For the 2020 calendar year, Japan’s economy sank 4.8%, the first year of contraction in 11 years. On quarter, the economy grew 3% in October-December, according to preliminary data.

Japan never had a lockdown for COVID-19, trying to keep business activity going while encouraging working from home and social distancing.

A so-called state of emergency, centered around having restaurants and other businesses close at 8 p.m., is being used in Tokyo and some other urban areas where infection clusters have popped up.

Junichi Makino, SMBC Nikko Securities chief economist, said that, although the first quarter of this year may see a setback, because of the state of emergency, a gradual recovery track is expected as overseas economies return to normal and the emergency likely gets ended next month.

“With the coronavirus pandemic getting curbed, the end of the state of emergency and the rollout of the vaccine, the Japanese economy is expected to start recovering, returning to normal, starting from the April-June quarter,” Makino said.

Japan’s larger overall economic problems remain, such as sinking wages and declining international competitiveness, which have led to stagnation in recent decades.

Social changes that require time would be needed to correct those problems, such as encouraging overseas investment and fixing education to nurture entrepreneurship.

That means shoppers try to make up for “lost time” by buying more, because they had to stay home and didn’t buy as much for extended periods because of the pandemic, he said.

A vaccine rollout has yet to start in Japan but is set to begin this week with medical workers. Japan, with about 6,900 COVID-19 deaths, has seen far fewer such deaths than in the U.S. and some other nations. 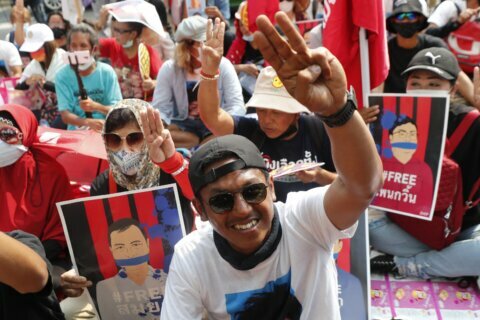 The Latest: New Zealand to use only Pfizer virus vaccine