SEOUL, South Korea (AP) — South Korean officials are taking steps to limit travel and gatherings during next week’s Lunar New Year’s holidays, allowing train operators to sell only window seats and passenger vessels to operate at half capacity, as they fight a steady rise in coronavirus transmissions.

Senior Health Ministry official Yoon Taeho announced the plans on Wednesday while repeating a plea for people to stay home. He said officials will strengthen sanitization and install more thermal cameras at train stations, bus terminals and airports. Travelers will be required to be masked at all times and will be prohibited from eating food at highway rest areas.

Officials have also extended a clampdown on private social gatherings of five or more people, which they enforce by fining restaurants and other businesses if they accept large groups. Indoor dining at restaurants in the greater capital area will continue to be prohibited after 9 p.m.

Lunar New Year is celebrated around Asia and a popular time for people to travel to visit their relatives. China also has tried to discourage travel during the holiday to avoid the risk of viral outbreaks.

The holiday will come just after South Korean health officials detected the first local transmissions of what are feared to be more contagious forms of the virus first identified in Britain and South Africa.

The Korea Disease Control and Prevention Agency said Wednesday that it found four cases of the British variant and one case of the South African variant where virus carriers were infected locally.

Since October, health workers have found 39 cases of new variants of the virus that causes COVID-19, also including a form that was first identified in Brazil, but the previous cases were international arrivals.

In all five of the locally transmitted cases, the virus carriers had been infected from relatives who recently arrived from abroad, the agency said.

The KDCA said it is expanding contact tracing to determine whether the new variants could have circulated further.

It also called for administrative officials to strengthen monitoring of passengers arriving from abroad so that they minimize their contact with other people during their two-week quarantine period, which in many cases can be done at home.

South Korea reported 467 new infections of the coronavirus on Wednesday, which brought the national caseload to 79,311, including 1,441 deaths.

— An international health group established to promote global access to coronavirus vaccines says North Korea could potentially receive 1.9 million doses of vaccines manufactured in India during the first half of the year. The Worth Health Organization-backed COVAX facility said in a forecast published Wednesday that the supplies going to North Korea will likely be provided by India’s Serum Institute, which is licensed to produce vaccines AstraZeneca developed with the University of Oxford. COVAX said it expects to globally distribute 336 million doses of the AstraZeneca vaccine, most of them produced by Serum, and another 1.2 million doses of vaccine Pfizer jointly developed with BioNTech during the first six months of the year. It says the doses cover, on average, 3.3% of the population of the 145 countries participating in the program. COVAX provided its estimate with caveats, saying that actual allocation and delivery of the vaccines could be affected by manufacturing and operational issues, readiness of receiving countries and whether and when the WHO grants the AstraZeneca vaccines for emergency use. Unlike the Pfizer vaccines, which are required to be stored in extremely cold temperatures, AstraZeneca vaccines can last for months in the temperatures of a normal refrigerator. This makes them easier to roll out in countries with poor health care systems like North Korea. With a population of more than 25 million, North Korea is by far the largest nation yet to report a single case of the virus, although there’s widespread skepticism over leader Kim Jong Un’s claim of a perfect record in keeping out the “evil” virus. Describing its anti-virus campaign as a matter of “national existence,” the country has severely restricted cross-border traffic, banned tourists, flown out diplomats and mobilized tens of thousands of health workers to screen entry points, monitor residents and isolate those with symptoms.

— Japan has enacted legislation allowing officials to enforce coronavirus measures by punishing violators of mandatory orders with fines. This comes as the country struggles to slow a wave of infections amid growing uncertainty about the distribution of vaccines considered key to holding the Olympics this summer. The legislation was passed by the parliament and enacted into law the day after Prime Minister Yoshihide Suga extended an ongoing non-binding state of emergency in Tokyo and nine other urban areas by one month until March 7. Under the revised laws that take effect next week, restaurants, bars and other business owners that defy mandatory orders for shorter service hours or closures can be fined up to 300,000 yen ($2,860). Fines of up to 500,000 yen ($4,760) can be imposed on infected people who refuse to be hospitalized, and up to 300,000 ($2,860) to those who refuse to cooperate with health authorities in contact tracing and other surveys. Daily new cases have declined since January, but serious cases are still putting pressure on hospitals, experts say. The health ministry reports Japan had 393,836 confirmed cases and 5,912 confirmed deaths as of Tuesday.

— New Zealand’s medical regulator has approved its first coronavirus vaccine, and officials hope to begin inoculating border workers by the end of March. Medsafe on Wednesday gave provisional approval for the vaccine developed by Pfizer and BioNTech for people aged 16 and over. Prime Minister Jacinda Ardern welcomed the development, saying it meant the country could begin preparing for its vaccine rollout. New Zealand has no community transmission of the virus, and border workers are considered the most vulnerable to catching and spreading the disease because they deal with arriving travelers, some of whom are infected. However, New Zealand’s success in stamping out the virus also means it will need to wait longer than many other countries to get vaccine doses for the general population. Officials say they hope to begin general inoculations by midyear. 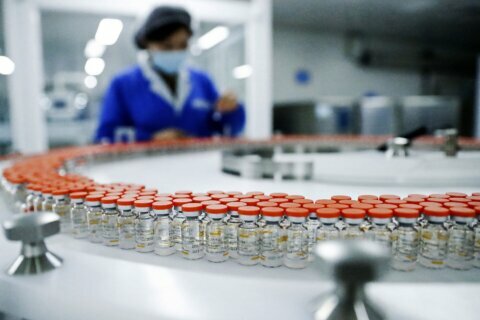 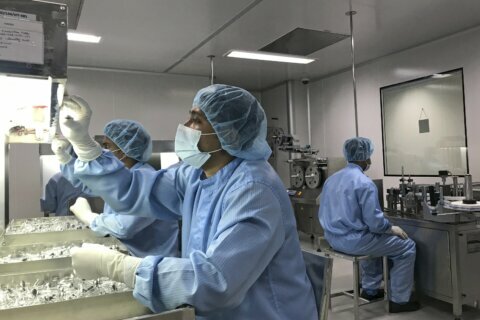