KATHMANDU, Nepal (AP) — Riot police in Nepal clashed for hours Monday with thousands of protesters demanding a return of the monarchy that was abolished more than a decade ago and the reinstatement of a Hindu state.

Police blocked the main road to the prime minister’s office, using batons to beat the protesters, who responded by throwing rocks and sticks. There were no reports of serious injuries.

It was the latest in a series of protests against Prime Minister Khadga Prasad Oli’s government by a variety of groups, including a faction of his governing Communist party.

The unrest, fueled by Oli’s failure to honor an agreement to split his term as prime minister with the co-leader of the governing party, has increased distrust of the political system.

The protesters on Monday accused the government of corruption and using force against peaceful rallies.

“King please come back and save our country. We want the monarchy back, abolish the republic,” the demonstrators chanted as they waved the country’s flag.

Weeks of street protests in 2006 forced then King Gyanendra to abandon his authoritarian rule and introduce democracy. Two years later, a newly elected parliament voted to abolish the monarchy and declared Nepal a republic with a president as head of state.

Since then, Gyanendra has been living in Nepal as a private citizen with no power or state protection. He still has some support among the people but little chance of returning to power.

The protesters also demanded that Nepal again be declared a Hindu state. Most Nepalis are Hindu, but soon after the king’s rule ended, parliament also decided to turn the country into a secular state.

Oli became prime minister after his Nepal Communist Party won elections three years ago. His party and the party of former Maoist rebels had merged to form a unified Communist party ahead of the vote.

Tensions, however, have grown between Oli and the leader of the former rebels, Pushpa Kamal Dahal, who is co-chair of the combined party. The two had previously agreed that they would split the five-year prime minister’s term between them, but Oli has refused to allow Dahal to take over.

Instead, Oli ordered the dissolution of parliament last month and announced new elections later this year.

Parliament’s dissolution has been protested by Dahal’s faction and by opposition groups. 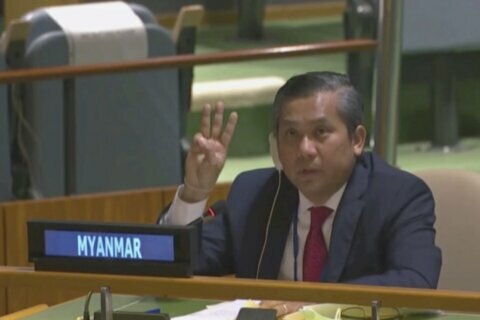