Health Minister Kwon Deok-cheol said Saturday the second highest level of distancing rules will remain in place for the Seoul region until Jan. 17. He says the third highest level of restrictions will stay in other areas until then.

— In California, coronavirus infections are racing out of control.

— Only about half of the Americans who volunteered to test COVID-19 vaccines got the real thing. Now experts debate whether all volunteers should.

— Israel says it has vaccinated 1 million peopl e against COVID-19 as it rolls out one of the world’s earliest and most rapid inoculation campaigns.

— Authorities in Belgium say a 27th elderly person has died in an outbreak at a nursing home from a super-spreading St. Nick party last month.

— Turkey’s health minister says the country has identified 15 people who carry a highly contagious coronavirus variant that was discovered in the United Kingdom.

The state Department of Public Health said Friday there were more than than 47,000 new confirmed cases reported, bringing the total to more than 2.29 million.

Hospitals in the state ended the year on “the brink of catastrophe,” a health official said as the pandemic pushed deaths and sickness to staggering levels and some medical centers scrambled to provide oxygen for the critically ill.

The collaboration comes as older hospitals are having difficulty maintaining oxygen pressure in aging infrastructure and some were scrambling to locate additional oxygen tanks for discharged patients to take home.

California this week became the third state to exceed 25,000 COVID-19 deaths since the start of the pandemic.

AUSTIN, Texas — Texas hit a new record high for patients hospitalized with COVID-19 for the fifth consecutive day Friday, in a continued surge of the disease caused by the novel coronavirus following holiday gatherings and travel.

State health officials on Friday reported 12,369 new, confirmed cases of the virus and another 3,658 probable cases.

According to the Texas Department of State Health Services, intensive care units in several parts of Texas were full or nearly full.

The grim count has continued to climb as some Texans gathered to celebrate the new year, despite warnings from health officials that congregation is likely to further spread the virus.

Seven-day rolling averages of daily new cases and daily deaths in Nevada dropped over the past two weeks. That’s according to data from Johns Hopkins University and The COVID Tracking Project.

Concerns are mounting about the ability of the already stretched National Health Service to handle the anticipated increase in the number of people seeking treatment for COVID-19.

Field hospitals that were constructed in the early days of the pandemic but that were subsequently mothballed are being reactivated.

The Royal College of Nursing’s England director says the U.K. is in the “eye of the storm.”

Over 55,280 new infections and another 613 deaths were recorded Friday, putting the U.K. on track to once again overtake Italy as Europe’s worst-hit country in the pandemic.

The spike in new cases is said to be due to a new, more contagious variant of the virus first identified around London and the southeast of England.

BALTIMORE — The number of confirmed U.S. coronavirus cases has surpassed 20 million, according to data from Johns Hopkins University.

That’s nearly twice as many as the No. 2 country, India, and nearly one-quarter of the more than 83 million cases globally.

The U.S. continued to surpass other countries in COVID-19 cases as it reached 20 million at the start of the new year, according to data kept by Johns Hopkins University.

COVID-19 deaths have also increased in the country, now totaling more than 346,000.

India and Brazil trail behind the U.S. in coronavirus cases at over 10 million and 7 million, respectively.

The increase comes as officials race to vaccinate millions of Americans but have come off to a slower and messier start.

President-elect Joe Biden criticized the Trump administration Tuesday for the pace of distributing COVID-19 vaccines and vowed to ramp up the current speed of vaccinations. However, Biden acknowledged that it “will still take months to have the majority of Americans vaccinated.”

WASHINGTON — Republican Sen. Mitt Romney of Utah is assailing the slow pace of vaccinations against the coronavirus.

He says it’s “incomprehensible” and “inexcusable” that the Trump administration has not developed an efficient federal vaccination model for the states.

Romney says it was unrealistic to assume that health care workers already overburdened caring for COVID-19 patients could carry the brunt of the vaccination program or that the big drugstore chains would have the workers to inoculate millions.

He’s suggesting that public health authorities seek to enlist all retired or active medical professionals who are not otherwise engaged in care, as well as veterinarians, combat medics, medical students and first responders in the effort. He says they could be easily trained to administer the vaccines.

Overworked, underfunded state public health departments have been scrambling to get up to speed on vaccinations even for the frontline workers and long-term care residents who were given priority.

MILAN, Italy — Italy added another 462 virus deaths on Friday for a known pandemic death toll of 74,621, the highest in Europe.

Italy’s daily death toll remains stubbornly high more than two months into restrictive measures and in the second week of a modified lockdown.

The number of new positives dipped by 5% from a day earlier, to 22,211, while 15% fewer tests were administered, according to Health Ministry statistics. Italy is launching its vaccine campaign and is first targeting residents of nursing homes and medical personnel.

PORTLAND, Ore. — An Oregon health care worker has been hospitalized after having a severe allergic reaction to the Moderna COVID-19 vaccine.

The Oregon Health Authority says the employee at Wallowa Memorial Hospital experienced anaphylaxis after receiving a first dose of the vaccine this week.

The health authority said vaccines for COVID-19 can cause mild to moderate side effects in some people. This can include pain and swelling on the arm and sometimes fever, chills, tiredness and headache. In rare cases, some people have experienced severe allergic reactions.

So far, 38,698 doses of the COVID-19 vaccines have been administered in the state of Oregon since the week of Dec. 13.

FORT YATES, N.D. — The Standing Rock Sioux Tribe in North Dakota is prioritizing the distribution of COVID-19 vaccines to those who speak Dakota and Lakota languages.

“It’s something we have to pass on to our loved ones, our history, our culture our language. We don’t have it in black and white, we tell stories. That’s why it’s so important,” Faith said.

The Standing Rock reservation straddles the North Dakota and South Dakota border and is home to about 8,000 people, more than half of whom live in North Dakota.

Faith said only about 300 people on the reservation are fluent in the language.

Frontline health care workers already have begun receiving he vaccine at the Fort Yates hospital, but starting next week priority will be for those who speak their native language.

PARIS — Ravers at an underground, curfew-violating New Year’s Eve party that drew at least 2,500 people in western France attacked police units sent to shut them down, torching a vehicle and injuring officers with bottles and stones, officials said Friday.

Hundreds of vehicles carrying party-goers started converging on hangars in Lieuron, Brittany, on Thursday night, the regional government Friday said in a statement.

Gendarmes and their vehicles were attacked when they tried to stop the ravers from installing their party gear. Some officers suffered light injuries, the statement said. On Friday morning, 2,500 ravers from France and abroad were still partying, circled by a reinforced police presence.

BANGKOK — The Thai capital is shutting down venues including schools and entertainment parks as coronavirus cases continue to spread.

Seven provinces including Bangkok have been designated red zones where places including entertainment venues, boxing rings, gyms and flea markets are ordered closed. Restaurants are allowed to serve only takeouts.

The restrictions are in place until mid-January.

The new outbreak has spread from the country’s largest wholesale seafood market in Samut Sakhon south of Bangkok and the gambling den in Rayong, and both places continue to log the highest number of infections. Bangkok reported 180 cases in the last 24 hours.

A spokesman for the COVID-19 center, Dr. Taweesilp Visanuyothin, said that the Health Ministry had contacted Oxford-AstraZeneca to purchase a second batch of 26 million doses of the vaccine. The deal would double the number of doses to be supplied by the British vaccine manufacturer.

The first 2 million doses are expected in February and March and will be given to medical staff.

BEIJING — Two major airports in northeastern China are requiring departing passengers show a negative coronavirus test taken over the previous 72 hours before they can board their planes.

The requirements by the Shenyang and Dalian come amid a small but persistent growth in cases in the two cities located in Liaoning province just north of the capital Beijing.

Four new cases were announced Friday in Liaoning, along with another five cases in Beijing, where emergency testing was ordered for more than a million people following the detection of a small cluster in the northeastern suburbs.

Wary of another wave of infections, China is urging tens of millions of migrant workers to stay put during next month’s annual Lunar New Year holiday, usually the world’s largest annual human migration. Classes are also being dismissed a week earlier than usual and tourists are being told not to come to Beijing for holidays.

China on Friday reported a total of 19 new virus cases, including 10 that were brought from outside the country. Since the novel coronavirus was first detected in the central city of Wuhan in late 2019, China has reported a total of 87,071 cases and 4,634 deaths, although some question whether those figures underreport the full extent of the outbreak in China the country. 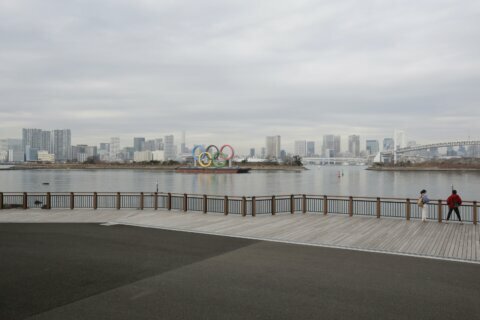