ISLAMABAD (AP) — The U.S. envoy who brokered the ongoing peace talks between the Afghan government and the Taliban said Wednesday the two sides have overcome a three-month impasse and agreed on rules and procedures for the negotiations.

The development is significant as it means the warring sides are getting closer to actually starting to negotiate the issues that could end decades of fighting in Afghanistan and determine the country’s post-war future. But first they must decide on the agenda for the negotiations, which is the next step.

In a series of tweets, U.S. envoy Zalmay Khalilzad said there was a signed document and urged both the Taliban and the government to get down to the business of negotiating a “political roadmap and a cease-fire.”

The three-page document lays out the rules and procedures for the negotiations, which are taking place in Qatar where the Taliban have long maintained a political office.

Afghans “now expect rapid progress on a political roadmap and a ceasefire. We understand their desire and we support them,” Khalilzad tweeted.

A cease-fire, rights of women and minorities, and constitutional amendments are expected to top the agenda. But the list is likely to be long and contentious, with issues such as safety guarantees for thousands of Taliban fighters who disarm, as well as for disbanding the heavily armed militias loyal to Kabul warlords, many of them allied either with the government or opposition politicians.

U.S. Secretary of State Mike Pompeo, who on Feb. 29 signed a Taliban-U.S. deal that paves the way for withdrawal of American troops from Afghanistan, welcomed the agreement.

“As negotiations on a political roadmap and permanent ceasefire begin, we will also work hard with all sides in pursuit of a serious reduction of violence,” he said.

Khalilzad’s announcement was not unexpected — last month, the Taliban said the rules and procedures were settled and the U.S. said last week it was all but wrapped up. But then the Afghan government said it had concerns with the some of the words in the preamble that set off accusations that Afghan President Ashraf Ghani was holding up the deal. His spokesman denied this.

There were no details about the document, but Taliban spokesman Mohammed Naeem said the two sides have appointed a committee to hammer out the agenda items.

Since the Afghan-Taliban talks started in September, violence has spiked significantly. The Taliban have staged deadly attacks on Afghan forces while keeping their promise not to attack U.S. and NATO troops. The attacks have drawn a mighty retaliation by the Afghan air force, backed by U.S. warplanes. International rights groups have warned both sides to avoid inflicting civilian casualties.

In Washington, U.S. Gen. Mark Milley, chairman of the Joint Chiefs of Staff, said the military’s plan for reducing American troop levels in Afghanistan to 2,500 by mid-January has been approved by the acting secretary of defense, Christopher Miller. Milley declined to discuss the plan beyond saying that the smaller U.S. force would operate from “a couple of larger bases,” along with several smaller ones, in order to continue its current missions of combatting extremist groups like al-Qaida and training and advising Afghan defense forces.

Milley asserted that the U.S. has achieved “a modicum of success” in Afghanistan after more than 19 years of war, given that there has not been a repeat of the Sept. 11, 2001 terrorist attacks on the U.S. homeland. Noting that President Donald Trump made the decision to reduce the U.S. force to 2,500, Milley said, “What comes after that, that will be up to a new administration; we’ll find that out on the 20th of January and beyond.”

In Brussels, NATO Secretary-General Jens Stoltenberg welcomed the breakthrough on the Afghan-Taliban talks, amid uncertainty over the alliance’s future in Afghanistan and urged for rapid progress on cease-fire and establishing a political road map.

“You can discuss whether it is a big or a small step, but the important thing is that it’s the first step,” Stoltenberg said, after chairing a videoconference of NATO foreign ministers. “It’s the first time actually that the Taliban and the Afghan government are able to sign a document agreeing on the framework, the modalities, for negotiations addressing a long-term, peaceful solution.”

NATO has roughly 11,000 troops in Afghanistan, but under the U.S.-Taliban deal, all foreign troops would leave the country by May 1 if conditions allow. Stoltenberg has said that NATO faces a “difficult dilemma” over what to do.

A decision on its future in Afghanistan, where NATO has led international security efforts since 2003 in the hope of keeping extremist groups at bay, is expected to be made in February after President-elect Joe Biden takes office.

The Taliban today control or hold sway over nearly half of Afghanistan and are at their strongest since the 2001 U.S.-led invasion toppled their regime over sheltering al-Qaida mastermind Osama bin Laden.

Many Afghans, particularly in larger urban areas fear a return of their repressive regime that harshly punished those who defied their strict Islamic edicts. Unlike when they ruled, the Taliban now say they will allow girls to go to school and women to work and hold public office, though they will not allow a woman to become president or a chief justice of Afghanistan’s Supreme Court. 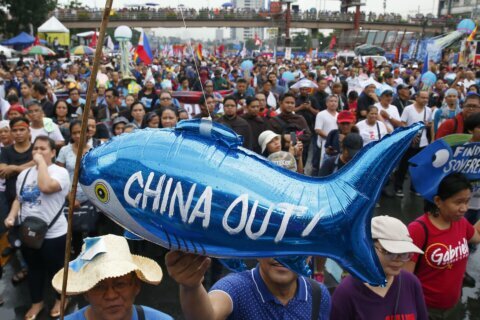