TOKYO (AP) — Japan’s Cabinet on Friday adopted a plan to enhance the country’s missile deterrence, including development of new cruise missiles, to counter potential threats from China and North Korea.

Under the plan, the first major defense policy issued by Prime Minister Yoshihide Suga’s government, Japan is to develop new extended-range missiles that can be fired from destroyers or fighter jets.

They would allow Japan to expand missile deterrence in areas including islands it controls in the East China Sea that are also claimed by Beijing.

“The security environment around the southwestern islands is extremely harsh, with China’s warship activity becoming increasingly active,” Defense Minister Nobuo Kishi said at a news conference. “In order to counter that we need to respond appropriately.”

Kishi said the missiles’ extended range would allow them to be deployed far enough away from an enemy to avoid an immediate strike back. He did not give further details of the missiles, including their range, location or the timing of their deployment.

Tokyo has repeatedly called the two countries threats to regional security and has studied the possibility of developing a first-strike capability against enemy bases to defend against imminent attacks.

The Cabinet said the government will further study the missile deterrence plan, without clarifying whether the controversial first-strike capability is still being pursued.

Opposition leaders said the missile plan could violate Japan’s war-renouncing constitution, which limits use of force to self-defense.

The Cabinet on Friday also said it plans to place Aegis radar systems on two new destroyers to step up missile deterrence after Japan earlier this year scrapped plans to build two land-based Aegis systems due to technical problems.

The deployment of the Aegis radars on the warships could cost as much as 500 billion yen ($4.8 billion), more than twice as much as their land-based counterparts, which were projected to cost about $2 billion.

Japan is developing its own next-generation F-X stealth fighter to replace its aging fleet of F-2s. Kishi said it has chosen Lockheed Martin as a main candidate to provide integration support for increased interoperability with the U.S. The defense ministry has chosen Mitsubishi Heavy Industries as its main contractor and is currently negotiating with the U.S. and Britain for cooperation in engine and electronics production. 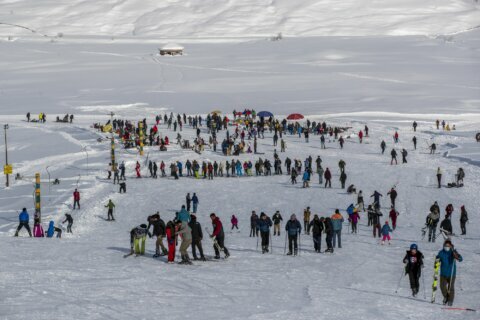