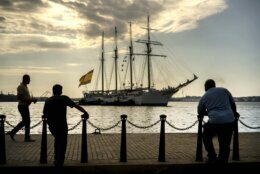 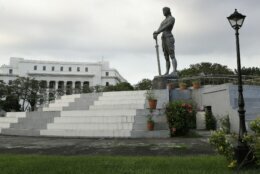 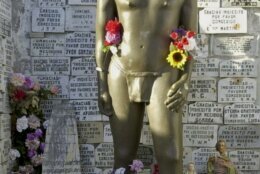 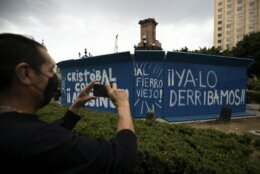 The Juan Sebastián de Elcano, named for a Basque captain who completed the 1519-1522 circumnavigation with 17 of the roughly 240 crewmembers who began it, docked around Latin America after leaving Europe in August. Visitors were not allowed on board and the crew disembarked in just a few places, including the Chilean island of Dawson in the Strait of Magellan and San Lorenzo island in Peru.

“This was possible after confirming that the environments were completely free” of COVID-19, Lt. Luis Martínez García, the ship’s public information officer, emailed from the vessel. The ship departs across the Pacific from Mexico on Friday.

Magellan’s expedition for Spanish trade and imperialism opened a westward route from Europe to the Spice Islands, the Maluku archipelago in today’s Indonesia. The epic story invites appreciation for conflicting, overlapping perspectives on history as well as the rewards and perils of a connected world.

It was “the first action humans took on a literally planetary scale,’’ said Joyce Chaplin, a professor of early American history at Harvard University and author of “ Round About the Earth: Circumnavigation from Magellan to Orbit.”

“Only by the 19th century was it a safer kind of journey, and this was when it became a popular pastime, as in Jules Verne’s ‘Around the World in Eighty Days,‘” Chaplin said. “Now, we worry, like those early circumnavigators, that maybe taking on the entire planet is a deadly business, given how our collective impact on the globe is destroying species and ecosystems.”

Magellan crossed the strait between the Atlantic and Pacific oceans that has his name in modern Chile, where President Sebastián Piñera recently said the voyage was about “knocking down walls and building bridges where today ideas, people, knowledge and culture flow freely.″

Magellan, a daring navigator with Portuguese military experience in Africa and Asia, was later spurned by Portugal, Spain’s rival, and distrusted by Spanish sailors in his fleet. While Magellan’s expedition exploited Indigenous people, Christopher Columbus is a far more divisive figure today for his role in the violent colonization of the Americas.

Magellan’s interpreter, an enslaved ethnic Malay called Enrique by the Spanish, has been commemorated in parts of Southeast Asia. Malay writer Harun Aminurrashid wrote “Panglima Awang,” a 1958 novel about him that contributed to regional identity as Malaysia broke with British rule.

Portrayed in European accounts as subordinate, the interpreter has since been discussed as a “diplomat and a linguist” who sparked interest in “Malay navigation skills, boat building and the expanse of Malay travels across the oceans,” Merican said.

Some speculate that the interpreter may have been the first person to travel around the world, in separate stages. That might have been possible if he continued west to his Malay homeland after Magellan died in an April 27, 1521, fight with warriors in what is today the Philippines. Some accounts from the time say the interpreter betrayed Magellan’s expedition after his death, though that narrative has been questioned.

In 2018, President Rodrigo Duterte of the Philippines designated April 27 as a national holiday to honor Lapu-Lapu, the chief whose men killed Magellan. Lapu-Lapu is admired for resisting foreign intervention and is the namesake of a widely eaten fish.

Magellan is credited with introducing Christianity in the Philippines, now the largest Roman Catholic nation in Asia. Yet he is lampooned in late comedian Yoyoy Villame’s song “Magellan,” whose lyrics imagine his last words: ‘’Mother, mother, I am sick/Call the doctor very quick/Doctor, doctor, shall I die?”

“We don’t aim to rewrite our history, far from it,” Celia Anna M. Feria, the Filipina ambassador in Portugal, said a year ago at a Lisbon conference on Magellan and the Philippines. But, she said, “We are taking the elements of our history apart’ and studying them.

Feria described “magnanimity and humanity” during Magellan’s time in what is now the Philippines, saying he was received on woven bamboo and palm mats by dignitaries (not including Lapu-Lapu).

History is about perspective, said Ambeth Ocampo, a Filipino professor who attended the Lisbon meeting. In a column in the Philippine Daily Inquirer, he said few details were recorded about Lapu-Lapu and so “history recedes into wishful or aspirational images of the hero” on monuments, in films, comics and even an advertisement for disposable baby diapers.

Jesús Baigorri Jalón, an academic at the University of Salamanca in Spain who was a United Nations interpreter, said Muslim, Jewish and Christian coexistence in what became Spain showed that cultural mixing was common long before Magellan’s expedition.

“The idea of ​​classifying ‘multicultural’ societies as a novelty of our times reflects ignorance or obliviousness of our history, that of the colonial powers and that of those that were colonized,″ Baigorri Jalón said.

By showing that anywhere in the world was reachable over water, Magellan and his crew inadvertently demonstrated the connections shaping humanity today, said Laurence Bergreen, author of “ Over the Edge of the World: Magellan’s Terrifying Circumnavigation of the Globe.”

“There was this singular event of 9/11 which the whole world reacted to, and you have the sense that the whole world was in some ways connected and vulnerable in some ways as well,” said Bergreen, who worked on the book around the time of al-Qaida’s Sept. 11, 2001, attacks in the United States.

“Well, now it’s 20 years later almost, and there’s a pandemic, but it’s sort of the same thing that there are events that occur globally that affect everyone,” he said. “And so there’s a sense of a kind of a shared destiny among people who would otherwise not be aware of other people, or really wouldn’t care much about them.″

The Spanish navy vessel on the commemorative trip is a “small city″ with engine power, a satellite system, garbage and wastewater treatment, a medical team, fresh bread every morning, and movies and other leisure activities, deputy commander Fernando García said in a Dec. 13 blog post.

Referring to pandemic disruptions, García said that ″while other nations have canceled or postponed similar trips, Spain keeps it going, emulating the great feat completed 500 years ago.”

Currently docked in Mexico’s Manzanillo port, the four-mast ship is scheduled to return to Spain in July, ending an 11-month circumnavigation. 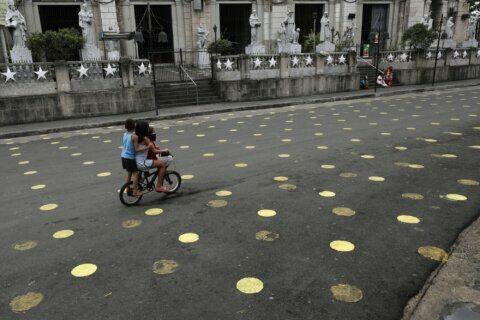