The call went out from states: Masks, gowns, gloves and other personal protective equipment were needed fast in the battle against the new coronavirus.

Many businesses that jumped in to help this spring soon found themselves facing delays from suppliers and, in some cases, having orders canceled by states too impatient to wait.

States scrambling to acquire personal protective equipment, or PPE, ended up halting billions of dollars worth of orders this spring, sometimes sticking businesses with huge costs they can’t recoup, according to an Associated Press analysis of states’ purchasing data.

“It was a nightmare, it was an absolute nightmare,” said Christian Weber, CEO of Advanced Shelter Systems Inc., which saw Texas cancel a contract to supply millions of KN95 masks, similar to the N95 that filters out tiny particles.

Seven months later, “we’re still working through a lot of the financial issues,” he said, “and there’s a good chance that we might go out of business because of it.”

Based on data obtained through open-records requests, the AP tallied more than $7 billion in purchases by states this spring for personal protective equipment and high-demand medical devices such as ventilators and infrared thermometers.

The AP did not specifically request details on canceled contracts, but one-third of the states voluntarily provided data totaling more than $3 billion in canceled orders. Respirator masks like N95s were among the hardest-to-find items and the most frequently canceled, accounting for about one-third of all halted orders in those states.

The cancellations came as manufacturers experienced backlogs, and purchasers often had to work through intermediaries who would reroute products to whoever would pay the most the fastest. Bottlenecks emerged getting supplies out of China. And prices for air cargo rose with demand because states were reluctant to wait the weeks it would take to ship products by sea.

Texas Emergency Management Division spokesman Seth Christensen said states this spring were dealing with numerous new suppliers trying “to make a quick buck” off of states that were having trouble importing products to the U.S.

“A lot of people were making a lot of big promises at the time about what they could or could not get us,” Christensen said. “When they couldn’t meet our strict deadlines … we were canceling those purchase orders, and they were being filled by others who were able to actually meet and get us the product.”

That’s what happened to the mask order from Advanced Shelter Systems. The Napa, California-based company specializes in rapid-setup tents, but when its supply factory in China was commandeered by the government to make personal protective equipment, Weber said it had to pivot to stay in business.

Weber reached out to a friend, Griff Reid, CEO of Composite Technology International, a Sacramento-based company that sells wooden millwork products made in Southeast Asia. The two teamed up on a pair of multimillion-dollar Texas contracts to supply 500,000 coveralls and 10 million KN95 masks, among other items.

Reid said he fronted the money to manufacture the products in China and had to truck them to Hong Kong to get them on a plane. An initial shipment of coveralls made it to Texas. But while the rest was en route, Texas canceled the orders because the contracts’ deadlines had passed.

Reid said he had connections that allowed him to redirect the coveralls to California. The AP’s data includes nearly $78 million in sales of coveralls and masks to California by Composite Technology International.

But Reid said about 7 million KN95 masks originally meant for Texas are still sitting in warehouses, their market value now substantially less than what he paid for them.

“Right now, as much as I’d like to say it’s been a great year for me on PPE … I’ve actually lost money, I’m still upside down,” he said.

Texas and Louisiana each canceled more than $400 million in personal protective equipment and ventilator orders this spring, an amount larger than the total orders of most states, according to data provided to the AP.

California’s data includes nearly $2 billion in cancellations this spring, including half of a highly publicized $990 million deal with Chinese electric vehicle maker BYD after the company couldn’t get its N95 masks certified by the U.S. government in time to meet California’s deadlines.

Some businesses lost orders because states were unwilling to pay higher prices companies were being charged by their suppliers.

NUYU Inc., an Edgewater, New Jersey-based company that sells Korean skin care products, had agreed to sell Louisiana 500,000 face shields at $1.50 each. But NUYU consultant Jin Choi emailed the state on April 9 to say shipping “costs have increased more than 8 times” and their suppliers were demanding payment upfront, according to documents the state provided.

Choi asked whether Louisiana would either pay 50% upfront or agree to cover the higher shipping costs. Instead, Louisiana canceled the order. Fortunately for NUYU, the cancellation occurred quickly enough to avoid losing money, Choi said.

For other companies, their first venture into selling personal protective equipment is still causing headaches.

Hadley Development, a Wichita, Kansas-based company that makes outdoor clothing, said it was stuck with 600,000 N95 masks after Texas declined to accept its order in late May. The shipment was nearly two months late, well short of the 2 million masks in the original contract, and came in packaging that said the masks were for nonmedical use.

Texas officials looked at the labeling and rejected the masks to protect health care workers from a potentially unsafe product, Christensen said.

Hadley CEO Michael Northrup said that despite the labeling, the masks meet all requirements. He’s still trying to revive the deal.

“I’m not looking to make anything, I just want to prevent myself from losing a couple million bucks,” Northrup said. 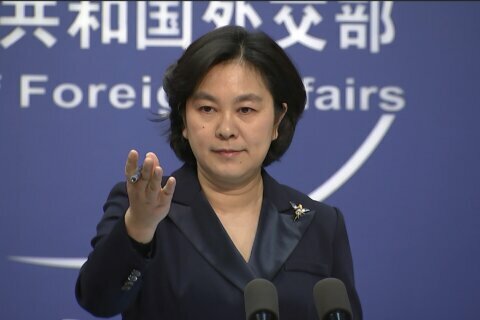 China hits Trump officials with sanctions on their way out