SEOUL, South Korea (AP) — South Korea has reported 950 new coronavirus cases, its largest daily increase since the emergence of the pandemic, as fears grow about overwhelmed hospitals in the greater capital area.

The figures released Saturday brought the country’s caseload to 41,736, after health officials added more than 8,900 cases in the last 15 days alone. Six COVID-19 patients died in the past 24 hours to bring the death toll to 578.

Nearly 680 of the new cases came from the densely populated Seoul metropolitan area, where health workers have struggled to track transmissions popping up from just about everywhere, including hospitals, long-term care facilities, restaurants, saunas, schools and army units.

Infections were also reported in other major urban centers, including Busan, Gwangju, Daejeon, Ulsan and Daegu, a southeastern city that was the epicenter of the spring outbreak.

The government had eased its social distancing restrictions to the lowest tier in October despite experts warning about a viral surge during colder weather, when people spend longer hours indoors.

Officials restored some restrictions in recent weeks, such as shutting nightclubs and allowing restaurants to provide only deliveries and takeouts after 9 p.m., and could be forced to clamp down on economic activity further.

Prime Minister Chung Sye-kyun said South Korea may have to elevate social distancing restrictions to the highest level, which includes a ban on gatherings of more than 10 people, school closures, a halt to to professional sports and requiring companies to have most of their employees work from home.

President Moon Jae-in in a Facebook message apologized for his government’s failure to contain the outbreak despite months of measures that hurt the economy. He pleaded for vigilance, saying the country was going through its “last crisis before the arrival of vaccines and treatment.”

Health officials are also trying to ramp up testing and prevent the virus from being spread by those with mild or no symptoms.

From Monday, rapid antigen tests at emergency rooms, intensive care units and remote hospitals will be covered by the national health insurance, which would cost recipients about 8,000 won ($7) each.

Antigen tests and another form of rapid testing based on saliva samples will also be available at designated sites in the capital area free of charge and regardless whether people are symptomatic.

In other developments in the region:

— Tokyo reported 621 new coronavirus cases Saturday, setting a new record in the capital where a lack of government measures triggered concerns about a surge during the holiday season. Nationwide, Japan reported a total of 174,000 cases, with about 2,500 deaths. Experts on a Tokyo metropolitan task force say serious cases are on the rise, putting burdens on hospitals and forcing many of them to scale back on care for other patients. Japan issued a non-binding state of emergency in the spring and has survived earlier infection peaks without a lockdown. The coronavirus task force on Friday asked the national government to take tougher steps to slow social and economic activities, such as suspension of out-of-town trips and requesting shorter business hours in areas where infections are accelerating. Latest data shows that ongoing measures have been ineffective and the situation could worsen during the holiday season.

— New Zealand and the Cook Islands say they plan to have a travel bubble in place early next year, which will allow people to fly between the two countries without going into quarantine. The arrangement would represent the first travel bubble that New Zealand has agreed to since closing its borders when the coronavirus first hit earlier this year. New Zealand has moved cautiously on restarting international travel after stamping out community spread of the virus. Australia is currently allowing many New Zealanders to arrive without going into quarantine but that arrangement isn’t yet reciprocal. The Cook Islands, with a population of only about 10,000, is self-governing but has close ties to New Zealand under a free-association arrangement, and its economy relies on New Zealand tourists.

— The Australian state of Queensland on Saturday welcomed travelers from New Zealand, who for the first time in 10 months were supposed to enter without having to quarantine. But the first flight didn’t go according to the plan. Premier Annastacia Palaszczuk reopened the state to New Zealand from 1 a.m. Saturday, saying residents would no longer need to abide by COVID-19 travel restrictions. When the flight touched down in Brisbane, passengers were whisked away in busses to begin a mandatory 14 days in hotel quarantine. A spokesman for the premier said the travelers had arrived on a “red” flight, which included passengers from other countries. “So all the passengers on that plane have to go into hotel quarantine because you had Kiwis sitting next to people from the United States, for example,” he said. Passengers from New Zealand on the flight were told they would need to quarantine before takeoff and had the option to wait for a “green” flight with only New Zealanders aboard, he said. Queensland Chief Health Officer Jeannette Young said the first quarantine-free flight from New Zealand was due to arrive on Wednesday. More than 200,000 New Zealanders live in Queensland, the popular destination for those wanting to escape blustery southern hemisphere winters or visit relatives in the subtropical and tropical state, making them the largest group of foreign-born residents. The decision to lift travel restrictions came after New Zealand went 28 days without a local case. While people from New Zealand can enter Queensland freely, they will still have to go into managed isolation or quarantine when they return home.

— Eight mainly Western nations accused North Korea of using the pandemic “to crack down further on the human rights of its own people,” pointing to reports of an uptick in executions related to the coronavirus and strict controls on movements in and around the capital. Their statement was read virtually after the U.N. Security Council discussed North Korea’s human rights situation behind closed doors on Friday. Germany had sought an open meeting but Russia and China, both neighbors of North Korea, objected. Seven council members — Germany, Belgium, Dominican Republic, Estonia, France, United Kingdom and United States — joined by Japan said in the statement that North Korea was putting nuclear power and military might over its people. The government’s decision “to prioritize its weapons programs over the needs of its people and their isolation from the international community, is inevitably worsening the impacts of the pandemic on the North Korean population,” they said. North Korea sealed its border with China, its biggest trading partner and aid benefactor, as the coronavirus started spreading in January. Kim Jong Un’s government maintains it hasn’t found a single coronavirus case on its soil, a claim disputed by outside experts. 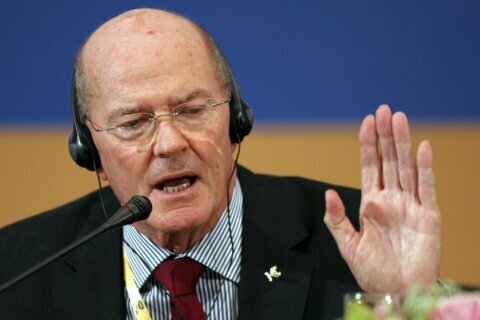