TOKYO (AP) — The defense team for former Nissan executive Greg Kelly began questioning a key prosecution witness in a Tokyo court this week, seeking to show the alleged underreporting of income of his boss Carlos Ghosn was devised by others at the automaker.

Since the trial began in September, Kelly has only presented a brief opening statement insisting on his innocence. In questioning Toshiaki Ohnuma, who was in charge of compensation at Nissan, defense lawyer Yoichi Kitamura sought to show that Ohnuma, at the order of higher-ups at Nissan, devised plans to obscure exactly how much Ghosn would be paid, knowing they might be improper in Japan.

Legal repercussions of the scandal at Tokyo-based Nissan over alleged underreporting of Ghosn’s compensation and breach of trust have fallen only on Kelly and on Nissan itself, which is not fighting the charges and has paid a fine. None of the other executives testifying in the case have been charged.

Ghosn jumped bail and fled the country for Lebanon late last year, saying he feared he could not get a fair trial.

So far, the dozens of hours of questioning at the Tokyo District Court, with everyone’s speech muffled under masks because of the coronavirus, have centered on Nissan’s efforts to meet Ghosn’s demands for higher compensation without publicly disclosing the full amount.

Prosecutors have sought to show Kelly, who became the first American to join Nissan Motor Co.’s board in 2012, violated financial reporting laws even though none of the plans the Nissan management considered were ever acted upon or decided.

In cross-examining Wednesday, Ohnuma told the court that Kelly did not know how much Ghosn was paid, as that was highly confidential at Nissan. The testimony suggested Kelly played a minor role in being consulted to study legal ways to pay Ghosn.

Ghosn was sent by Nissan alliance partner Renault SA of France to help turn the automaker around in the late 1990s as it was sliding toward bankruptcy. The Brazilian-born executive, who also has French and Lebanese nationality, led a spectacular turnaround and was rewarded with compensation that even at the lower, publicly disclosed levels, was exorbitant by Japanese “salaryman” standards.

Beginning in 2010, Japan started requiring public reporting of individual executives’ pay over 100 million yen ($1 million) in securities reports. Documents presented at the trial show Ghosn returned about half his annual pay of nearly 1.9 billion yen ($19 million), to keep the disclosure at under 1 billion yen ($10 million).

On Tuesday, Ohnuma said Nissan considered various strategies for paying Ghosn, including through a joint venture with Renault, a paper company in the Netherlands, stock options, retirement allowance and consulting fees.

Asked if he knew what he was doing might be improper, Ohnuma acknowledged “efforts to deceive,” and said he was torn over the issue but anxious to keep his job. He told Kitamura he assumed Ghosn also knew the acts were wrong.

“I thought Ghosn-san sure had a way of doing things; I can’t express it any other way,” Ohnuma said.

Ghosn and Kelly were arrested in November 2018 before any decisions on the compensation plans were made. Auditors and tax authorities started raising questions and nothing was acted on, according to the court testimony.

Prosecution for falsifying financial reports is rare in Japan and the charges lie in a gray area, according to some legal experts. If convicted, Kelly faces up to 15 years in prison on multiple counts of the charge of falsifying securities statements. Japan has a 99% conviction rate.

Kelly’s trial is expected to last about a year.

The main target in the case, Ghosn, was also facing more serious breach of trust charges but has escaped the prosecutors’ reach, noted Stephen Givens, a corporate lawyer based in Japan.

“There is no question that Greg Kelly is a victim of a very serious injustice,” Givens said. “He was just one member of a team that was trying to come up with a solution.”

Separately, Japanese prosecutors are seeking the extradition of two Americans who are being held on suspicion they helped Ghosn escape, Michael Taylor and his son Peter.

As for Ghosn, he launched an official web site last week, asserting his innocence, accusing Japan of “hostage justice” and plugging his new book, “Time for the Truth,” billed as a personal drama, industrial tragedy and political-judicial thriller.

Nissan is due to report its latest earnings on Thursday. 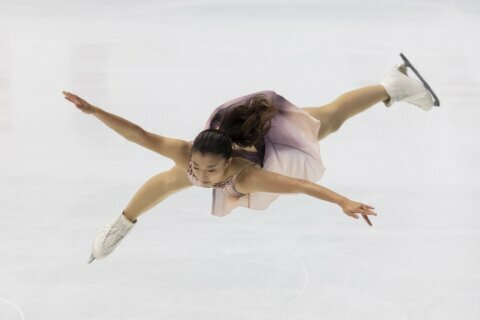