TOKYO (AP) — Japan’s foreign minister announced Friday that his Chinese counterpart will visit Tokyo next week to discuss ways to revive their pandemic-hit economies as well as regional concerns over China’s growing influence.

“There are various issues of concern between Japan and China, and it is important that we resolve them one by one through high-level meetings like this,” Japanese Foreign Minister Toshimitsu Motegi said. “I hope to frankly exchange our views on regional issues, the global expansion of the coronavirus pandemic, as well as other international issues.”

During his Nov. 24-25 visit, Chinese Foreign Minister Wang Yi and Motegi are expected to discuss resuming business trips between the world’s No. 2 and No. 3 economies through a “business track” program that would allow visitors to engage in limited business activity during 14-day quarantine periods. Japan recently launched such arrangements with South Korea and Vietnam.

Motegi noted that Chinese visitors topped the number of tourists in Japan before the pandemic and said he hoped to discuss how they can resume travel while taking disease prevention measures.

He said the two countries are not currently considering rescheduling Chinese President Xi Jinping’s state visit to Japan, postponed from the spring due to the pandemic, because they are focusing on their fight against the pandemic.

Relations between the two countries have been strained over territorial disputes and wartime history. But ties have improved in recent years while China’s trade dispute with the U.S. has escalated. Japan, a key U.S. ally, sees China as a crucial trading partner and faces the challenge of balancing its relations with both nations.

He said Wang will also visit South Korea during his Nov. 24-27 trip.

The visit comes amid growing concerns stemming from China’s increasing influence in the region.

Australian Prime Minister Scott Morrison held talks this week with Japanese Prime Minister Yoshihide Suga in which they agreed to step up their military partnership and cooperation to promote peace and stability in the Indo-Pacific region as a counter to China’s rise.

The two countries, along with the U.S. and India, are also trying to bring in Southeast Asian nations and others to join their cooperation, which Beijing has criticized as an attempt to form an “Asian NATO” to counter China.

Chief Cabinet Secretary Katsunobu Kato told reporters Friday that the vision, known as “Free and Open Indo-Pacific,” is not targeting a specific nation and “we plan to achieve it by cooperating with any country that shares the view.”

Motegi said a meeting is being arranged between Wang and Suga during his visit, the first with a Japanese prime minister by a top Chinese official since the February visit of Chinese foreign policy chief Yang Jiechi.

AP researcher Liu Zheng in Beijing contributed to this report. 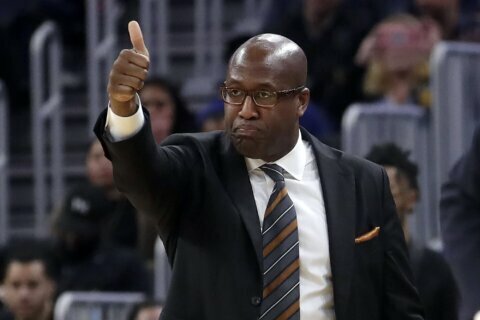