Pompeo, in Indonesia, renews China attacks as US vote looms

With China a central theme in President Donald Trump’s campaign to win a second term in just five days time, Pompeo took aim at Chinese aggressiveness in the South China Sea, where it has advanced maritime and territorial claims over the objections of its smaller neighbors, over its handling of the coronavirus pandemic and its repression of religious minorities.

Speaking in Jakarta, the headquarters of the Association of Southeast Asian Nations, Pompeo praised Indonesia’s leadership in ASEAN for pushing back on what he called China’s “unlawful” claims and lauded Jakarta’s protection of its own territory. He also attacked Beijing for its treatment of religious minorities, calling China “the gravest threat to the future of religious freedom.”

Delivering a speech on religious freedom in the capital of the world’s most populous Muslim nation, Pompeo denounced the Chinese Communist Party for its reported mass abuses of Muslim minorities in the western Xinjiang region.

“The atheist CCP has tried to convince the world that its brutalization of Uighur Muslims in Xinjiang is necessary as a counterterrorism efforts or poverty – depending on the audience, they are speaking to,” Pompeo said. ”I know the Chinese Communist Party has tried to convince Indonesians to look away from the torments your fellow Muslims are suffering.”

He dismissed as fantasy Chinese officials’ claims that Uighurs are “eager to discard their ethnic, religious and cultural identities to become ‘modern’ and enjoy the benefits of CCP-led development” and urged Indonesians to reject them.

Earlier, in an appearance with Indonesian Foreign Minister Retno Marsudi, Pompeo took China to task for threatening its neighbors.

“We respect freedom of the seas, sovereignty and the rule of law,” he said, standing beside Marsudi. Marsudi agreed, saying “any claims should be based on universally recognized principle of international law” although she did not specifically mention China.

“Our law-abiding nations reject the unlawful claims by Chinese Communist Party in the South China Sea as is clear from Indonesia’s courageous leadership on this subject within ASEAN and at the United Nations,” Pompeo said. “It’s a cause worth pursuing in multilateral settings and the Trump administration very much supports this.”

Earlier this year, the Trump administration clarified its longstanding policy on the disputes by rejecting outright nearly all of Beijing’s maritime claims in the South China Sea. That decision in July came as Trump began a concerted effort to use China as a campaign cudgel against his Democratic challenger, former Vice President Joe Biden, who he paints as weak on China and beholden to it.

Previously, U.S. policy had been to insist that maritime disputes between China and its smaller neighbors be resolved peacefully through U.N.-backed arbitration. But in a July 13 statement, Pompeo said the U.S. now regards virtually all Chinese maritime claims outside its internationally recognized waters to be illegitimate.

China has pressed ahead with attempts to enforce its disputed claims in the South China Sea, leading to serious spats with Vietnam, the Philippines and Malaysia in recent years. It has ignored arbitration rulings that the disputes must be negotiated.

In making the U.S. announcement, Pompeo said China cannot legally claim the James Shoal near Malaysia, waters surrounding the Vanguard Bank off Vietnam, the Luconia Shoals near Brunei or Natuna Besar off Indonesia.

On Thursday, Pompeo said Indonesia’s protection of Natuna Besar was commendable example of “decisive action to safeguard its maritime sovereignty.”

“I’m looking forward to cooperating together in the new ways to ensure maritime security and protect some of the world’s busiest trade routes,” he said.

Pompeo arrived in Indonesia from the Maldives, where he announced the United States would for the first time open an embassy in the Indian Ocean archipelago, a move that reflects growing U.S. concern about increasing Chinese influence in the region.

“The Chinese Communist Party continues its lawless and threatening behavior,” Pompeo said in Male, just hours after accusing China of being a ”predator” during his previous stop in the Sri Lankan capital of Colombo.

“The Chinese Communist Party is a predator,” he said.

Responding to Pompeo’s remarks, Chinese foreign ministry spokesperson Wang Wenbin said the secretary of state’s true intention was to “let China fall back to an era of poverty and un-development, and let the world fall into the abyss of confrontation and division.”

“This is just the biggest threat facing the world today. But regrettably, Pompeo was born in the wrong time. The trend of peace, development, cooperation and win-win in this era is irresistible,” Wang told reporters. 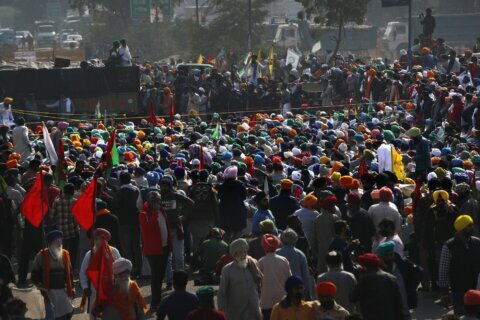