HONG KONG (AP) — U.S. Secretary of State Mike Pompeo defended the 12 Hong Kong residents who were detained by China while allegedly trying to flee to Taiwan by boat in August, saying that they had “committed no crime.”

“They simply believe that they are worthy of freedom and the unalienable rights due to every person,” Pompeo said in virtual remarks delivered at the John S. McCain Freedom Award Ceremony on Wednesday. “They aren’t alone in that belief. America stands with them.”

The 12, some of whom are linked to anti-government protests and were facing charges in Hong Kong prior to their arrest, are being held in the southern city of Shenzhen where they await prosecution.

The group was believed to have been headed for self-governed Taiwan when they were arrested, following China’s imposition of a sweeping national security law targeting political expression in semi-autonomous Hong Kong. Taiwan is a popular choice among Hong Kong residents looking to leave the city.

Relatives say that they are being held incommunicado and have not been granted access to family-appointed lawyers.

Pompeo’s remarks come as Hong Kong police last week arrested nine others who are suspected of assisting the 12 to leave the city. The group of nine is believed to have provided accommodation and transport.

Hong Kong leader Carrie Lam has repeatedly said that the 12 people detained must face the law in mainland China, as they were arrested for offences there. Though Hong Kong is part of China, it has a separate judicial and immigration system from the mainland, with separate border controls. 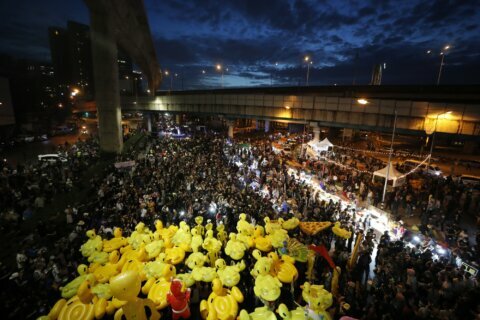