ISLAMABAD (AP) — Pakistan’s army chief Tuesday ordered an investigation into allegations that a provincial police chief was kidnapped by army troops to force him to order the arrest of the son-in-law of exiled former prime minister Nawaz Sharif.

In a statement, the military said army chief Gen. Qamar Javed Bajwa ordered the military commander in the port city of Karachi to begin a probe into the accusation.

Safdar was freed after a court granted him bail, but controversy ensued amid allegations he was arrested by paramilitary Rangers after they pressured provincial chief Mushtaq Mehar to sign orders for Safdar’s arrest.

Neither the Rangers nor Khan have commented, but some police officers, angered over Mehar’s treatment, applied for a leave of absence in response to the alleged mistreatment of the police chief. Officials say police had initially refused to arrest Safdar.

Mehar, in a brief statement, said he too considered taking a leave of absence, but changed his mind and asked his officers to defer going on leave for 10 days to give authorities a chance to investigate the matter. He did not say who abducted him or who forcibly took him to the offices of the Rangers.

In a series of tweets, Sindh provincial police said the “unfortunate incident” had “caused great heartache and resentment within all ranks of Sindh Police.” Police thanked the army chief for ordering an investigation into the incident.

At the demonstration, Safdar had led a crowd in chanting: “Give respect to the vote!” That slogan is viewed in Pakistan as criticism of the country’s military, which ruled Pakistan directly or indirectly for most of its history.

Safdar’s father-in-law, Sharif, also has had a long, uneasy relationship with the military. Sharif served as Pakistan’s prime minister three times. A court in 2017 ousted him from power over corruption allegations. He has been staying in London since November after being allowed to receive medical treatment abroad.

The Latest: Germany vows that virus vaccines will be safe 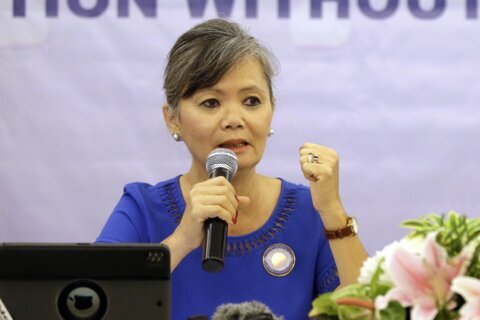