HONG KONG (AP) — Police in Hong Kong said Saturday they have arrested nine people on suspicion of providing funds and other assistance to a group of 12 who sought to flee the territory by boat in August but were intercepted by Chinese authorities.

A police official said the nine, including four men and five women, were believed to be friends of those in the earlier group.

They were arrested on the charge of assisting offenders and believed to have also arranged for the boat and furnished transport and accommodation, Ho Chun-tung of the Organized Crime Division told reporters.

“That means they might have done something to prevent prosecution of these people or to prevent them from being arrested by the police,” Ho said, referring to the 12 detained in August.

They are also looking into whether these nine people had helped others to flee the city, and are not ruling out more arrests.

The 12 were believed to have been headed for self-governing Taiwan following China’s imposition of a sweeping national security law targeting political views in Hong Kong that diverge from those dictated by Beijing. China has said they are being held in the city of Shenzhen awaiting prosecution, but authorities have released few details.

Though Hong Kong is part of China, it has a separate immigration system and there are border controls between the territory and the mainland.

Ho said the 12 detained by mainland Chinese authorities were suspected to have contravened the laws within the mainland, and that their arrests had “nothing to do with the Hong Kong police.”

Taiwan in July opened an office to help Hong Kong residents who wish to emigrate. The self-governing island democracy is a popular choice among protesters who have chosen to leave Hong Kong since the passage of the new law in June. 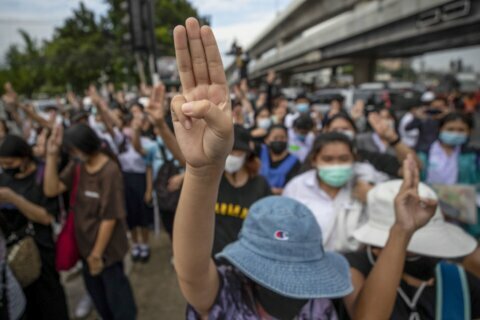