Fifteen of the 76 latest cases reported by the Korea Disease Control and Prevention Agency were from the southern port city of Busan, where more than 70 infections have been linked to a hospital for the elderly.

The disease caused by the coronavirus can be more serious in older people and those with existing health conditions like high-blood pressure.

Health workers have been scrambling to track infections in the Seoul metropolitan area, home to about half of the country’s 51 million people, as the virus spreads in a variety of places, including hospitals, churches, schools and workplaces.

From Monday, they will start a process to test 130,000 workers at hospitals, nursing homes and senior centers in the greater capital area. Officials will also test 30,000 patients who have visited and used these facilities, but will leave out hospitalized patients, who already receive tests when they are admitted.

Officials plan to complete the tests within October and could possibly expand the screening to other regions if needed.

South Korea has confirmed 25,275 cases of coronavirus infection, including 444 deaths from COVID-19.

— India has reported 579 fatalities from COVID-19 in the past 24 hours, the lowest increase in three months, driving its death toll to 114,610. The Health Ministry on Monday also reported 55,722 more people infected, raising India’s total to more than 7.5 million. A government-appointed committee of scientists said Sunday the disease was likely to “run its course” by February if people used masks and adhered to distancing measures. The number of new infections confirmed each day has declined for a month. The committee said even if active cases increased during the upcoming festive season and cold weather, they were unlikely to surpass India’s record daily high of 97,894 cases.

— China’s economic growth accelerated to 4.9% over a year earlier in the latest quarter as a shaky recovery from the coronavirus pandemic gathered strength. China, where virus outbreaks began in December, became the first major economy to return to growth with a 3.2% expansion in the quarter ending in June. Output contracted 6.8% in the first quarter. The ruling Communist Party began easing anti-disease controls and reopening factories, shops and offices in March after declaring the virus under control but has kept monitoring and some travel controls in place. 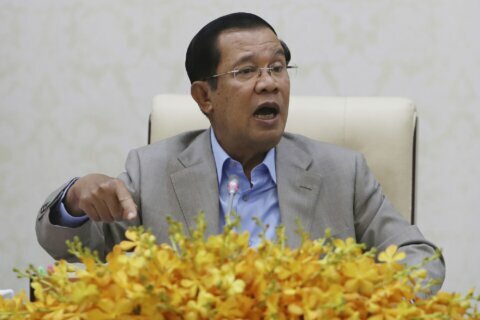