Asia Today: Australia to spend on vaccines for wider region

CANBERRA, Australia (AP) — Australia has announced it will spend 500 million Australian dollars ($351 million) to secure COVID-19 vaccines for the Pacific and Southeast Asia “as part of a shared recovery for our region from the pandemic.”

The government said it would use a range of advance purchase agreements with manufacturers via the global COVAX Facility plan, which aims to ensure virus vaccines are shared with all nations.

“We are committing an additional AU$500 million over three years towards this effort,” it said. “The funding will further help ensure that the countries of the Pacific and East Timor are able to achieve full immunization coverage, and will make a significant contribution toward meeting the needs of southeast Asia.

“A fast, safe vaccine rollout … will mean we are able to return to more normal travel, tourism and trade with our key partners in the region.”

Meanwhile, officials in Victoria state reported just one new case of COVID-19 on Saturday as Melbourne residents head into a weekend of greater social freedom.

Figures from the state’s Health Department show an average of just 2.4 new cases per day for the past 14 days.

The easing of restrictions means families can visit each other at home. A 25-kilometer (15-mile) travel limit remains in place and outdoor gatherings are still capped at 10 people.

It will be an emotional weekend for many people who have been unable to see their families or close friends for months.

State premier Daniel Andrews did not face the media on Saturday, bringing his daily news conference marathon to an end. The state leader had held news conferences for 120 consecutive days starting on July 3.

— For the first time, Sri Lanka police have arrested dozens of people for not wearing masks and failing to maintain social distancing, under the new laws imposed to contain the spread of the coronavirus. Police spokesman Ajith Rohana said 39 people were detained, and separately, another 221 were held for violating a curfew. Since Thursday, the government has imposed the curfew in the whole of Western province where new outbreaks at a garment factory and the main fish market were discovered early this month. It includes the capital Colombo, where nearly 30% of the 22 million population live. Infections from the two clusters have grown to 6,945 by Saturday, bringing to over 10,000 the number of confirmed cases in the country including 19 deaths.

— India has registered 48,268 new confirmed coronavirus cases in the past 24 hours. The Health Ministry on Saturday also reported 551 additional deaths, taking total fatalities up to 121,641. The figure raises the country’s total virus tally to over 8.1 million, behind only the U.S. Over 7.4 million people have recovered. The slowdown in daily infections has held for more than a month with fewer than 60,000 cases for nearly two weeks. Some experts say the trend suggests the virus may have finally reached a plateau in India but others question the testing methods and warn a major festival due in a few weeks and the winter season could result in a new surge. The capital of New Delhi, which recently became the worst-hit city in India, is already witnessing high air pollution levels, making the coronavirus fight more complicated in months ahead.

— China has reported six new confirmed cases of COVID-19 in an outbreak in Xinjiang, bringing the total in the far-west region to 51. Six were in serious condition, Xinjiang health authorities said Saturday. Another 161 people have tested positive but show no symptoms. The outbreak in Shufu county, near the city of Kashgar, appears to be linked to a garment factory that employs 252 people and has been sealed off. China has largely curbed the spread of the coronavirus but continues to see localized outbreaks with infections in the hundreds. The National Health Commission also reported 27 new cases among people who had arrived recently from overseas. The total number of confirmed cases has reached 85,973, including 4,634 who have died. China does not include people without symptoms in its confirmed case count. 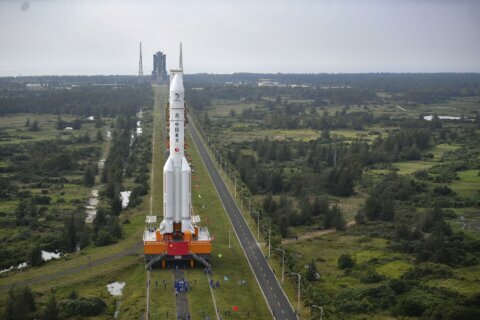