BANGKOK (AP) — A court in Thailand agreed with a police request to revoke the bail of two top leaders of the burgeoning anti-government protest movement who refuse to stop their public political activities.

The move to put Arnon Nampha and Panupong Jadnok in custody Thursday while police proceed with the cases against them was the first time the activists have been denied release on bail. They can be held for up to 48 days for police investigation without formal charges, but can also apply again for bail.

Arnon declined to do so at this time. The court offered Panupong release on bail — higher than he had previously posted — without his asking for it, but he turned down the offer.

The court said that it made the offer to Panupong, 24, because of his age and job — social work with youth. Arnon, 35, is a lawyer.

The two men had been granted bail last month for charges including sedition arising from a protest in Bangkok in July. Police say their continued involvement in demonstrations violated the terms of their release and asked the court to order them back into custody.

Both are key figures in the growing protest movement and are among those calling for reform of the monarchy, a revered institution that is protected by draconian anti-defamation laws.

Speaking to reporters before the hearing, Arnon said he hoped the court would allow him to walk free but believes his imprisonment will not deter the movement.

“If there is a political accident that puts me and Mike (Panupong) in jail, I will treat it as a complete proof of our participation in the movement, that we fought the best we could,” Arnon said. “Then, I hope that our imprisonment could serve as an inspiration for those who will continue fighting.”

The protests have emerged as the most serious threat to Prime Minister Prayuth Chan-ocha, a former army general whose administration is accused of incompetence and corruption.

The student-led movement has declared three core demands: holding new elections, amending the constitution and ending the intimidation of critics of the government. Some activists go further, calling for far-reaching reforms to the institution of the monarchy.

The authorities have taken legal actions against more than 30 key figures in the movement in an apparent attempt to decapitate it and stall its momentum. 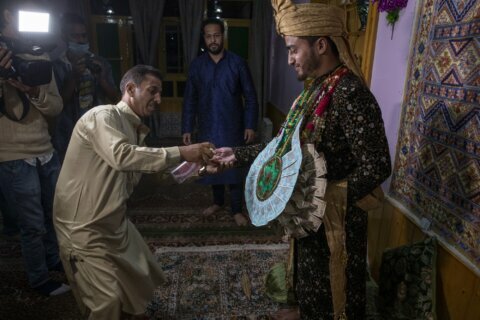