An offshore typhoon brought torrents of rain to southern Japan on Wednesday as it headed to the Korean Peninsula, while another storm in the Pacific grew stronger.
Listen now to WTOP News WTOP.com | Alexa | Google Home | WTOP App | 103.5 FM
(1/5) 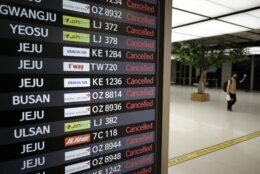 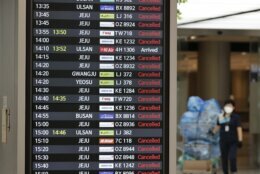 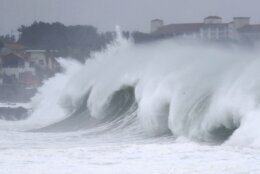 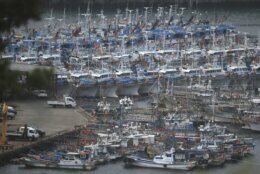 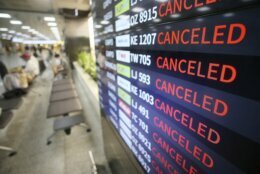 TOKYO (AP) — An offshore typhoon brought torrents of rain to southern Japan on Wednesday as it headed to the Korean Peninsula, while another storm in the Pacific grew stronger.

Japan’s main southern island of Kyushu was warned of heavy rainfall, fierce winds and possible mudslides. Maysak had halted trains and knocked out power to hundreds of homes when it crossed Okinawa on Tuesday.

Hundreds of flights were canceled in South Korea ahead of Maysak, while North Korea scrambled to protect its buildings, roads and crops from the second typhoon to hit the peninsula in as many weeks.

South Korea’s weather agency said the typhoon will affect most of the country and warned of potential damage from “very strong winds and very hard rain.” The storm was already lashing Jeju as it approached, knocking out electricity to more than 2,100 homes, toppling or damaging traffic signs, snapping trees, breaking windows and flooding highways. Cars splashed through wet roads amid heavy rain in the mainland coastal city of Gangneung. The Ministry of the Interior and Safety said there were no immediate reports of casualties.

At least 439 domestic flights in and out of Jeju and airports across the mainland were canceled as of Wednesday afternoon, the Korea Airports Corp. said. Authorities also closed national parks and moved more than 36,000 fishing boats and other vessels to safety.

North Korea’s official Korean Central News Agency said officials were working urgently to minimize damage from the typhoon, which was forecast to graze its eastern region before reaching land near the northeastern city of Chongjin.

Another storm in the Pacific was blowing north and forecast to affect northern Asia by the weekend. Tropical Storm Haishen, with sustained winds of up to 90 kph (56 mph), could gain in ferocity before slamming into Japan’s southern islands of Kyushu and Shikoku before reaching the Korean Peninsula on Monday.

Last week, Typhoon Bavi damaged homes, buildings and crops in the Koreas. South Korean authorities said no casualties were reported, and North Korean state media did not mention any deaths or injuries.