MITO, Japan (AP) — Among the challenges awaiting newly appointed Japanese Prime Minister Yoshihide Suga is the urgent challenge of how to keep the world’s third largest economy growing as its population ages and shrinks.

Yoshihide Suga, Abe’s former chief spokesman, was appointed prime minister on Wednesday after Abe resigned because of a chronic health problem. He has vowed to stick with the “Abenomics” playbook of cheap credit and stimulus spending, but has yet to articulate a vision for the future for a nation wary of the sweeping changes needed to keep the economy growing.

Suga appeared grim and determined in his first news conference as prime minister, pledging to work for the public and revive the economy.

It’s unclear he has the charisma and political heft to sell to the public and business world the kinds of changes needed to help the country break out of its slow decline.

“Whatever the rhetoric may be, the reality is the demographic angle,” said Michael Cucek, a politics professor at Temple University in Tokyo. “Japan’s horizons are shrinking.”

During Abe’s more than seven years in office, the central bank pumped tens of trillions of dollars into the economy, supporting a modest recovery that never gained the momentum needed to break out of the rut Japan has been in since its financial bubble burst in the early 1990s.

Meanwhile, the population has been falling for eight straight years and is projected to sink by about 40% by 2050.

The trends are evident in Tokyo, but even more so in smaller cities like Mito, 100 kilometers (about 60 miles) north of the capital. Countless small mom and pop style shopfronts remain shuttered for good, many unoccupied. The same is true for many houses around the city engulfed by vegetation after the owners died or moved away.

The outlook was clouding for most of last year, as tensions between the U.S. and China disrupted trade and global growth slowed. In October, a sales tax hike, to 10% from 8%, dented spending by consumers and businesses. Now, the “Corona shock” has hammered drivers of recent growth such as tourism and exports: in April-June the economy contracted at its worst ever rate of about 28%.

To prevent the economy from shrinking further, and bringing on lower incomes and deepening poverty, economists say the country needs to ramp up its productivity — the value it gets from the amount of labor and money invested — or to allow far more immigration than it has so far.

Despite the stellar efficiency of a few big companies like Toyota Motor Corp., the latest data show Japan 21st among 36 major economies in the Organization of Economic Cooperation and Development. Per hour productivity was about $47 per hour — between Slovenia and Slovakia — compared with about $75 per hour in the U.S. and more than $100 in Ireland, the world’s leader in productivity.

Low productivity translates into poor quality jobs and low wages: Household average incomes have actually fallen over the past 20 years and Abenomics’ tax breaks and easy credit have not brought the wage hikes needed to entice consumers into splurging on big ticket items like cars and new homes.

“Abenomics deserves credit for many things. Stock prices rose, and company earnings have improved. That’s great. But individuals’ incomes have not increased, and that’s also a fact,” said Shigeru Ishiba, a former defense minister who lost to Suga in the LDP leadership vote.

“It has not provided enough support for low-income earners… The people’s voices have not been fully heard,” Ishiba said.

Abe’s vow to make Japan a nation where women “shine” has likewise barely nudged the gender equality barometer: by this measure the country is dead last in the OECD. The poverty rate for single-parent households, overwhelming headed by women, was over 50%.

Suga’s background as the son of a strawberry farmer who worked to put himself through college has many in Japan thinking he might be more in touch with the problems of ordinary people than Abe and others politicians with elite backgrounds.

More of a pragmatist than conservative ideologue Abe, he has pledged to “protect jobs and businesses.”

While working as the chief government spokesman, Suga backed changes in visa policies to help along the tourism boom and increased competition among mobile phone carriers. He favors reforming regional banks that are key to local economies and has signaled interest in raising the minimum wage, which rose by just 1 yen (less than 1 cent) this year to 902 yen (about $8.50) an hour.

“Suganomics could include a much faster reorganization of the regional banking sector, higher immigration, and more aggressive hikes to the minimum wage,” said Tom Learmouth of Capital Economics. “That has the potential to lift productivity.”

More drastic changes in the tax code and other policies are needed, however to encourage businesses to grow in scale so that they can afford to invest in advanced technology and increase their efficiency, says David Atkinson, a former investment banker and government adviser.

Policies in place for the past 60 years have encouraged Japanese to stick to setting up tiny companies — average number of workers 3.4 — that have little capacity or incentive to invest in new equipment, Atkinson said in a recent web seminar held by the London-based International Institute for Strategic Studies.

So despite its image as a cornucopia of advanced technology, from bullet trains to AI to robotics and new materials, Japan is one of the least efficient countries among developed nations, and productivity has not risen appreciably for a half-century, he said.

Tackling that problem is politically tricky: Small businesses employ more than two-thirds of all Japanese, albeit inefficiently. But there’s little choice, Atkinson contends.

“If you don’t increase productivity, the economy will implode,” he said. 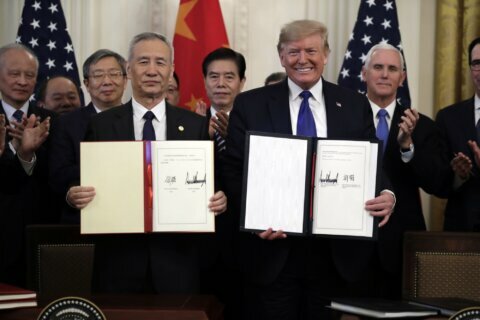 From Beijing to Brussels, Trump’s trade wars at a glance 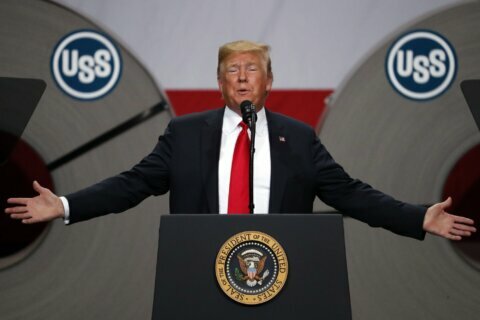