SEOUL, South Korea (AP) — The coronavirus forced 84-year-old Chung Seong-ran to do something new to celebrate South Korea’s Thanksgiving holiday instead of being visited by her daughter.

With a welfare worker’s help, Chung sent a video greeting to her daughter for the first time in her life.

“Please, always wear masks and be vigilant! Mommy is eating well and doing fine at home. I only worry about you. I love you,” Chung said in the 15-second video clip.

Many South Koreans are observing the Chuseok autumn holiday differently than in past years, when millions of people traveled to visit their hometowns.

Health authorities have for weeks urged people to refrain from traveling during the five-day holiday that begins Wednesday because increased mobility could spread the virus and threaten South Korea’s hard-won gains against COVID-19. A resurgence in the Seoul area in mid-August and September forced authorities to strengthen social distancing and other measures. The 38 new cases reported Tuesday were South Korea’s lowest daily increase in about 50 days.

“We’d like to ask everyone to build family bonds and say hello to each other in a non-contact manner during this year’s Chuseok for the safety of your families and all of us,” Health Minister Park Neung-hoo said at a recent virus briefing. “We can have video calls with each other or use video conferencing for family gatherings.”

Surveys of residents in the greater Seoul area — where more than half of South Korea’s 51 million people live — showed that most aren’t planning to visit relatives. But tens of thousands of tourists are expected to visit the southern resort island of Jeju, and about 95% of the rooms at six major hotels and high-end resorts on the east coast are already booked, according to tourism officials.

The government’s anti-virus steps during this year’s Chuseok include a ban on eating at restaurants at highway rest areas and the installation of plastic partitions at outdoor tables there. It will also charge expressway tolls, which were suspended during the holiday in past years. Authorities will also ban big folk festivals and encourage online memorial services for ancestors.

In many rural areas, large placards calling for fewer family gatherings during Chuseok have been hung along streets. A sign in the central city of Cheongju reads, “Let’s mark this Chuseok with online pilgrimages to ancestral graves and the sending of heartfelt gifts.”

Cheongju resident Shin Dae-sik, 83, said about 15 family members assembled for Chuseok in past years but they decided not to do so this week. “My sister-in-law is 95 so we decided not to gather for her” because elderly people are more vulnerable to the coronavirus, he said.

In the southeastern town of Uiseong where Chung lives, welfare workers were sent to help hundreds of elderly residents record and send video greetings to relatives in faraway places. Those elderly people live alone and most don’t have smartphones, so welfare workers used their phones to take videos and send their greetings to their loved ones.

Chung’s daughter, Kang Myoung Suk, said that when she received her mother’s message, she “felt really happy to see my mom on video as I had been only able to hear her voice on the phone.”

Chung stayed at Kang’s house in the Seoul area for about one month in June. But the two haven’t met since the virus outbreak worsened in the Seoul area. Chung said “my heart sank whenever I saw news about big outbreaks” near her daughter’s place.

Welfare workers often asked elderly residents to tell their relatives not to come during Chuseok in their video messages. But welfare worker Kim Yeon-hee, who shot Chung’s video, said she couldn’t do so when she helped 15 elderly people record their messages because she knows how much they miss their children. 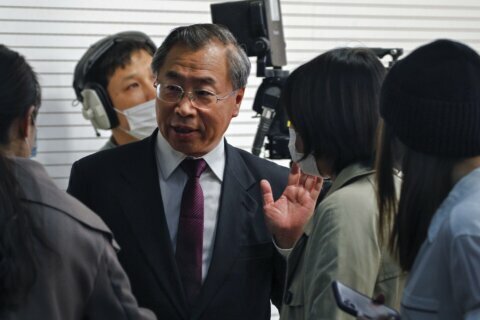