Hagiput was a typhoon with winds blowing up to 137 kilometers (85 miles) per hour at its center when it made landfall in Zhejiang province in the early morning. At noon, the tropical storm had winds of up to 108 kph (67 mph) and was moving north at around 25 kph (16 mph), China’s National Meteorological Center said.

No major destruction or injuries have been reported. State broadcaster CCTV showed trees toppled in the Zhejiang city of Yuhuan and the fire service said a panel truck had been blown on its side by high winds early Tuesday and its driver rescued.

As of Tuesday evening, the storm center was located near the city of Shaoxing, about 160 kilometers (100 miles) south of Shanghai, according to the meteorological center’s website. Shanghai was hot and windy in the evening with sporadic showers.

Forecaster Zhang Ling told state broadcaster CCTV that the storm was continuing to weaken as it moved.

“The effects will be felt (in China) through Wednesday,” Zhang said. However, rainfall will have peaked by the end of Tuesday, she said.

China had ordered evacuations of vulnerable coastal areas in Zhejiang and Fujian provinces to the south, recalled fishing boats and suspended ferry service and some trains.

In the major Zhejiang manufacturing center of Wenzhou, south of Shanghai, authorities reported evacuating 200,000 people to shelters and recalling more than 6,000 fishing boats to port. Waves along the coast were reported at heights of 4.2 meters (14 feet).

This year’s typhoon season has been relatively mild in China, although flooding since June along its major river systems has caused scores of deaths, forced around 2 million people to be evacuated and caused more than 49 billion yuan ($7 billion) in damage. 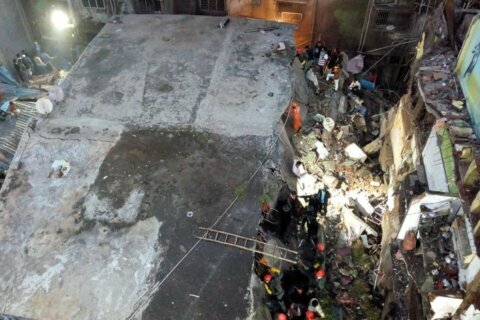